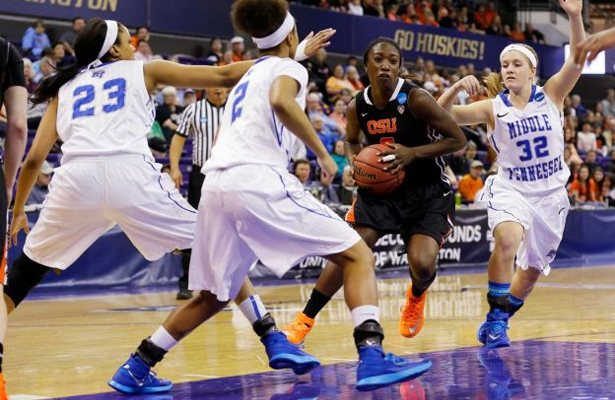 The Beaver’s women’s basketball team dominated in their first NCAA tournament victory since 1995.

On Sunday, the ninth-seed Beavers beat the eighth-seed Middle Tennessee 55-36. The team now has to play No. 1 seed South Carolina on Tuesday but the victory against Middle Tennessee is something the team intends to celebrate for as long as possible. [OregonLive]

The Winterhawks shut out Vancouver 3-0 in round one of the playoffs to go ahead 2-0. Goalkeeper Brendan Burke fended off 15 shots in the game. The teams will head up to Vancouver for the next game of the series. [Winterhawks]

The Thunder had a bit of a rocky start to their season with a 64-34 loss to the San Jose Sabercats last Monday. Despite the score, the team had many highlights in their first game and brought hope to a fairly large crowd. Kick returner and wide receiver Duane Brooks led the Thunder, with his main highlight being a 52-yard return to the Sabercats’ 2 yard line. [AFL]

History kept repeating itself as the Timbers once again fell 2-0 to the Colorado Rapids in Colorado on two penalty shots two minutes apart. They have never beaten the Rapids on their home turf. [USA Today]

The Blazers have been looking better despite LaMarcus Aldridge still being sidelined due to injury. They have won 2 of their last 3 but most recently fell hard to the Charlotte Bobcats 124-94. Although they are 6.5 games out of first place, they remain strong in second place in the division. [ABC]