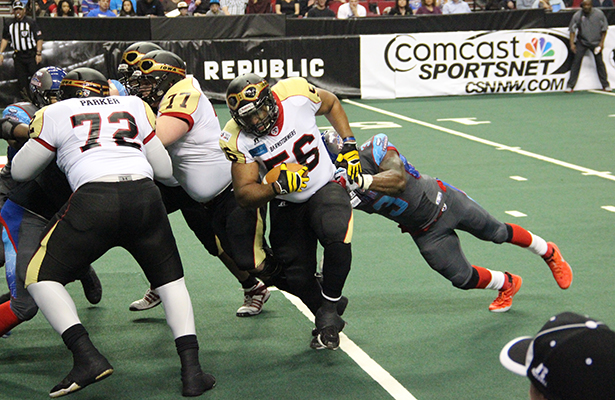 After big losses in week one, the Portland Thunder and Iowa Barnstormers battled for redemption at the Moda Center Monday, with the visiting Barnstormers eking out a victory in the final seconds, 40-36.

Interceptions and penalties by both teams consumed the low-scoring battle, but Iowa came out on top with a touchdown pass from Carson Coffman to Darius Reynolds to go up 40-36 with 53 seconds remaining. Darron Thomas began the Thunder’s final drive with three complete passes, but after four unsuccessful plays, the Thunder turned the ball over on downs to end the game.

Carson Coffman was on target completing 24 of 39 passes for 6 touchdowns and quickly answered every Portland touchdown to put Iowa back in the lead. Iowa’s Darius Reynolds led all receivers with 117 yards and 3 touchdown receptions. Portland’s quarterbacks Darron Thomas (19-31, 3 TDs) and Nathan Enderle (6-15, 1 TD) split time for the second game in a row.

Iowa rattled Portland’s offense in the first half, holding them to 9 points and intercepting four passes. Portland’s secondary also disrupted several potential touchdown catches and came away with three interceptions and a fumble.

After struggling in his first game, Darron Thomas made quicker passes but still struggled with making reads. “I put it on my shoulders,” said Coach Sauk “to be more vocal with Darron before I give him the play to tell him what to read because I know what’s going to be out there.”

“We gave up 40 points and we lost, so in the end it’s my side of the ball that needs to get fixed a little better, and we’ll work towards it,” said Coach Sauk.

The Thunder will have a bye this week to help try to work out the kinks before heading to Los Angeles for a tilt with the 1-1 KISS. That game will be broadcast via radio on 750 The Game.