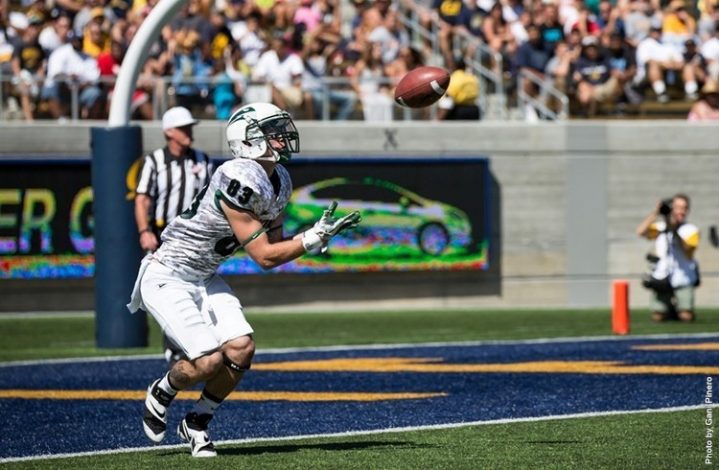 Halliday’s three TDs led to a 28-0 lead by halftime and PSU never got closer than 14 points after that.

For the game, Halliday had eye-popping numbers of 41-62 for 544 yards and six touchdowns. He also threw two interceptions. Halliday entered the game leading the nation in passing with 461.5 yards per game. In all, Washington State threw for 630 yards and had 706 yards of total offense.

Washington State picked up its first win (1-2), while the Vikings dropped to 1-2.

The Cougars put together a methodical 14-play, 80-yard scoring drive late in the first quarter. Gerard Wicks scored on a one-yard run as WSU ran seven times and passed seven times in the series.

Portland State’s first serious scoring threat came early in the second quarter. A big 30-yard reception by Kasey Closs on a third-and-21 play set the Vikings up at the WSU 10-yard line. But, Shaq Richard fumbled on the next play and the Cougars took over.

A big-hitting 67-yard pass highlighted WSU’s ensuing series. It took only six plays for the Cougars to go 93 yards as Halliday threw a 15-yard scoring strike to River Cracraft.

Washington State scored again quickly following a 44-yard punt return by Rickey Galvin. Halliday hit Dom Williams on a 17-yard scoring pass the very next play. After a strong first quarter of play, the Vikings suddenly trailed 21-0 with 11 minutes to go in the second.

Halliday tacked on a third TD pass – a three-yarder to Vince Mayle – late in the quarter and the Cougars led 28-0 at halftime.

Washington State had 357 yards by the half, with 321 on Halliday passes. In addition, the Cougars shut down PSU’s always productive running game, allowing only 20 yards on 16 carries.

Portland State opened the second half with an impressive drive that gave them some hope. An 85-yard series that included seven Kieran McDonagh passes and four Shaq Richard running plays resulted in a six-yard scoring run by Richard.

The Viking defense got its first three-and-out stop on the Cougars on their next series. That set up another long drive and score. This time McDonagh tossed a 24-yard scoring pass to Alex Toureen. At 28-14, the Vikings once again had the Cougars attention.

Halliday connected on two more touchdowns in the next two series. Both went to Isiah Myers; an eight-yarder and a four-yarder. That pushed WSU back to a 42-14 advantage early in the fourth quarter.

Safety Patrick Onwuasor picked off a Halliday pass in the fourth quarter, returning it 42 yards for a touchdown and completing the Viking scoring.

Washington State tacked on three touchdowns in the fourth quarter to round out the scoring.

Toureen had a career game, making seven receptions for 100 yards and a touchdown. Kasey Closs added eight catches for 81 yards. McDonagh finished the game with 269 yards passing on 31 of 51 with one interception.

PSU finished with only 93 yards on the ground, its fewest in a couple of seasons. Richard led the way with 11 carries for 68 yards and a touchdown.

Demetrius Jackson led the Viking defense with nine tackles. Onwuasor had seven tackles to go with his interception return for touchdown. Xavier Coleman made six tackles, had a sack and broke up three passes.

GAME NOTES: Darien Washington had his first career interception, picking off a Halliday pass in the second quarter… PSU is 0-14 all-time against Pac-12 teams, 0-2 against Washington State… Portland State has one more non-conference game, next Saturday at Cal Poly. Game time is 6:05 p.m. It will on Rip City Radio 620 AM with a live video stream at www.WatchBigSky.com.