November 10, 2016 by Mercy Strongheart No Comments 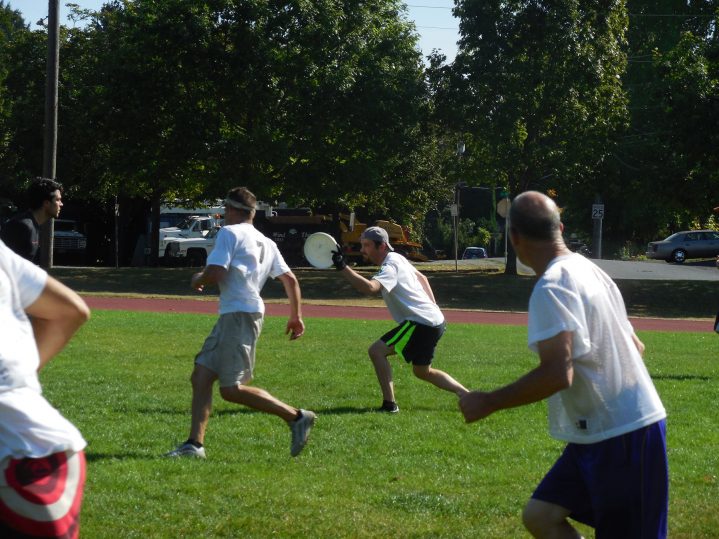 Although it’s been around for a long time, the sport of ultimate (sometimes called ultimate frisbee), is one of the fastest growing team sports in the country.

Portland’s ultimate scene ranges from professional to pick-up games, with leagues and clubs in the middle. There are brand new players who are still learning to throw a frisbee, and seasoned Stags who represent Portland in Major League Ultimate. Portlanders love it so much, there are pick up games happening everyday, all over the city.

[quote align=’right’]One thing that makes ultimate so fun is self-officiating, referred to as the “Spirit of the Game”. Players make their own calls and trust each other to be honest.[/quote]Roger Geller got into ultimate while in college. He saw a group throwing a frisbee around outside his dorm, asked if he could join, and ended up on their team. Three decades later he is still playing. While he has been on a team in Portland in the past, Geller sticks to pick up games these days. “Playing on a team is too much commitment for me right now,” says Geller. “Plus, I don’t like drills.”

Nate Semm is the Vice President of PUFF (Portland Ultimate Flying-disc Foundation), a nonprofit dedicated to growing ultimate in the greater Portland area. He plays on a Masters Men’s team, which he describes as an “older men’s frisbee team, for those of us who don’t want to chase 18-23 year olds around anymore”.

Semm says the Portland pick up scene is a place “where people get their feet wet”. He says people are there just to have fun and, for the most part, “nobody really cares about the outcome of the games”. I asked Semm why people should get out and play ultimate. “I grew up playing sports,” he said. “It’s easily one of the most fun, positive sports I’ve played. People really enjoy the smiles and the game.”

Geller agrees, calling it a good-natured and ethical sport. Geller plays pick-up games regularly, even in other cities while traveling for work. He says he likes that games happen year round and that you can get a game going with however many players show up. 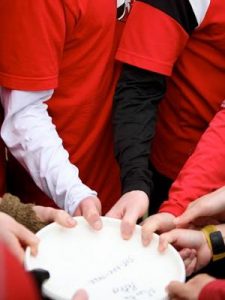 One of the things that makes ultimate so fun is that it is self-officiating. This is referred to as the “Spirit of the Game”. Players make their own calls and trust each other to be honest. In the words of USA Ultimate, the national governing body of the sport: “Spirit of the Game [is] a tradition of sportsmanship that places the responsibility for fair play on the players rather than referees”.

Semm says that the self-officiating nature is “one of the great things about this game”. He relates a story that happened with one of PUFF’s high school teams. The team was co-ed, and on the day of the game they were under their boy to girl ratio. The players were on the field, trying to work out how to proceed. Being self-officiating, there were no referees to tell them what to do. One of the parents came off the sidelines and started yelling at the league coordinator, upset that her child’s team was being held up from playing. The coordinator shot back at her, “Listen, these kids can work it out amongst themselves!”. Sure enough, the high school students determined what seemed fair to them that day, and proceeded.

If you find a pick up game to check out, Geller cautions to show up prepared to play, with good running shoes and clothes that can get dirty. About three years after moving to Portland, he was walking by Irving Park and saw an ultimate game underway. He was so excited that he jumped in and played with enthusiasm, even though he was wearing dress shoes and hadn’t played in three years. “I was crippled,” he laughs. “I couldn’t play the rest of the summer.”

To find an ultimate pick up game, or information about joining a league, visit PUFF’s website at portlandultimate.org. Semm says that posting on their facebook page is another good way to find a group to join. You might also try pickupultimate.com.