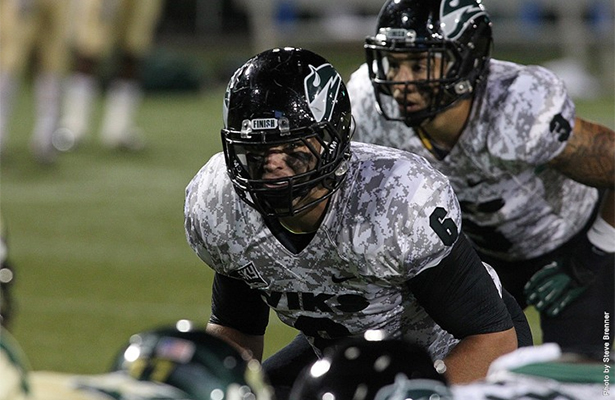 Involved in an unlikely defensive struggle, the Portland State Vikings were undone by five turnovers, losing to Southern Utah, 17-7, at Eccles Coliseum.

PSU held the Thunderbirds to 183 yards of offense but a pair of Viking turnovers led directly to both SUU touchdowns. Meanwhile, a Viking offense that has been a powerhouse all year, had its lowest output of the season, totaling 313 yards and only one score.

Neither team could move the ball in the first quarter and each team punted three times. PSU totaled only 59 yards of offense while Southern Utah gained 65.

T-Birds kicker Colton Cook finally broke the scoreless tie with a 44-yard field goal at the 13:08 mark of the second quarter. Then a Portland State fumble on the next possession set up the Thunderbirds at the PSU 18 for another score.

Southern Utah quarterback Aaron Cantu hit Fatu Moala on a 3rd-and-goal play from the 5-yard line for the first touchdown of the game. The extra point put SUU ahead 10-0 with 5:15 left in the half.

Just before halftime, Portland State got on the scoreboard, mounting a 13-play, 75-yard drive behind backup quarterback Paris Penn. With a fourth-and-goal at the one-yard line, Penn fought his way into the endzone. That closed the score to 10-7 at halftime.

The third quarter was just like the first. No offense and six punts between the two teams.

Then came the fatal turnover for Portland State. Quarterback Collin Ramirez was picked off at midfield by Tyree Mills who returned it to the Viking 1. It took three plays by the Thunderbirds, but Cantu finally punched the ball across the goal line with 6:01 remaining in the game.

Down 17-7, the Viking offense drove the ball 55 yards behind Ramirez, but were finally stopped on fourth down at the Southern Utah 20 with 3:12 to play. From there, the Thunderbirds were able to run out the clock.

Portland State used all three quarterbacks trying to find the right mix on offense. They combined to complete only 18-38 passes for 196 yards and three interceptions. The running game had 117 yards but needed 41 carries (2.9 ypc). PSU also lost two fumbles.

However, the Thunderbirds two touchdown drives were of 18 and 1 yards, and the field goal drive went just 12 yards after a 22-yard punt return.

Jaycob Shoemaker led the Viking defense with 11 tackles. Dean Faddis made 10 stops. David Edgerson had six tackles and an interception.

GAME NOTES: Wide receiver Kasey Closs was the offensive star for the Vikings, catching five passes for 57 yards… running back DJ Adams had 17 carries for 47 yards… the seven points scored by the Vikings were the fewest in a Big Sky game since losing 14-0 to Montana State on Oct. 7, 2006… PSU was playing in Cedar City for the first time since 1993 and for the first time in a Big Sky Conference game… Portland State will have a bye next Saturday. The Vikings return to conference play on Oct. 26 when they host the University of North Dakota. Kickoff is 1:05 p.m. at JELD-WEN Field.