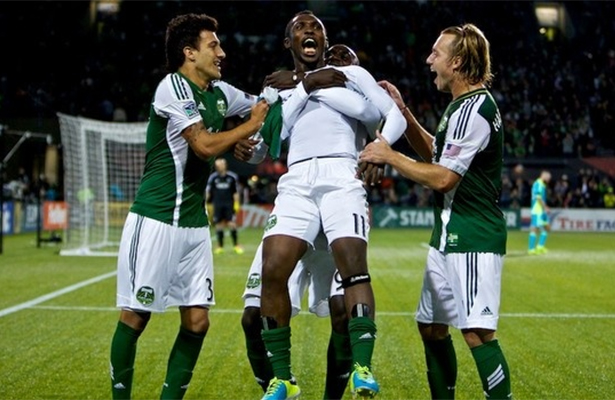 Long after the final whistle blew Sunday night at Jeld-Wen Field, a lone, scraggly strand of wrist-tape lingered, untouched, on the pitch.

Just 20 minutes earlier, it belonged to Clint Dempsey, the player that has come to define the fiercest football rivalry in North America.

But when the utterly classless and disgraceful Dempsey threw it on the ground after he was substituted, it signified the surrender of the Seattle Sounders, and the best night in the history of the Portland Timbers.

The Timbers Army got their message across early: $$$ can’t buy my love. And if there was a roof, it would have been blown off Jeld-Wen as the Army watched Seattle’s international stars flail and fail against a serenely composed Portland side that the occasion was not big enough to overtake.

The Sounders? A team that either would not, or could not maintain control.

This was a derby for the ages, one that neither side will ever forget. The skill, the intensity, the individual play, the dirty, ugly side of the game, the inescapable drama and heart-pounding pressure, it was a thick cloud surrounding Jeld-Wen.

Where do you even begin? A superbly economical and pointed tifo from the Timbers that made Seattle’s September tifo look aloof and out-of-touch by comparison?

Was it the first ten minutes of the game, when the Sounders hit the bar twice, once thanks to an outstanding save by the incomparable Donovan Ricketts? On a night when Seattle’s goalkeeping situation and goalkeeping reeked of nerves and panic, the Timbers had a wall.

Or does this tale really begin with the twinkle-toed 40 minutes of soccer the Timbers put together to end the first half, combining and sparkling and playing Seattle off the field and into searing frustration and exhaustion?

There’s enough meet in this story to start anywhere, but the performance of two Timbers players stood head and shoulders above the rest.

Darlington Nagbe will play in a World Cup. Jurgen Klinsmann better fly to immigration and get Darlington his citizenship, because I’m not sure the USA couldn’t use Portland’s #6 at this World Cup. I’ve seen a lot of soccer. And I’ve seen very few players who have the uncanny awareness and strength and sheer gravity to hold and run with the ball like Nagbe does.

He just feels soccer. It’s beautiful to watch. In the end, Seattle played Hack-A-Nagbe. It didn’t have any effect. The sky is the limit.

But we know how good Darlington can be. We didn’t know what Kalif Alhassan could do until tonight.

Kalif has had a checkered career in Portland; a difficult see-saw journey that saw him allegedly verbally abused by John Spencer and now sees him as the derby hero against the hated Sounders.

Yes, Kalif’s feet write poetry instead of play soccer, and his skill shone and grew and eventually won the game, but what won me over was his defending. Caleb Porter said after the game, “I don’t think he (Alhassan) even knew the word defend.” In the past, Kalif was an incomplete enigma of a player. Tonight, he entered a man’s game and came out a god.

It was a complete performance by Portland, who dominated the first half with aplomb. The experienced back-line, especially full-backs Michael Harrington and Jack Jewsbury, led by example with calm play. Jewsbury’s cross set up the goal and had Marcus Hahnemann scrambling. Jewsbury certainly didn’t play like a club captain ready to be put out to pasture. Diego Chara and Will Johnson again established their worth. There are no playoffs this year without those two.

Still, the Sounders showed up and played. Against Vancouver, they folded. This game was in a whole different ballpark. The Cascadia Cup was in the house and on the line for them. The wanted to silence Jeld-Wen so very badly, and they didn’t fold after they went down.

Yes, Seattle was unlucky. But they also gave their city and fans a bad name, and were nowhere near the better team.

The impending melee came in the 70th minute, as Jhon Kennedy Hurtado lugged down a flying Nagbe, and the ball raced free towards the corner as the whistle went.

Still, Will Johnson and Osvaldo Alonso charged after the ball. Johnson pulled up as he got to the ball and heard the whistle, just in time for Alonso to lunge at him with a dangerous two-footed sliding tackle.

As the Timbers’ justly incensed skipper went to confront the Alonso, the Sounder elbowed Johnson in the throat.

Will, to his credit, went down to his knees to make sure everyone saw the offense, but didn’t fall to the ground and try to win an Oscar.

Then it was a race to see who could get to the referee first. Michael Harrington, or the assistant referee who saw the elbow. Harrington won the race, and the Timbers were filled with a kind of desperate hatred not seen in this rivalry in MLS.

If there was any justice in the world, Alonso would be dismissed. The process of the linesman communicating with the referee was slowed down by Seattle, who like Mike Tyson against Evander Holyfield, lost every ounce of composure they possessed.

As the scrum broke out with the thick-headed Hurtado shoving Jewsbury to the ground, Pa Kah pulled Nagbe and Alhassan, the Timbers’ two prized players, out of harm’s way.

Sure enough, Alonso was finally dismissed. In the end, it was a very well refereed game.

From Seattle, It was a simply spectacular implosion. There wasn’t a single Sounder in Portland that didn’t lose respect and credibility. Dempsey and Adam Moffat charged after the referee. Alonso had to be restrained by teammates. He wouldn’t leave the field. He wanted a fight.

Mauro Rolales jumped off the bench and confronted the linesman, as did Sigi Schmid. Seattle was down a man.

Soon thereafter, Dempsey was hauled off. He had a hurting shoulder, a bad temper, and he’d been defeated. So the Captain of the United States of America, started walking off the field, and while he did, he stripped the tape from his wrist, threw it down on the field, and finished his walk off without a single glance back.

I’ve seen Landon Donovan humbled at Jeld-Wen. Never in a million years would he behave with such hostility and disrespect towards the game of soccer. I’m ashamed to have Dempsey as the captain of my country. I hope Klinsmann was watching, and I hope he strips Dempsey of the honor.

As for Ozzie Alonso, I hope he never pulls on the USA shirt.

Maxi Urruti, too, needs to be put in his place. Unless I’m mistaken and Urruti is seriously hurt, that was one of the worst displays of diving and gamesmanship I’ve ever seen. Urruti saw Frederic Piquionne ready to take his place in the field, and so nursing a 1-0 lead, Urruti was also apparently nursing an injury that suddenly caused him to fall down and be stretchered off. Merritt Paulson should have jumped out of suite, ran on to the field and told Urruti: We don’t do that in Portland.

The game wasn’t over. Even though Portland killed things off effectively, even though Diego Valeri, the team’s MVP candidate, was not needed, Seattle had one last attack.

It came in stoppage time. It came with a goal-mouth scramble, and the ball falling to Steve Zakuani (this is how I work, this is how play Zakuani), a man who played for Caleb Porter at Akron.

Zakuani had an open shot from eight yards out. Or so he thought. Because Pa Freaking Kah threw himself at the shot, and somehow deflected it onto the crossbar. It was scuffled back goal-wards, only to have Captain Jack on hand to clear the ball off the line.

The Cascadia Cup went to Vancouver. The Timbers went to the top of the league. With only two games left in the regular season, it’s time to dream. You must dream. Portland is going to win the league.

For Kah, the captain of Portland’s back-line, it was sweet redemption for the sins he committed in Seattle a little over a month earlier.

He shut down Dempsey. And Dempsey’s behavior let everyone know it. But Kah and Dempsey can have their battles. The best moment of the night was off the ball in the first half, after another one of those mazing, leaning, sweeping Nagbe runs.

Darlington, the Akron kid, the immigrant from Liberia who remains as humble and as organic and as respectful as a kid who understands how lucky he has been in life, had a moment alone with Dempsey, the Premier League star who might have just spit on the field as he walked off it later that night.

By Abe Asher | Courtesy of OregonSportsNews