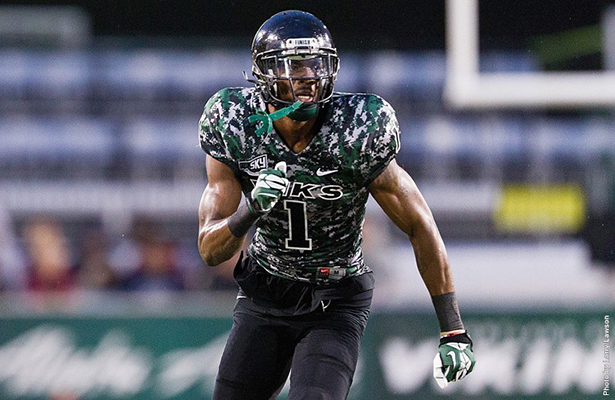 PSU travels to Cedar City, UT for the first time in 20 years to take on Southern Utah. This week’s game will be the first Big Sky game against the T-Birds in Cedar City.

The Vikings go into the game having lost two straight and will be looking for their first Big Sky win of the season. PSU is 3-3, 0-2 after a 55-27 loss at Montana last Saturday. Meanwhile, Southern Utah lost a home game to UC Davis, 21-3, and stands at 4-2, 1-1 this season.

This week’s game kicks off at 1:05 p.m. PT and will air on Freedom 970 AM and www.freedom970.com. The pre-game show begins at noon. A live video stream is available at www.WatchBigSky.com.

Portland State is reeling after two straight losses, though the two opponents were nationally-ranked Cal Poly and Montana. Meanwhile, the Thunderbirds had started the season well, but suffered a surprising home defeat to the Aggies last week. PSU beat UC Davis earlier this season, 41-10.

Southern Utah is a second-year member of the Big Sky Conference. Last year, the T-Birds pulled off a come-from-behind, 49-42 win in Portland. The Vikings outgained the Thunderbirds by nearly 200 yards, 587-397, leading 21-3 in the first quarter and 28-13 in the second quarter. But they committed four turnovers and had 14 penalties to hurt their cause. The T-Birds scored 17 points off Viking turnovers.

PSU and SUU were former combatants in the old NCAA II Western Football Conference from 1986-1992. The Vikings went 3-1 in Cedar City with the last game being a non-conference affair in 1993.

Southern Utah is a second-year member of the Big Sky Conference. The Thunderbirds went 5-6 last season, 4-4 in Big Sky games, including a win at Portland State. This year, SUU has started strong, winning four of its first five games before a surprising 21-3 home loss to UC Davis last Saturday.

The style of play for Southern Utah will be much different from what Portland State has experienced so far this season. The Thunderbirds have a strong defense and a run-oriented offense that has resulted in shorter, lower scoring games. The T-Birds opened the year with a 22-21 win over FBS member South Alabama. A loss at Washington State was the only blemish on the card until last week’s loss to UC Davis. The T-Birds have beaten Sacramento State (24-21) and Northern Colorado (27-21) in close contests. Three of Southern Utah’s four wins have come on the road.

Southern Utah allows only 346.7 yards and 22.0 points per game on defense, both of which rank third-best in the Big Sky. SUU’s run defense allows 114.8 yards per game, the lowest total in the Big Sky. The T-Birds have forced 13 turnovers while committing just eight.

Sophomore linebacker Zak Browning was the Newcomer of the Year in the Big Sky last season. He leads the Thunderbirds with 53 tackles this year. Browning was a high school teammate of the Vikings’ Brandon Brody-Heim at Camas, WA’s Union HS.

Sophomore defensive end James Cowser has been one of the top defenders in the league this season, making 38 tackles, 11 tackles for loss and four sacks. Linebacker Matt Holley has 7.5 tackles for loss.

Offensively, Aaron Cantu leads the way at quarterback. Cantu has completed 67% of his passes this season for 1,151 yards and seven touchdowns. He has also thrown seven interceptions. Southern Utah operates a short passing game that averages only 9.5 yards per reception.

Fatu Moala leads the receiving corps with 34 catches for 393 yards. Slot receiver Griff McNabb has 23 receptions for 233 yards and a touchdown.

Kicker Colton Cook is second in the Big Sky in field goals, having converted eight of 11 field goals with a long of 48 yards.