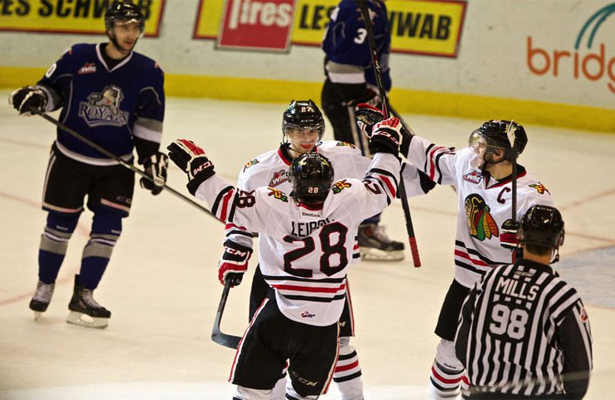 The Portland Winterhawks have gone into the playoffs with high expectations and questions about if they can repeat like they did last season when they went all the way to the Memorial Cup Final.

In the six games they have played in the post-season, the Hawks have answered with a resounding yes.

Victoria was to be a big challenge; the Winterhawks had only beaten them once all season and all signs pointed to an intensely defensive battle. The first two games have been played in Veterans Memorial Coliseum and the Moda Center, and the results are polar opposite to the regular season. The Royals have found themselves in a 2-0 deficit after being manhandled by an extremely hungry Portland team.

Game one at the glass palace aka Veterans Memorial Coliseum on Friday was a physical affair, with Victoria going to the penalty box on numerous occasions after failing to control the Winterhawks high speed. Two goals in the first period and one early in the second chased Patrik Polivka from the Royals net and he was replaced by Coleman Vollrath. The Royals responded seconds later with a goal, but then three straight by the Hawks including two by Oliver Bjorkstrand, put the game out of reach. The Royals scored one more before the end of the second, but the Hawks pocketed two midway through the third to take the final score to 8-2. The game became a bit of a mess at that point with 147 total penalty minutes including a line brawl which led to Portland’s eighth goal. Victoria lost more than just their game and composure, they also lost Keegan Kanzig for at least one game on a suspension for a vicious slash that touched off the line brawl.

The Hawks 8-2 win was the largest margin of victory since 1998 when they beat Spokane 9-2. The eight goal total was also the total number of goals that the Hawks had scored in the four games they played against Victoria during the regular season. Nic Petan had a 4 point night, while Taylor Leier, Brendan Leipsic, Mathew Dumba and Oliver Bjorkstrand all had three points. Portland went 3 for 10 on the power play while Victoria was 1 for 6. Portland outshot Victoria 35-27.

The next night, the series shifted to the Moda Center and a sellout crowd with the Royals without Kanzig looking to even the series and more importantly, stay out of the penalty box. The Royals opened the scoring with the first of two goals by Steven Hodges early in the first period on the power play. The Winterhawks seemed to take this as a sign of aggression and they battled back with two goals in 15 seconds by Nic Petan and Anton Cederholm. Victoria came back at the end of the period with a power play goal by Austin Carroll to tie the score at two.

The second period saw Hodges second goal to allow Victoria take its second lead partway through the period. Again the Hawks took little time to tie and re-establish the lead as Derrick Pouliot scored on the power play and just 1:37 later, Oliver Bjorkstrand would net his first of two in the game also on the power play. The Winterhawks sealed the game early in the third period on Bjorkstrand’s second goal of the game and capped it off with Derrick Pouliot’s second of the night in the closing minutes of the period. Portland went 2 for 5 on the power play, Victoria 2 for 4, Patrika Polivka who was yanked early in the second period of game one, played the entire with 38 saves on 44 shots, Brendan Burke turned aside 22 of 25 for the win.

The series now shifts to Victoria, BC for games 3 and 4 on Monday and Tuesday and unless Victoria can solve the Hawks incredible hybrid team, they will go out in four straight. Game 3 will be available online or through eight viewing parties around the Portland metro area while Game 4, in addition to the viewing parties, will be shown on Comcast SportsNet Northwest. To date, the Hawks have won their last 34 of 35 games and since the loss March 1st, have a 20 game unbeaten streak going as well.

Other series have completed two games as well. Currently, the Kelowna Rockets have a 2-0 series lead over the Seattle Thunderbirds after two six goal games, the Edmonton Oil Kings hold a 2-0 series lead over the Brandon Wheat Kings with 2 successive shutouts and the Kootenay Ice / Medicine Hat series is tied at one. Kootenay won the first 4-2 and lost the second night 5-2. In neither of those games did the scorers from Kootenay earn any points.

Ice Chips: The Memorial Cup dates are set for London, Ontario starting Friday, May 16 through May 25 and the Quebec Ramparts from the QMJHL have been awarded the 2015 cup host duties. The next WHL host will be in 2016. At the next Portland Winterhawks home game, the Booster Club will make a check presentation to the WAHA Education Fund.