April 9, 2014 by Edward Kilgarriff No Comments 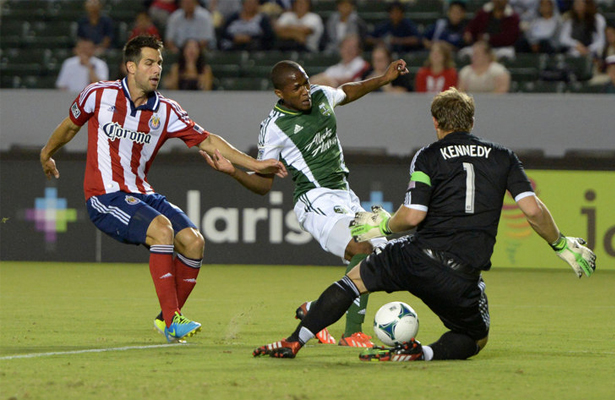 After a turbulent offseason for the LA club, a strong preseason offered new hope for the red & whites.

The MLS announced that it had purchased the club from it’s Mexican owners and were looking for a buyer as well as a new stadium for the team.

With awful attendance, and an even worse league record, something drastic had to be done about Chivas USA.

Unfortunately, a 1-2-2 record so far this season offers little hope that things will improve in 2014.

New head coach Wilmer Cabrera, hasn’t done anything spectacular since he arrived. However, former Seattle Sounder Mauro Rosales has been in great form. He can create & finish, and seems to be reveling in the grass playing surface of the Home Depot center.

The formers Timbers defender Andrew Jean-Baptiste is getting minutes done in LA now. Left surplus to requirements by Pa Modou Kah, in 2013, Jean-Baptise has been relatively solid at the back along side former mens national team player Carlos Bocanegra.

Added to that, Dan Kennedy is still one of the best shot stoppers in the MLS, it’s a wonder that Chivas concede so often.

The key to this weakness is in the mid-field. Predominantly attacking midfielders who don’t always track back, often leaves this back line exposed. It’s been the same issue at Chivas for years now, and no one has done anything about it. The old addage, stop the goals going into your own net first… then worry about getting some at the other end of the pitch.

To do that Chivas will need to keep possesion a bit more than they have this season. With exception to their first home game of the season, they’ve averaged just 40% of the game time on the ball. That’s just awful. You won’t win anything without the ball.

Surprisingly, they have scored in four of their five games this season. Erick “Cubo” Torres has an impressive 4 goals to his name.

Former Mexican National time striker Adolfo Bautista, isn’t getting much game time. Seems like he was brought in to drum up support based on his name, but isn’t really the game changer that Chivas so badly need.

English man Luke Moore, and American Thomas McNamara have been switching as strike partner for Cubo, but neither has produced much of note.

This is a team in flux, low on self-belief. Their coach openly questioned his team’s heart after their 3-0 loss to rivals LA Galaxy.

If the Timbers have any hopes of getting back on the horse, the game couldn’t come at a better time. Watch for Chivas to try and hit the Timbers early, and then bunker for the rest of the game. And that’s this weekends enemy!

In other related news, Sacarmento Republic FC beat the Chivas reserves last weekend. In goal for Sacramento was none other than former Timbers keeper Jake Gleeson.