The Portland Marathon: A Sneak Peek at Portland’s Most Popular Race 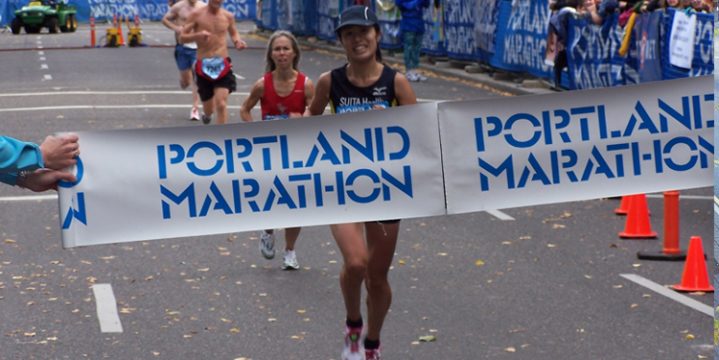 The much lauded, eagerly awaited annual Portland Marathon is coming up this weekend, and it promises to be one of the city’s top recreational sporting events of 2014. The festivities are scheduled to begin this Sunday, Oct. 5 at 7 a.m. in downtown Portland, with thousands of local, national and international participants signed up and ready to race.

The Portland Marathon is in its 42nd year, with the first competition taking place in 1972. Most marathoners—about 7,000 of the estimated 10,000 participants—commit to the full 26.2-mile course, with the remainder opting for the half-marathon race. Nearly three-fourths of racers are from out of town, with marathon participants representing all 50 states along with 29 other countries throughout the world. Registration for this year is closed, though 2015’s race, set for Oct. 4 of next year, is already open for early—and discounted—sign up.

The Portland Marathon draws fierce competitors and is considered one of the top 10 road race events in the U.S. It has also been deemed the best-organized marathon in North America, the best people’s marathon in the West, one of the top three best marathons for novice racers and the best race in October by various running publications. The marathon is U.S.A. Track & Field and Association of International Marathons sanctioned and certified. It is also an official qualification event for the Boston Marathon.

This epic annual event isn’t just for avid runners, however; everyone—from the disabled to dedicated walkers—is urged to participate. The course is wheelchair-friendly, with only 21 turns and no obstacles except for railroad tracks. The marathon was first opened to walkers more than 20 years ago and is considered ideal for slower-paced participants because it remains open for a full eight hours. More than 4,500 volunteers are available along the route to assist participants for the duration of the event. Due to these factors, Runner’s World deemed the Portland Marathon the most walker-friendly marathon in the U.S.

Families have an opportunity to join in the festivities as well, with two kid-friendly events scheduled for the weekend. The Kid’s Fun Run & Fitness Festival is slated to take place Saturday from 9 a.m.–noon at Jefferson High School and is geared toward children ages two to 12. Registration ($19.50 for one child and one guardian) is still open for this event, which includes races for several age ranges along with complimentary entertainment, snacks and activities. There is also an untimed family-friendly 10-kilometer course open for registered participants from 8–10 a.m. Sunday in North Portland.

The Portland Marathon course begins in inner downtown Portland. From the starting line at Southwest Fourth Avenue and Taylor Street, participants follow the river before heading through Northwest Portland and up St. Helen’s Road to the St. Johns Bridge. After crossing into North Portland, racers follow scenic North Willamette Boulevard to Greeley Avenue, eventually making their way across the Broadway Bridge and back to the finish line downtown on Southwest Third Avenue. Anyone trying to navigate through inner Southwest, Northwest or North Portland between 6:30 a.m. and 3 p.m. should check traffic closures in the area.

Each year, the Portland Marathon draws thousands of spectators lining sections of the course throughout the city. Viewers cheer on the racers while enjoying the wide range of entertainment along the course. This event boasts the most entertainment of any marathon in North America, with 85 groups scheduled to perform on Sunday. Organizers offer recommended areas for spectators in several sections along the route. Each year, Fit Right in Northwest Portland hosts a viewing party featuring local food, drinks, music and games for attendees. This year’s party begins at 7:45 a.m.

Whether you’re set to hit the pavement running or cheer on racers from the sidelines, the 2014 Portland Marathon is an event you definitely shouldn’t miss. No matter how you choose to enjoy the festivities, get ready, get set and go enjoy the beautiful weather (with forecasted temperatures soaring more than 20 degrees above the recorded means for early October) and Portland’s great urban outdoors this weekend.

Winterhawks Woes in the Third Period

Get Up! Get Active! 3 Events and Activities for the First Weekend of October