November 1, 2014 by Graham Kendrick No Comments 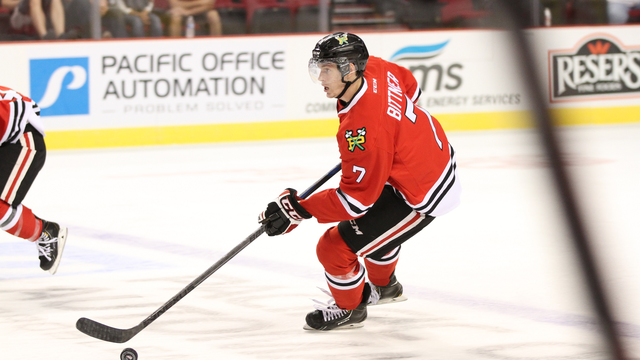 Paul Bittner scored the winning goal in overtime as the Portland Winterhawks knocked off the Kelowna Rockets 3-2 Saturday at the Moda Center in front of 8,099 fans.

The Hawks struck first 5:35 into the game while shorthanded when Oliver Bjorkstrand stripped a Rockets player of the puck at the center line, carried it into the offensive zone and snapped a shot past Kelowna netminder Jackson Whistle. Kelowna evened it at the 17:56 mark on a goal by Rourke Chartier to make it 1-1 going into the second.

After a scoreless second period, Hawks forward Ethan Price scored his first of the season at the 11:35 mark of the third when he went hard to the net and banged a rebound past Whistle to give Portland a 2-1 lead. Kelowna tied it 1:24 later when Devante Stephens scored to even the score at 2-2, forcing overtime.

In the extra frame, Nic Petan fed a pass to Bittner in front of the net, and after his first shot was stopped he stayed with it and banged in the rebound to give the Hawks a 3-2 win.

Michael Bullion won his first career game in net for the Hawks, turning away 31 of the 33 shots he faced to pick up the victory, and give Kelowna their second loss of the season. Whistle allowed three goals on 39 Portland shots in net for the Rockets.

The Hawks (6-10-0-2) are back in action tomorrow when they host the Edmonton Oil Kings at Veterans Memorial Coliseum at 5 p.m. in a rematch of the last three WHL championship series.