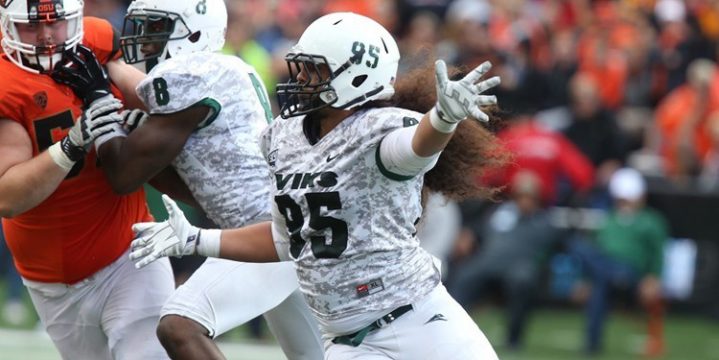 Portland State handled Idaho State’s dynamic offense as well as any team has in the past two months, but the Bengals still came away with a 31-13 win at Providence Park.

The 31 points scored by Idaho State were their fewest in seven games. And PSU held the Bengals to 430 yards – well below their 580-yard average. But the Vikings couldn’t answer on offense.

PSU committed six turnovers, two on interceptions in the endzone, and had 13 penalties as a team in the loss.

Portland State’s defense opened the game with a pair of stops on ISU’s high-powered offense. But on the Bengals’ third series, quarterback Justin Arias led his team to a touchdown, hitting KW Williams on a six-yard scoring pass.

The Bengals led 14-0 at the end of the first quarter, running 25 plays for 179 yards. PSU buckled down in the second quarter, holding the Bengals to only 74 yards and a field goal.

The Vikings finally got on the board at the 9:40 mark of the second quarter. Kieran McDonagh hit Darnell Adams on a 28-yard pass, then a moment later Kasey Closs scrambled in for a score on a 16-yard toss from McDonagh.

A 48-yard field goal by Jonathan Gonzales with eight seconds left in the half got the Vikings within 17-10.

The Vikings got the football to start the second half, but a McDonagh interception shut down their chance to tie the game. McDonagh threw another pick later in the quarter that the Bengals converted into a long scoring drive and a 24-10 lead.

Gonzales kicked a 33-yard field goal on the second play of the fourth quarter closing the deficit to 24-13.

The Bengals tacked on another touchdown in the fourth after intercepting McDonagh to complete the 31-13 final.

Arias paced his team, completing 28 of 48 passes for 319 yards and two touchdowns. Xavier Finney led the ground game with 23 carries for 88 yards and two scores.

For the Vikings, Closs had his best game of the season with nine receptions for 139 yards and a touchdown. McDonagh struggled though, throwing four picks and losing a fumble. He completed 21 of 37 passes for 236 yards.

Shaquille Richard rushed for 52 yards on 10 carries and caught four passes for 38 yards.

Erik Collins had two of Idaho State’s five interceptions. The Bengals have forced 22 turnovers in nine games this year.

Savali Talalemotu was the top Viking defender with eight tackles, 2.5 sacks and a forced fumble. Jeremy Lutali and Corey Crowder also had eight tackles each.

GAME NOTES: Idaho State’s win ended a four-game losing streak to Portland State. It was the first time since 1998 that the Bengals have won in Portland… Jonathan Gonzales was 2-2 on field goals and is now 12-14 in his last five games. Gonzales leads the Big Sky with 13 field goals made… Portland State goes on the road the next two Saturdays. The Vikings travel to Montana State next week for a 1:05 p.m. PT game. It will air on Rip City Radio 620 AM, ripcityradio.com and WatchBigSky.com.