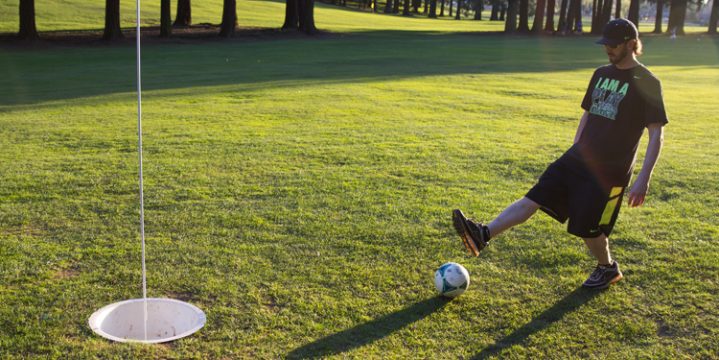 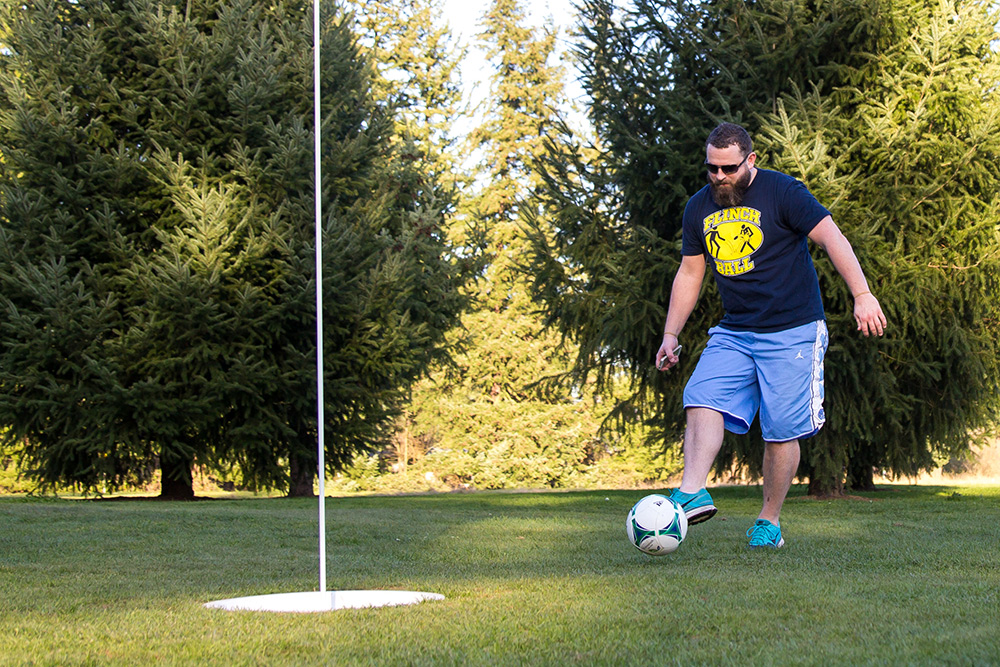 Golf isn’t exactly the most exciting sport. Nor is it one of the cheapest. But swap out the clubs for a decent pair of tennis shoes, trade the small balls for a larger version, and you’ve got the makings of an affordable alternative.

Portland loves the words “affordable” and “alternative,” so it was only a matter of time before this new sport exploded around here. And explode it has.

FootGolf is what they call it.

A mashup of soccer and golf, played on a regular golf course with normal soccer balls. Beers in hand, if you prefer, as you stroll the course just kicking your soccer ball toward a 2-foot hole in the ground.

The same rules of golf apply, but you’re kicking instead of swinging.

Glendoveer Golf Course on NE Glisan was the first local facility to add the new sport onto their course. It opened last May and local soccer players have shown up in droves.

On Saturday, a few buddies joined me as we dove headfirst into the growing sport. With the temperature creeping toward 70, we expected a full house. What’s more, since FootGolf shares the same course as regular golfers, it seemed we’d be chasing soccer balls through other guys’ short games. 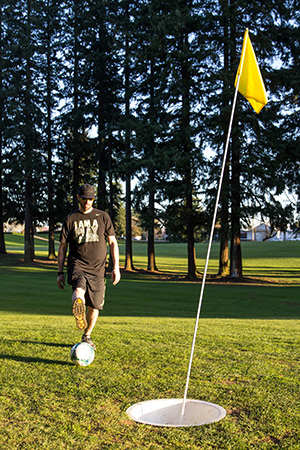 Thankfully, that wasn’t the case.

According to Evan Lundgren, director of the sport at Glendoveer, they regularly close the front nine of their west course during FootGolf hours, which until April 1 is limited to Saturdays after 12 p.m.

Still, we expected golfer and FootGolfer pandemonium. But that was never an issue.

“For the most part there haven’t really been any major problems between the two groups,” says Lundgren. “Like everything, the complaints came from those who were predominantly ignorant of what the sport was, what it brought to the table, and who it was that actually played FootGolf. Once this ignorance was overcome and golfers started to see young, vibrant groups come out dressed up in FootGolf regalia, their negative opinion was certainly softened if not changed altogether.”

As we approached the first hole, it took a few minutes to get a lay of the land. The course staffer pointed us in the direction of the flag and we each took turns booting our balls. Luckily, our cumbersome kicks were aided by the slope of the hill, and each ball rolled in the general direction of the pin.

After that, it was every man for himself.

We spread out and took turns kicking our soccer ball toward the flag. One of us finished the hole just one over par while the other two finished at plus-six. Once finished, it took another few minutes to realize we were headed toward No. 3 before deciphering the map to find Hole 2.

At first, we must have been the worst on the fairway. But a few holes into it and we were noticeably better. Immediately we were addicted. By the fourth hole we were planning our next trip (this weekend, actually) and by the time we reached halfway we’d already snapped selfies and texted our buddies.

FootGolf is officially the most fun you can have on a golf course. And we’re not alone.

Lundgren says the Portland community has been incredibly supportive. Local teams and companies have hosted tournaments while continually planning more events related to the sport.

[quote align=’right’]FootGolf is officially the most fun you can have on a golf course. And we’re not alone.[/quote]“We’ve also had a loyal group of regulars who have been incredibly supportive and influential in spreading the word,” Lundgren says. “They’re really keeping FootGolf a viable, legitimate sport.”

Even building the course wasn’t as difficult as I had imagined: It only took a few weeks.

After the general manager mocked up a hole-by-hole breakdown of yardage and setups, some staffers played the proposed course to get a feel for the layout and slight adjustments were made.

“The main issues with installing the course were not installation-based,” Lundgren says. “The conflict really came from the course regulars who were aghast at their beloved course being turned into a soccer field, park, playground, or joke, as they put it.”

Lundgren says they expected a similar reaction, so they weren’t entirely shocked.

Nevertheless, FootGolf seems to be booming in Portland. There are already two other courses in the area – one in Clackamas and Lake Oswego – as well as courses in Lebanon and Bend.

Glendoveer is currently open for FootGolf on Saturdays after 12 p.m. You can reserve an 18-hole tee time on their website for just $15 and rent a soccer ball for just $5, too.

Lundgren recommends new players at least do some research on golf before launching into the sport.

“Asking a friend to describe what happens on a golf course or even following a friend around while they played 9 holes would be incredibly beneficial,” he says. “Other than that, they should just be worried about having fun.”

You don’t even have to worry about having fun. That part will come nautral — it’s literally the most fun you can have in Portland on a Saturday.

Here are some photos of our initial jaunt into the glorious world of FootGolf: 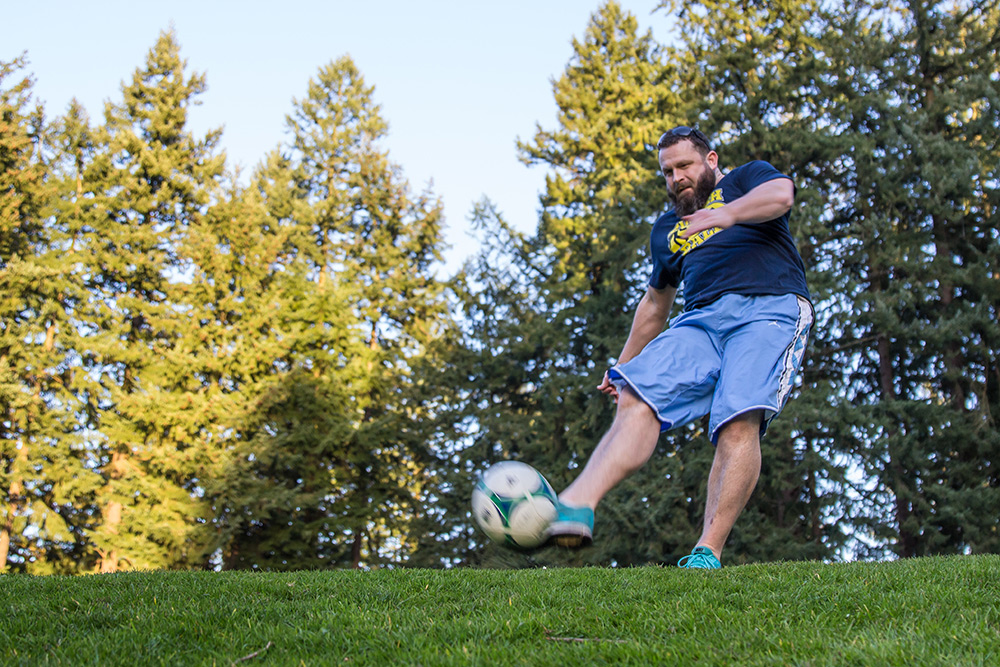 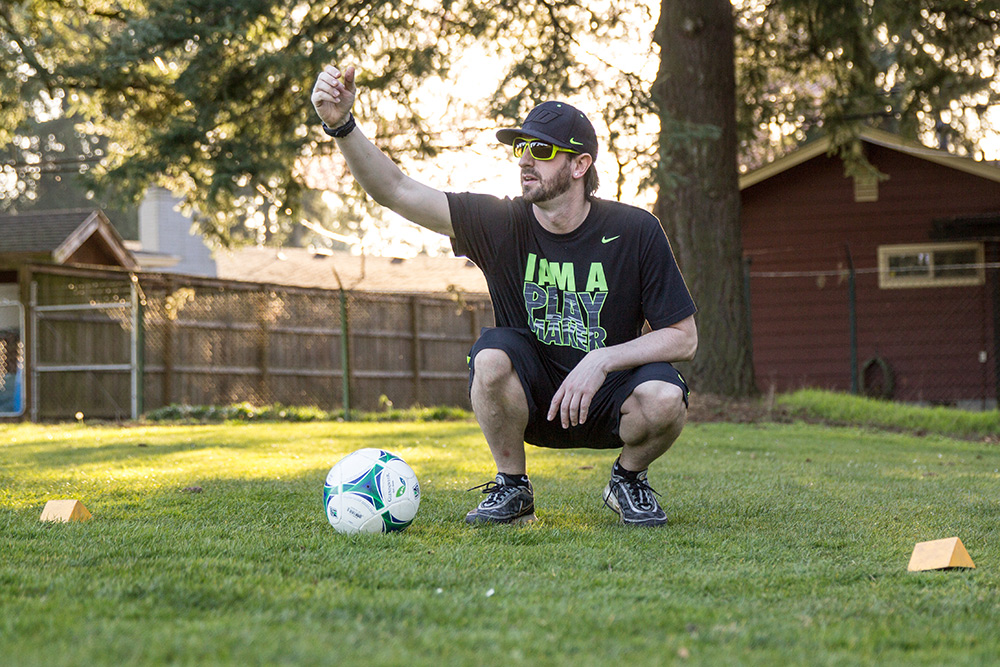 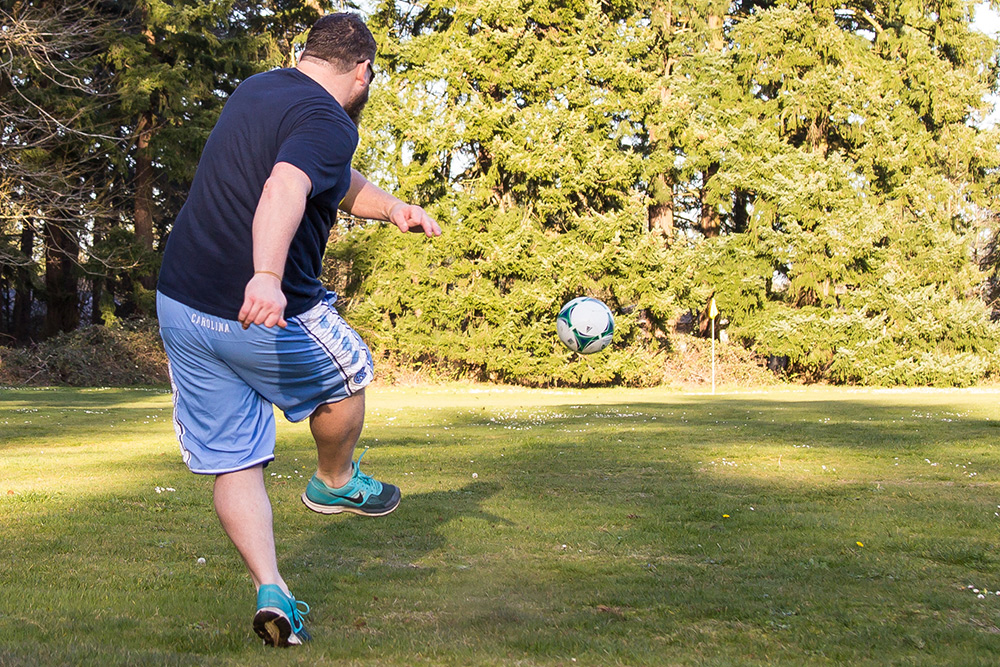 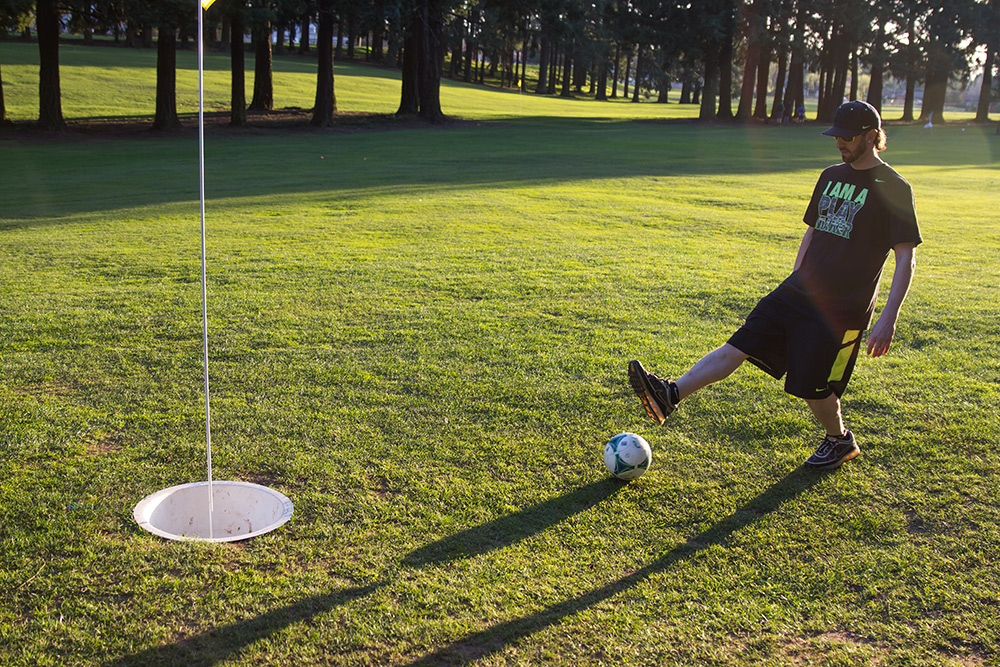