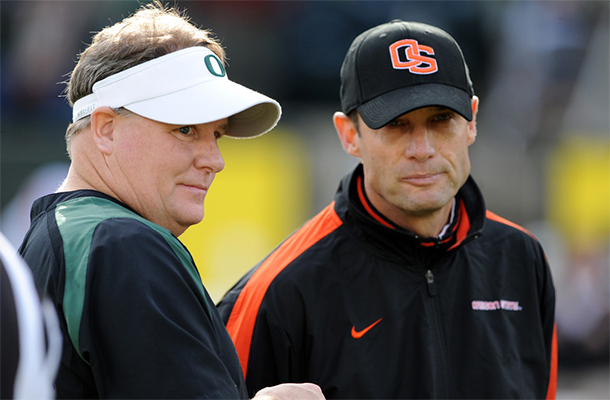 On September 3rd, 2011, Mike Riley’s Beavers had arguably one of their most embarrassing losses in school history, losing to FCS school Sacramento State. Sacramento State wasn’t even competitive in their own division, but somehow still found a way to beat the Oregon State. This loss started the incredible downhill spiral for the Beavers. The offense looked lethargic, the defense looked helpless, and the Beavers just couldn’t overcome the massive amount of injuries they suffered in 2011. Mike Riley’s seat could not be any hotter and Beaver fans were demanding that he be fired. And then the 2012 season came.

Oregon State had very low expectations coming into the 2012 season. Experts predicted them to take last in the Pac-12 South. But the Beavers started off their season with a huge victory over 2011 Big Ten champion Wisconsin. Then, they turned around and went on the road to beat quality UCLA and Arizona teams. As the Beavers went into their eighth game against Washington, they found themselves undefeated and ranked 7th in the country. If it wasn’t for a crucial injury to quarterback Sean Mannion, and nail-biting road losses to Washington and Stanford, it might have been a different season. Oregon State still finished with a 9-win season and Beaver fans were praising Riley.

Now at the beginning of the 2013 season, the Beavers suffered their second embarrassing loss in three seasons at the hands of FCS school Eastern Washington. Oregon State came into the season with fairly high expectations, but they came crashing down against the Eagles. Now the Beaver haters are back calling for Mike Riley’s head, but they fail to realize that despite the loss, Mike Riley is one of the best coaches in not only the conference, but the country as well.

Mike Riley came to Oregon State in 1997, taking over one of the worst programs in the entire country. His first season they only went 3-8 but in his second season, he stated a major turnaround with a 5-6 record and an incredible upset victory over a very talented Oregon squad. 5-6 may not sound like a great record by today’s standards for Oregon State, but considering that they hadn’t won five or more games since 1971, it was considered monumental. The NFL had taken notice of Riley’s success as well and the San Diego Chargers inked him to a deal in January of 1999.

Even though Dennis Erickson came in 1999 and had tremendous success, including an 11-win season and Fiesta Bowl victory over Notre Dame, it was clear to people that Riley had laid the foundation for the program’s success (almost all of the players off the Fiesta Bowl team were Riley recruits). Erickson left for the NFL in 2003 and the timing couldn’t have been more perfect for Oregon State as Riley was fired at San Diego in 2001. The Beavers re-signed Riley to a seven year deal and he continued the success he created at Oregon State. He led them to consecutive bowl wins for the first time in school history in his first two years back. Even though the Beavers had a down year in 2005, they bounced back with three straight bowl wins in 2006-2008. Riley has also had his share of monumental victories at Oregon State. They beat the #2 Cal Bears on the road in 2007 and upset the #1 USC Trojans in 2008. Oregon State was one game away in 2008 and 2009 from winning the conference title but fell short in the Civil War against Oregon both years. Riley did, however, win Pac-10 Coach of the Year in 2008.

So why do so many people want to have him removed? Is he just too nice? Is he not fiery enough? Is it because he isn’t keeping up with Oregon’s success? Despite many Beaver fans negative feelings towards Mike Riley, he is still one of the most respected coaches in the country and he should not be fired.

The first thing I would say to Beaver fans is don’t underestimate the value and quality of a players’ coach. Riley is not a yeller and a screamer; he is very calm and poised, and his players seem to like that about him. When he was an offensive coordinator at USC, former Trojan quarterback, Rob Johnson said about Riley; “He’s a player’s coach, who gets the most out of you by treating you like normal.” Johnson went on to be a fourth round NFL draft pick under Riley’s tutelage.

When you watch Notre Dame play on television, it seems like at least once a game, head coach Brian Kelly pulls his players aside and gives them a profanity laced tongue-lashing whenever they make a mistake. However, when someone like Beavers quarterback Cody Vaz has a crucial fumble against Stanford, Riley will calmly pull him, aside give him instructions and then give him a pat on the behind. When college football players have a coach they respect tremendously, it is much more likely that they will be willing to practice what he preaches. Riley’s incredible integrity is one of the reasons Beavers football is where it is today.

Another thing you have to consider while evaluating Mike Riley is that he had a lot of success, even though he hasn’t had a lot to work with. Oregon State is ranked towards the very bottom in the conference in recruiting and athletic facilities, not to mention that Riley is also one of the most underpaid coaches in the nation. But that hasn’t stopped Riley from making Oregon State a good program. He is Oregon State’s all-time winningest coach and his five bowl wins and seven bowl appearances are also the most in Oregon State history. In 2006 he led the Beavers to their second 10-win season in school history and through 2006-2008, he led them to 28 victories, the most in a three year span in school history. Even though Oregon State doesn’t have the advantages and luxuries that Oregon has, Riley still finds a way to have success.

Riley is one of the best in the country in developing talent. Some places like Alabama don’t have to develop talent because they have the most four and five star recruits in the country and those players just look at Alabama as a fast track to the NFL. Riley, doesn’t have that luxury, but he has still proven that he has a great ability to get players to the league, even with mostly two and three star athletes. Guys like defensive beasts Nick Barnett and Brandon Browner, offensive weapons Jacquizz Rodgers and Markus Wheaton, and skilled Pro Bowlers in Steven Jackson and Derek Anderson. All in all, Riley has 19 former Beavers players in the NFL right now and for a university that is not known for getting blue chip recruits, I would say that is not too shabby.

From about 1970-1990 both Oregon and Oregon State were the doormats of college football. But in the early to mid-90’s, the programs started to turn around thanks to Riley and former Oregon head coach Rich Brooks. In fact, from 1997-2008, the Ducks and Beavers had the same amount of wins against each other. Riley was competing for Pac-10 championships and more importantly, competing with the Ducks. But in 2009, the tide took a significant turn when Chip Kelly took the reins of the Oregon program.

Kelly was the offensive coordinator for two years before he took the head coaching job. With his master-minded offense, up-tempo pace, and “Win The Day” philosophies, the Ducks became the envy of the entire nation. Their offense put up staggering numbers that college football had never seen before and it led to incredible success for the Ducks. Kelly went 46-7 in his four years at Oregon and led them to three conference titles and four BCS games before heading to the NFL in 2013. The Ducks remarkable success led to generous and wealthy alumnus Phil Knight (founder of Nike) to donate even more money to the football program. The Ducks now not only had the sickest jerseys, they had arguably the best football facilities in the country.

The success of the Ducks is hard to swallow for Beavers fans. The rivalry that is one of the best in the country has been very one-sided as of late and many Beavers fans’ solution to that problem is to fire the coach. What they fail to realize is that there aren’t any coaches without a job right now that are more quality then Mike Riley. Unless Nick Saban or Urban Meyer expresses interest in the Oregon State job, Mike Riley is clearly their best bet.

Beavers fans have to realize that Oregon State isn’t the program that will be a national powerhouse, as hard as that is for people to hear. They don’t have the advantages that many programs like Oregon do, and fans rarely ever fill the 45,000 seat Reser Stadium. Oregon State is a respectable program that should expect to play in a bowl game basically every year and occasionally contend for a conference championship or BCS bowl game and they should not expect anything more than that. Schools like Washington State and Colorado wish that they could be like Oregon State. There might be a time where the Beavers experience a miraculous run like the Ducks have had over the past four years, but until that time Beavers fans should embrace Mike Riley and be thankful for what he has done for the program.