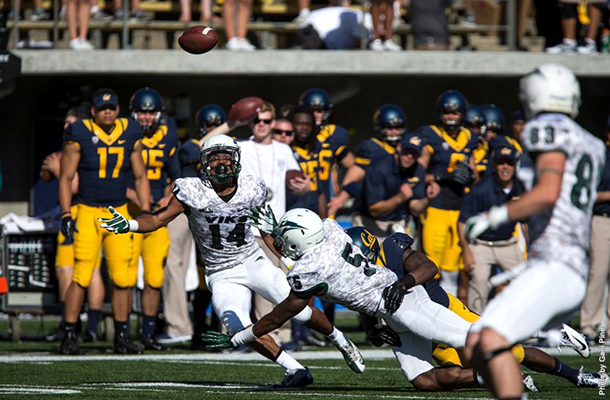 After posing a serious threat at a Pac-12 opponent and coming up just short last Saturday, the Portland State Vikings will have to seek win No. 2 at home this weekend.

PSU hosts Humboldt State in a non-conference game this Saturday at JELD-WEN Field.

The Vikings (1-1) and Lumberjacks (0-1) will meet in a 1:05 p.m. game. The game is not televised, but is available via live video stream at www.WatchBigSky.com. It airs on the radio at Freedom 970 AM and www.freedom970.com, with a pre-game show at noon. Live stats can be found at vikslive.statb.us or viksmobile.com.

Portland State threw an explosive offense at California last week and led for half of the game before losing 37-30. It was the closest a Viking team has ever come to beating a Pac-12 team. Still, PSU rolled up 553 yards of offense in the game and after two games this season leads the nation in total offense (612.5 per game). It has been a balanced attacked as well with the Vikings averaging 325.0 yards on the ground and 287.5 through the air. PSU has been a big-play attack and also leads the nation in yards per reception (24.0).

Humboldt State comes into the contest at 0-1, having lost a season-opener to Simon Fraser at home, 41-27. PSU and HSU meet for the first time in 26 years.

It’s still a small sample size but facts are facts, and the fact is the Portland State Vikings’ offense leads the nation in productivity. After two games against NAIA Eastern Oregon and Pac-12 California, Portland State is averaging 612.5 yards per game to lead all teams at the NCAA I Football Championship Subdivision level.

Sophomore quarterback Kieran McDonagh has been named the Big Sky Conference Offensive Player of the Week for his performance in a 37-30 loss to the University of California last Saturday. McDonagh had 368 yards of total offense and was responsible for two touchdowns in the game. McDonagh completed 13 of 28 passes for a career-high 308 yards, including an 81-yard touchdown pass to Kasey Closs to open the scoring. The 6-2, 245-pound QB from Vancouver’s Skyview High School also rushed 11 times for 60 yards and another touchdown.

McDonagh led the Viking offense to a 553-yard day against a Pac-12 foe. The Vikings now lead the NCAA I FCS level with 612.5 yards of total offense per game after two weeks. McDonagh’s 23.9 yard per completion average also leads the nation. He is tenth in passing efficiency (174.5) having completed 20-39 passes for 478 yards, three touchdowns and one interception this season.

Senior running back DJ Adams has been excellent through two games with 246 rushing yards and five touchdowns. He ranks seventh in the nation in rushing, third in scoring. Among Big Sky runners, the 5-10, 210-pound Adams is second in rushing and first in scoring.

SR RB DJ Adams is the Vikings’ touchdown maker. Adams has five endzone trips on the season, and 17 total in his PSU career on 203 carries. Counting his two seasons at Maryland, Adams has 32 career rushing touchdowns on 310 carries. That is a remarkable TD trip for every 9.7 totes.

ON THE RADIO: All Portland State football games can be heard on Freedom 970 AM and www.freedom970.com. The Viking Pre-game Show begins one hour prior to kickoff each week… Tom Hewitt (play-by-play) and Mike Lund (analyst) call the action.

ON THE INTERNET: Live streaming video of all Portland State home and Big Sky Conference games can be seen free at www.WatchBigSky.com… Live stats for Portland State home games are at www.GoViks.com with a mobile phone feature for in-stadium and on-the-go viewing: http://viksmobile.com.