March 26, 2014 by Edward Kilgarriff No Comments 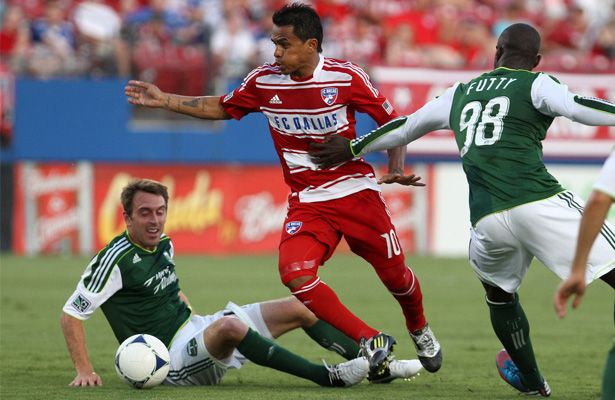 This weekend, the Portland Timbers travel to Texas to play FC Dallas.

Surprisingly, the Texans nearly started the season without a head coach, before Oscar Pareja was appointed in February. Pareja played with FC Dallas for seven years before becoming their assistant coach in 2005. He became the head coach of the Colorado Rapids at the start of the 2012 season, and successfully turned around a franchise that was circling the drain.

If you ask why should the Timbers be worried about that? Well, last week, the Rapids team built by Oscar Pareja beat the Timbers 2-0 in Denver. While Pareja hasn’t had two years yet with Dallas, early signs are showing this side to be relatively balanced. With Blas Pérez and Fabián Castillo up top, Dallas will be a handful in attack for any team. Castillo will be used to attack down the left channel so expect Jewsbury to have his hands full. Mauro Diaz is the new Argentinean addition for Dallas this year. Similar to Portland’s Valerie, he is a handful for defenders and could cause quite a few headaches for the Timbers defense. So far this season, Dallas are averaging 2.3 goals per game, with two thirds of those coming from open play.

Their weaknesses lie in defense. While Adam Moffat was brought in to be a defensive Midfielder, that would sit in front of the central defenders, he has a tendency to roam up the field looking for opportunities to shoot. Dallas would be better served by Moffat staying back. The Timbers can attack this weakness and try to unlock space between the midfield and the defense that would allow the likes of Nagbe and Valeri to take advantage of.

That’s not to say that the Timbers forwards will find it easy going up front. Matt Hedges has been a mainstay in the Dallas defense since joining from English side Reading Utd in 2012. Dallas keeper, Chris Seitz wil be familiar to some Timbers fans. He joined the Timbers on loan in 2009 from Real Salt Lake. Conceding an average of 1.3 goals per game, Dallas are yet to keep a clean sheet.

Twice, they’ve come from behind to secure points. The first a win at home against Montreal, and a draw, away to Kansas City. In the midfield, Hendry Thomas picked up a red card for a bad tackle against Chivas, so he’s likely to be out for the Timbers game. Adam Moffat picked up a leg injury and is doubtful to make the Dallas lineup. This combined absence will likely give Portland’s Chara & Johnson the opportunity to dominate the midfield.

All in all, Dallas will be a mixed bag. Very dangerous up front, solid in defense, but massive gaps in the midfield. And that’s this weekends enemy!