October 24, 2014 by Graham Kendrick No Comments 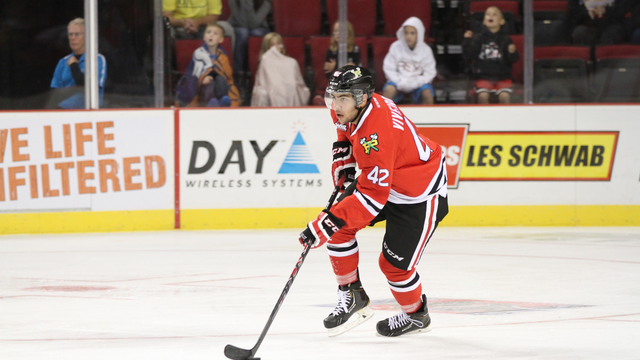 The Portland Winterhawks scored three times in the third period to earn a 5-2 win in Prince Albert over the Raiders Friday.

Defenseman Layne Viveiros was in on all three goals in the final frame, and the win improved Portland’s record to 3-2 on the six-game road trip through the East Division.

Prince Albert opened the scoring 3:50 into the game on a goal from Jayden Hart, but Portland responded midway through the frame when Miles Koules scored at the 10:59 mark to tie it at 1-1. The Hawks took a 2-1 lead with just under a minute to go in the period when Keegan Iverson scored on a power play, with Portland holding an 11-4 advantage in shots in the first.

The Raiders scored the lone goal of the second at the 13:38 mark on a goal from Mackenzie Stewart to make it 2-2 heading into the third.

Viveiros broke the tie 3:06 into the third on a power play when he hammered the puck past Raiders netminder Nick McBride to make it 3-2. He then set up the next goal when his shot from the point was deflected into the net by Paul Bittner at the 7:51 mark for a 4-2 lead. The Hawks closed out the scoring with two minutes to play, when on a penalty kill and the Prince Albert net empty for an extra attacker, Anton Cederholm fired the puck from his own zone down the ice and into the empty net to seal the 5-2 win.

Viveiros and Koules each finished with three points in the victory.

Bolton Pouliot was solid in net, picking up his first win for the Hawks with 29 saves on 31 shots. McBride finished with four goals allowed on 33 shots, with Portland tacking on an empty netter.

The Hawks were once again excellent on special teams, going 2-3 on the power play and a perfect 4-4 on the penalty kill with a shorthanded goal.

The road trip concludes tomorrow when the Hawks travel to Saskatoon to take on the Blades.