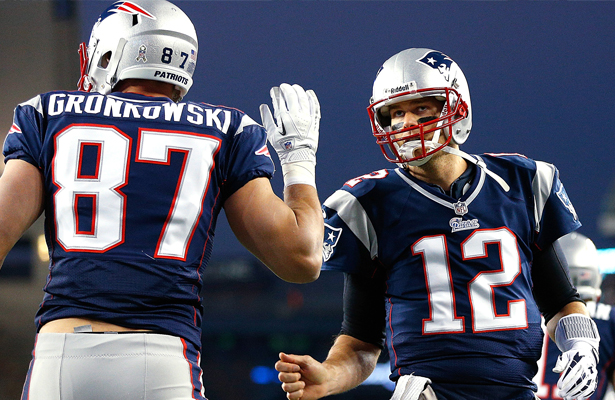 For the final installment of my midseason report series, I saved the East for last.

The AFC East is being led by the New England Patriots with a record of 6-2. Tied for second at 4-4 are the Jets and the Dolphins. While last place belongs to the Bills who are sitting at 3-5 at the half way point.

The Patriots have had to win games in not so traditional Patriot fashion. QB Tom Brady has been killing fantasy owners this year. Having very little in way of receiving because of injury, Brady has had to make do with the likes of Julian Edelman and rookie Aaron Dobson. Even though TE Rob Gronkowski has been back for two weeks, Brady still has not been the same Tom Terrific. RB Stevan Ridley has been inconsistent all year. The Pats will get RB Shane Vereen back for week 11, which will help the run game out. The defense has been pretty good thus far having only allowed one opponent, the Jets, over 27 points. Somehow, Belichick has found a way to guide his club to first place in the East and now he has them rolling and almost at full strength. The sleepers on this club are being replaced by the guys coming back from injury so you’re gonna have to wait and see who emerges out of this offense.

Talk about up and down; the Jets have won every other game they’ve played this season. They’ve compiled a 4-4 record behind the inconsistency of rookie QB Geno Smith. WR Jeremy Kerley is once again leading the Jets in receiving. The rushing attack has been equally unpredictable. RB Chris Ivory has had one game over 100 yards after being signed as a free agent in the offseason. Likewise, RB Bilal Powell has also only eclipsed the 100 yard mark once all year. These stats are not too promising considering how often the Jets run the ball. TE Jeff Cumberland is not worth rostering until we see some better quarterbacking. The defense could be used as a spot start depending on match up. As for sleepers, watch for WR David Nelson to overtake WR Stephen Hill on the depth chart after two 80+ yards receiving games in a row.

Also at 4-4, the Dolphins started out hot winning their first three games and then losing their next four. They came out of OT to beat a very good Bengals team last night. Second year QB Ryan Tannehill has been mediocre so far. Newly acquired WR Mike Wallace has been a non-factor and WR Brian Hartline has not had the type of year we expected coming off 1,000 yards last season. TE Charles Clay has emerged as a viable fantasy target. RB Lamar Miller has been serviceable as he just picked up his first career 100 yard rushing game. The defense has been average and could be considered as a spot start from here on out. No sleepers to speak of now that TE Clay has been “discovered”.

The Bills have had to endure multiple quarterback injuries as well as a disappointing season by RB C.J. Spiller. RB Fred Jackson has done a nice job filling the void in the ground game. WR Steve Johnson is having his typical “average” season. The tight end position has very little fantasy value thus far. The defense too is inconsistent and cannot be recommended. Rookie WR Robert Woods is this team’s only sleeper candidate. He has had a few nice games and could benefit from more reliability from the quarterback position.

The Patriots will win this division simply because of the lack of consistency from the other teams they are contending with. The Dolphins will finish the year at 9-7, just missing the playoffs, while the Jets will finish just behind them at 8-8. The Bills have dug themselves too big of a hole to get out of the cellar of the AFC East and will finish a disappointing 6-10.

The NFC East has shown us some really bad and erratic football in 2013. The Cowboys are at .500 and sit atop the division, while the Eagles are in second at 3-5. The defending NFC East champs Washington Redskins have disappointed their fans and fantasy owners all year amassing a record of 2-5 and are just ahead of the underachieving Giants who are 2-6 at the midway point.

Dallas has legitimate fantasy talent at all positions even though it hasn’t produced as many wins as team owner Jerry Jones would like. QB Tony Romo is having his best season so far. WR Dez Bryant has become one of the best wideouts in the game and TE Jason Witten is an above average tight end, especially in PPR formats. RB DeMarco Murray is also a viable running back as long as he can stay healthy. Meanwhile, the defense has been terrible and won’t get any better while pass rusher DeMarcus Ware is injured. WR Terrance Williams has emerged from the sleeper category taking over for the oft-injured Miles Austin. If he is still available, I recommend getting him and starting him.

Philadelphia also has major talent, however, the Chip Kelly offense, as I predicted, has seen dynamic QB Mike Vick succumb to injury. On the other hand, RB LeSean McCoy has flourished in the new offense. WR DeSean Jackson has also had a nice season so far. TE Brent Celek has not been very productive however. Lastly, the Eagles defense has not been very good partly due to the fast paced offense that first year coach Chip Kelly has installed. Keep an eye out on WR Jason Avant, if the Eagles QB position can be solidified, he should be able to produce modest fantasy numbers.

Finally, the New York Giants have limped into the halfway point winning just two games. Two- time Super Bowl MVP Eli Manning has been an interception throwing machine, hurting the fantasy value of his entire offense. WR Victor Cruz seems to be the only player unaffected by his QB’s lack of accuracy. WR Hakeem Nicks has not been as fortunate as Cruz and is not having a typical Nicks season. Second year RB David Wilson has battled his fumbling problems all year leading to the signing of RB’s Brandon Jacobs and Peyton Hillis. The defense is bad and should not be on anyone’s roster. As for sleepers, RB Andre Brown is scheduled to return from injury and should be able to overtake David Wilson for the starting running back spot.

Whoever wins this division will be 9-7. Right now, the Cowboys seem to have enough talent to be that team. The Redskins, to me, have enough pieces to at least challenge the Cowboys but will fall just short at 8-8, missing the playoffs. The Eagles will continue to struggle implementing the new schemes and will finish the year at 7-9, while the Giants will finish 2013 a disappointing 6-10.

I hope you all have enjoyed my midseason reports. It’s been a lot of work but it has been extremely helpful in trying to figure out who will be fantasy relevant going into the second half of the season. Thanks for reading and remember to Keep On Scramblin’! Also, hit me up on Twitter @MaahsScrambler for all of your fantasy needs.