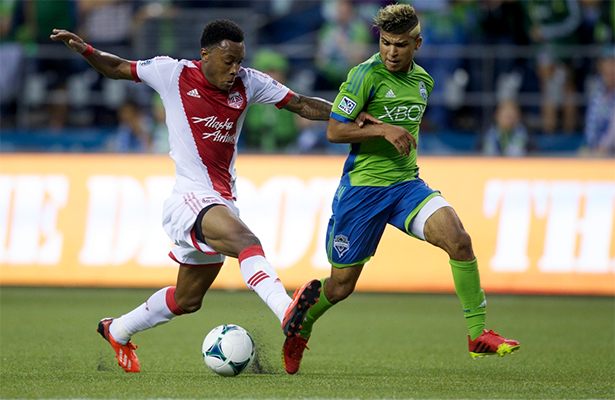 Before the biggest match in the history of North America’s most heated derby, Seattle’s Emerald City Supporters unveiled their tifo.

Like most things connected with the Sounders, it was shiny.

The slogan to go along with the sparkle? Welcome to your nightmare.

I think those supporters were referring to a Portland nightmare. But the display was so plastic and devoid of personality, it was hard to tell.

These Sounders are in a funk. Their tifos, their play, their luck, it’s not working right now. Not the best time to play an arch-rival.

As for the Timbers? It’s those big hearts and brass balls again.

There was no wilting on the big stage from Caleb Porter’s team. More unflappably, unfailingly solid football, back to front, front to back. Yes, it’s halftime in this playoff series. There are 90 more minutes to be played in what will be a deliriously intense Jeld-Wen Field on Thursday night. But the Timbers are more than halfway to their sweetest ever victory as an old football club.

As the Sounders threw more and more bodies at the ball in Portland’s area Saturday night, and as Seattle became more and more desperate, the Timbers’ calm gleamed brighter than that ECS outlay.

From the resolutely monotoned Ryan Johnson, to the cerebral Futty Danso, the composed Captain Jack Jewsbury, the calm confidence of Darlington Nagbe, the laid-back aura of Donovan Ricketts, the steady – yes, I’m actually saying this – presence of Pah Ka, and starting with Caleb Porter, there was no doubt in the Timbers’ mind that they could and would win in Seattle.

The confidence just oozes from Portland. It’s wonderful to watch. This team knows that they will come out, do their job for 90 minutes, and walk away with a win. Highs lows, lows highs. Simple game-plan. You can bet Porter and Will Johnson didn’t beat their chest and incorporate the word playoffs into their pregame addresses. I bet these guys said something along the lines of, do what we do, boys.

I think the Timbers just know how good they are.

Porter went with Ryan Johnson up top. He didn’t overthink things; he didn’t try to outsmart himself. He went with the most experienced Portland forward, the best goal-scorer.

And the Timbers were on their way with a sweeping move across the immobile Seattle defense just 15 minutes into the game, with six players involved. Eventually, Diego Chara swept the ball wide to Jewsbury, who played in one of those delicious crosses that looks like a big ol’ train rounding a big ol’ bend, and Johnson leaked free to flick it by Marcus Hahnemann to put Portland in the lead.

It was thing of absolute beauty.

Johnson barely recognized his accomplishment with his celebration. Jewsbury couldn’t stop smiling. Neither could Futty, who was first to the two to celebrate.

For the Timbers who had their doubts in years past, for Futty all the way back to the USL days, who knew exactly how good they weren’t, it was pure joy. The blend of those players, and the players who know nothing but success in the Timbers shirt has made for a perfect mentality on Porter’s team.

Hahnemann didn’t prepare himself for the shot, just the cross, and Seattle’s center-backs were lefts scrambling. Johnson was able to beat the dodgy ‘keeper near post. He may not be the most lovable guy, but RJ does work. Porter’s selection paid off.

Seattle dominated the game in terms of shots and possession, but they were unable to create off open play. Portland crammed their half, and operated like a hockey-defense with deflection after deflection away from goal.

The Sounders threatened on set pieces. Although Clint Dempsey couldn’t hit a good corner to save his seven million dollar per year contract, he could shoot off free kicks. Ricketts tremendously saved one, and the top of the crossbar denied another. It wasn’t until Mauro Rosales came on that Seattle truly had the crossing threat that they’d been missing from useless wide-men Adam Moffat and Brad Evans.

But the Sounders’ attack was simply disjointed from open play, and the Gambian Wall was a big reason why. They didn’t lose headers. All night long. Portland’s full-backs were poised too, especially the impeccable Jewsbury, who at times played midfield as well as defense on the night. Eddie Johnson didn’t complete an attacking pass until second half stoppage time.

While Seattle seemed unsure how to best operate their brand new diamond(!) formation, Portland pounced on their chances.

After another neat bit of play, substitute Kalif Alhassan slotted the ball through for Darlington Nagbe, who coolly went round the ever-scrambling Djimi Traore and slotted past Hahnemann for 2-0.

Or as Timbers fans like to call it, dreamland.

The Sounders ratcheted up the pressure after they dropped the diamond(!) midfield and introduced Rosales. And to be fair, the moody Dempsey was terrific. He went close a number of times, the only player challenging for headers in the Portland box.

In fact, his header that bounced down and hit the crossbar would have been a goal in any other stadium in MLS. But on the rock-hard turf at CenturyLink Field, painted over with distracting and demeaning gridiron lines, it bounced high and hit the bar. Karma perhaps?

Seattle’s goal came late through Ozzie Alonso after another session of ping-pong in the Portland box. Kalif Alhassan lost him, and Alonso made no mistake, sending the crowd of only around 38,000 (one has to ask, why is Seattle selling less tickets for the playoffs than the regular season?) into celebration

That’s what you get with Kalif; he created Nagbe’s goal, and his lackadaisical defending cost a goal.

That hurt. For a minute.

Because those who follow the Sounders said before the match that a loss at home would effectively end the tie.

The Timbers know how good they are. That good.

Now it’s a matter of not losing at home, a place where the Timbers haven’t lost since the second game of the season in March. It’s going to be interesting to see what both coaches to tactically and selection wise, but you can bet the Timbers won’t plan on defending for 90 minutes on Thursday night.

Before the game, the message was, “Welcome to your nightmare.”

But all the glitter and glamour in the world can’t cover up the fact that this is Seattle’s nightmare: Being overtaken by Portland, losing to their nemesis in the playoffs.

If Seattle was trying a little reverse-psychology, it didn’t work. No one understands psychology like Caleb Porter.