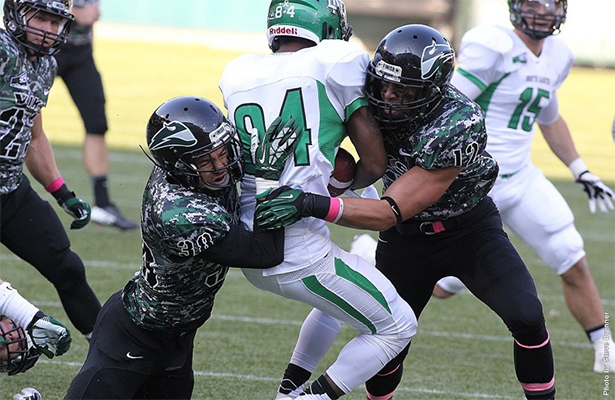 After three straight losses, PSU finally righted the ship last Saturday with a fourth-quarter comeback and 14-10 win over North Dakota. The Vikings got excellent defense (238 yards allowed), timely special teams play (a blocked punt that led to the Vikings first touchdown) and enough offense (392 yards and two fourth-quarter scores) to get the win. PSU trailed the entire game until DJ Adams rumbled in for a pair of touchdowns in short-field situations. The Viks led 14-10 with just over nine minutes to play and the defense took it from there.

Portland State’s fourth win of the year guarantees it a better record than last year (3-8). Now, the Vikings try to make it two in a row and get back over .500 when they face Weber State.

The Wildcats have had a rough go of it this season, struggling to a 1-7 mark. After a season-opening win over Stephen F. Austin, WSU has lost seven straight. The Wildcats are coming off a bye last Saturday.

Although Weber State is currently tied at the bottom of the Big Sky Conference standings, the Vikings still need to stop a five-game losing streak to the Wildcats – with three of those losses coming at JELD-WEN Field. PSU’s last win over Weber State was a 20-10 decision in 2006. In recent years, the Wildcats have won close games in the late-going against the Vikings. Weber State scored in the final minute of the game in both 2009 and 2010 to earn come-from-behind wins. Then, in 2011, with PSU hoping for a post-season berth, the Wildcats broke open a 27-27 fourth-quarter tie to beat the Vikings at home, 48-33, in the season finale.

Portland State and Weber State did not meet in 2012 due to the newly-expanded Big Sky Conference.

This week’s game is not televised. It can be heard on Freedom 970 AM and www.freedom970.com. The pre-game show begins at noon. A live video stream is available at www.WatchBigSky.com.

Portland State travels to Idaho State on Nov. 9, comes home to face Sacramento State on Nov. 16. Then concludes the regular season at Eastern Washington on Nov. 23.

After a season-opening 50-40 win over Stephen F. Austin, Weber State has lost seven straight games. The Wildcats are 1-7 overall, 0-4 in the Big Sky Conference.

In fact, after scoring those 50 points in the first game, the Wildcats have only 57 points scored in the next seven. They have given up 31 or more points in every game and 70 points on two occasions.

Freshman quarterback Austin Chipoletti leads the Wildcat offense. He has completed 95-163 passes for 837 yards, two touchdowns and five interceptions. Senior Erik Walker has been the top receiver with 41 catches for 449 yards and a touchdown.

Bo Bolen leads the running game with 85 carries for 417 yards and four touchdowns. The Wildcats average over 150 yards rushing per game. Bolen also returns kicks, punts and has 15 receptions. He averages 104.9 all-purpose yards per game.

Linebacker Roman Valenzuela has 67 tackles to lead Weber State. Anthony Morales, also a linebacker, has 55 tackles, including six for losses.

VIKINGS ON THE RADIO: All Portland State football games can be heard on Freedom 970 AM and www.freedom970.com. The Viking Pregame Show begins one hour prior to kickoff each week… Tom Hewitt (play-by-play) and Mike Lund (analyst) call the action.

VIKINGS ON TELEVISION: Portland State has four televised games in 2013, three of which are on the Big Sky Conference Root Sports Game of the Week. The final televised game is coming up on Nov. 23 at Eastern Washington, 2:45 p.m., Root Sports.

VIKINGS ON THE INTERNET: Live streaming video of all Portland State home and Big Sky Conference games can be seen free at www.WatchBigSky.com… Live stats for Portland State home games are at www.GoViks.com with a mobile phone feature for in-stadium and on-the-go viewing: http://viksmobile.com.

Portland State’s defense came up big in a 14-10 win over North Dakota last Saturday at JELD-WEN Field. A big part of that success came from senior safety David Edgerson, who had two interceptions in the game. For his performance Edgerson has been named the Big Sky Conference Defensive Player of the Week.

Edgerson made an interception in the second quarter, then added a second in the fourth quarter to seal the win. With 1:57 left in the game, North Dakota was driving for a go-ahead score. But Edgerson picked off a pass that had been deflected by Viking cornerback Aaron Sibley. That sealed the Viking win. Edgerson also had three solo tackles in the game.

Edgerson, a 5-11, 205-pound safety from New Orleans, LA, has four interceptions this season to lead the Big Sky Conference and rank fifth in the nation. He has 43 tackles for the season to rank third on the Viking team.