The Winterhawks Return to Home Ice 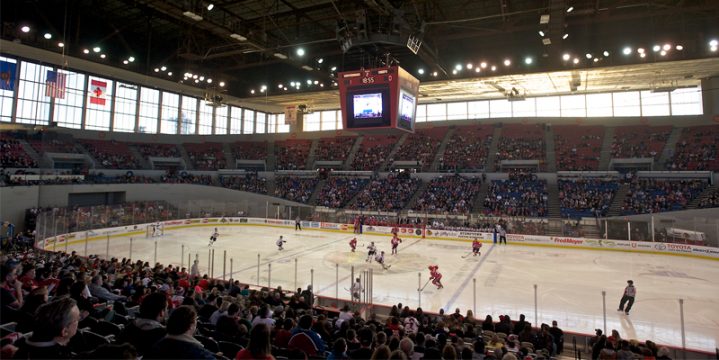 As predicted, the long bus ride through Canada has broken the nasty streak of losses for the Hawks through some combination of close-quarters bonding, third-period roster experiments, and a team’s desire to wash away that 10-3 massacre in Brandon. In the end, they finished the road trip with 4 out of 6 games sealed (with that last-second loss in Swift Current not hurting too terribly).

But now comes the inevitable question: can they play like that here in Portland?

Of the six home games we’ve seen in the Moda Center this season, all have been losses to teams that are arguably below the Winterhawks’ caliber. And we now have five more games as the defending home team and a transition back into the Veterans Memorial Coliseum.

Coach Jamie Kompon seems to have made his selection from his…let’s say, ample roster of goalkeepers. Bolton Pouliot started in the net for the last three games, with two wins and that squeaker in Swift Current. Tellingly, Pouliot finished each game that he’s started for Portland, and his number of goals allowed in have decreased exponentially from 5 in Swift Current to only 1 in Saskatoon. In only three games. Now, I’m a fan and supporter of Adin Hill’s work in between the posts, but even I can’t argue with these results. And all the hockey fans in Portland can sleep well knowing that Brendan Burke was given way more than a fair shot to step up his game. Alas, he’s averaged 4 goals allowed for each of the eight games he’s played in, and he was replaced by either Hill or Pouliot in half of those games. No WHL team would allow a starter to continue that, and certainly no NHL team would look kindly on their draft pick doing so in his final junior season.

Of course, the two sizable wins in a row could be attributed just as easily to the other screw-tightening measures on the offensive lines. The team leaders have finally come alive, with Bjorkstrand knocking in a hat-trick in Saskatoon, Vivieros having his hand in three different goals in the third period against Prince Albert, and Paul Bittner vigilantly pitching in with deflection goals. Chase De Leo and Nic Petan have been consistent through the entire road trip as reliable scorers, with a combined 20 points between them. And hallelujah, the special teams have finally found their stride as well with the PP unit going 2 out of 3 in Prince Albert and 2 out of 4 in Saskatoon, and a near-perfect penalty kill ratio for both games.

This team is starting to look like that championship team from last year, and surprisingly it’s due to new Coach/GM Kompon’s shrewd acquisitions of Pouliot and Miles Koules (RW), and a road trip. The defense still has some definite issues to work out, but I hope everyone will permit me the cliché Yogi Berra reference when I say that ninety percent of this stretch of home games will be mental, and the other half physical. The Winterhawks have to adjust to playing in the more periphery arena in the Rose Quarter, they’ll have to deal with more concrete roster decisions, they have to stay focused while going back to regular housing and regular schedules (some involving school schedules), and they have to do it while playing against last year’s biggest rivals in the Western Conference (Kelowna Rockets) and the team that beat them out of the Ed Chynoweth Cup (Edmonton Oil Kings).