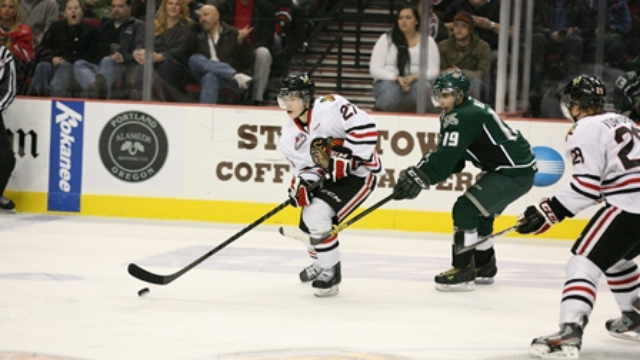 The Portland Winterhawks continued their preseason schedule with a 4-2 win Sunday in Everett against the Silvertips, giving the Hawks a 3-0 record over the weekend.

They struck quickly Sunday, as just 31 seconds into the game Nic Petan took a feed from Oliver Bjorkstrand and scored for an early 1-0 lead. Everett tied it at the 4:07 mark on a goal by Lucas Skrumeda, but the Hawks regained the lead with a power play goal at 6:37 as Bjorkstrand set up defenseman Blake Heinrich for his third goal of the preseason and a 2-1 lead Portland took into the second.

The Silvertips tied it midway through the second when Graham Millar scored at the 10:18 mark to make it 2-2, which remained the score going into the third.

Petan and Bjorkstrand struck again for the Hawks early in the third, this time with Petan setting up Bjorkstrand for a goal at the 2:38 mark and a 3-2 Portland lead. It remained a one-goal lead until the 15:53 mark, when Chase De Leo went high past netminder Mario Petit to give the Hawks a 4-2 win.

Bjorkstrand finished with three points in the win, while Petan added two. Michael Bullion was in net for Portland, and stopped 32 of the 34 shots he faced.

Portland was 2-6 on the power play and a perfect 6-6 on the penalty kill.

The preseason action continues Friday at 3 p.m. when the Hawks take on the Kootenay Ice in Kennewick, WA.