October 4, 2014 by Graham Kendrick No Comments 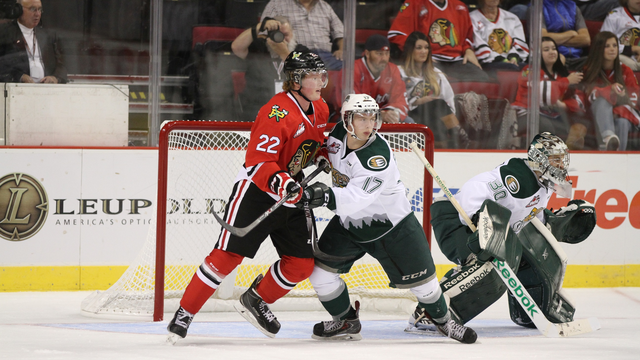 Alex Schoenborn scored the overtime winner as the Portland Winterhawks earned their first win of the season Saturday, a 3-2 victory in Everett.

Portland opened the scoring 11:49 into the game when Chase De Leo tipped in a Layne Viveiros point shot for a 1-0 lead, the lone goal of the first period.

Everett evened it 3:10 into the second on a power play goal from Nikita Scherbak to make it 1-1, but just 3:11 later Portland’s Tyson Predinchuk went top shelf over Silvertips goalie Carter Hart as the Hawks regained a lead at 2-1. The Hawks kept applying pressure and hit two goalposts in the second, but Everett tied it when Remi Laurencelle scored at the 16:42 mark to tie it at 2-2 going into the third.

After a scoreless third period set up overtime, Portland dominated the extra frame. Miles Koules, acquired earlier in the week by the Hawks, carried the play in the Everett zone, and finally Schoenborn collected the puck behind the Everett net and banked it in past Hart for the win.

Brendan Burke earned his first win of the season in net with 26 saves on 28 shots. Hart took the loss for the Silvertips, giving up three goals on 31 shots.

Portland was again without Nic Petan, who remains with the NHL’s Winnipeg Jets during their preseason play.

The Hawks are back in action Monday when they play a road game in Victoria against the Royals at 7 p.m.

Why You Should Check Out Bike Polo Matches At Alberta Park