October 3, 2014 by Graham Kendrick No Comments 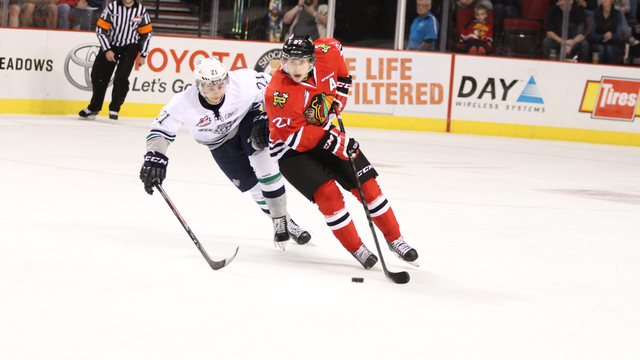 The Portland Winterhawks fell 4-3 in a shootout to the Seattle Thunderbirds Friday at the Moda Center. Despite the loss, the Hawks picked up a point in the standings.

Portland carried the play through the early part of the game, and struck at the 9:53 mark of the first when Evan Weinger kept the puck on a 2-on-1 and fired it over Seattle netminder Taran Kozun’s glove for a 1-0 lead. It was the lone goal of a period in which the Hawks outshot Seattle 13-2.

Seattle tied it midway through the second on a goal by Nick Holowko to even the game at 1-1. Later in the frame at the 16:52 mark, in his first game back after an extended stay in the preseason with the NHL’s Columbus Blue Jackets, Oliver Bjorkstrand scored a highlight reel shorthanded goal. He rushed into the Seattle zone, turned a defenseman inside out and from the side of the net, lifted a backhand into the top corner over Kozun’s shoulder for a 2-1 lead Portland took into the third period.

It remained a one-goal lead until the 10:18 mark of the third when Seattle’s Keegan Kolesar scored a power play goal to tie the game at 2-2. The Hawks regained the lead with just under three minutes to play when Paul Bittner took a feed in the slot and snapped it past Kozun for a 3-2 lead. But just 30 seconds later Seattle’s Ryan Gropp tied it again to knot it at 3-3, setting up overtime.

After the five extra minutes didn’t solve anything, the game went to a shootout. Portland’s Dominic Turgeon scored on his first attempt, as did Seattle’s Mathew Barzal. Neither team scored in the second round, and after the Winterhawks were stymied in their third round attempt, Seattle’s Donovan Neuls scored the winner for the visitors as they picked up the 4-3 win.

With Bjorkstrand making his season debut tonight, Nic Petan is the lone Hawk remaining in NHL preseason play, with the Winnipeg Jets.

The Hawks are back in action tomorrow when they travel to Everett to take on the Silvertips.

5 Gorgeous Oregon Hikes to Get You Psyched About Autumn