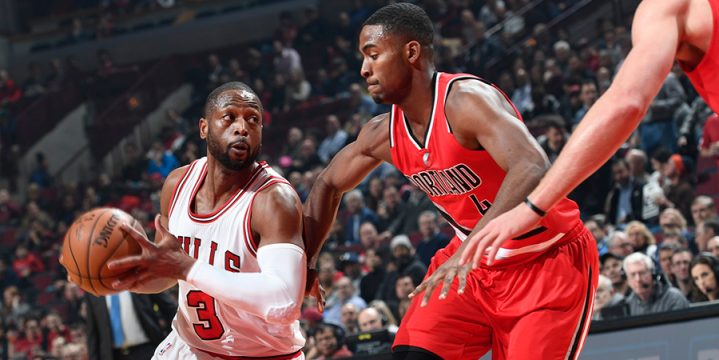 There was 6:50 to play in the fourth quarter. With the Chicago Bulls down five coming out of a timeout, Jimmy Butler stood at the top of the three-point line, ball in hand. Evan Turner was the lone soul in charge of keeping him from the cup.

Butler juked right, went left. Turner stayed with him through the dance, but fell behind when it became a sprint.

Chicago’s best player put up a shot at the rim that he’s surely made hundreds of times before. But unlike those previous buckets, a man standing 6’10” who goes by “Phys Ed” was there to erase all hope.

Ed Davis rose, arm stretched to the heavens. The ball sailed back to where it came from.

Out of bounds, off Chicago.

It’s plays like this during the Portland Trail Blazers’ 112-110 road win Monday that define what’s wrong with Portland while simultaneously showing what it’s capable of.

On one hand, Butler got to the rim seemingly at will against one of Portland’s best perimeter defenders. Conversely, Davis, a player known for his physicality around the rim, made up the difference by swallowing a superstar’s shot and returning it to sender—a play that would become a four-point swing after Turner scored in isolation on the other end.

So far this season, the Blazers have had virtually no problem creating success through offense. They entered Monday’s contest averaging 110.2 points per game, which was good enough for fourth in the league. But as the current 12-10 record indicates, there’s more that goes into winning than putting up solid scoring numbers.

As the cliché goes: Defense creates offense. Need more evidence? Look no further than the very next play following Davis’ block. Because on the Bulls’ next possession, Butler attacked again. This time, the 27-year-old All-Star was stripped by Damian Lillard.

With Portland once again in possession and advancing over halfcourt, Lillard set up shop behind the arc. He stared into the eyes of former teammate Robin Lopez, who inexplicably became the only defender to challenge him on the perimeter.

Lillard sized him up, offered back-to-back jabs, then launched a three-pointer from the “D” in the “United Center” logo.

And it all began with defense.

There’s two ways to look at all of this. The pessimist’s view (maybe “realist” is more accurate) says that Portland’s high-octane offense is simply masking the problem at hand. After all, the Blazers hung 112 points on the Bulls (a number that would translate to the second-best average in the league) and only snuck away with a two-point victory.

The optimist, however, views these fourth-quarter plays as pieces of a bigger picture. In a matter of 55 seconds, Portland showed exactly what defense can do for a team that already has a potent offensive attack.

For the record, Lillard backed up his deep three-pointer with another forced turnover on defense the following possession. But like the plays before it, the individual outcomes don’t mean nearly as much as the sentiment behind them.

The Blazers are officially trying on defense. This isn’t a moral victory or a feel-good story; it’s legitimate, tangible proof that this squad can make defensive plays that swing or increase momentum.

Ahead of Monday’s contest, Portland was 28th in the NBA in points per game allowed, giving up 112.5 on a nightly basis. Things were even worse when looking at defensive efficiency—an advanced metric that had the Blazers labeled dead last.

But now, with evidence of defensive competency—not to mention Al-Farouq Aminu back in the lineup—it’s clear to see that Rip City doesn’t have to be a place void of ball-stopping.

“We’re finally putting it together,” Lillard said of the Blazers’ defense during Monday night’s walk-off interview.

That should be a scary thought for any team out West hoping Portland had already reached its ceiling this season.

Portland Winterhawks, Near The Halfway Point Of The Regular Season, Continue To Fight For A Playoff Spot