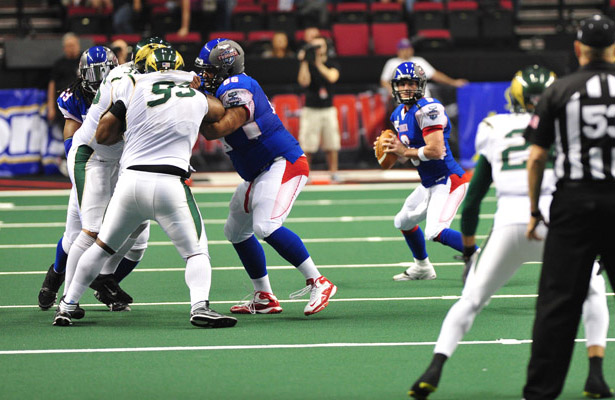 In a rematch of their week one matchup, the Portland Thunder (0-5) led the San Jose SaberCats (3-3) for most of the game before San Jose took control with 5:28 remaining to win 38-32.

Each team committed two turnovers before Portland scored the first touchdown of the game when Ayo Idowu ripped the ball from Odie Armstrong’s arms ran it into the end zone. The Thunder defense forced five turnovers in the game.

In his first game for the Thunder, quarterback Kyle Rowley completed 21 for 45 passes and threw two touchdowns and an interception when a pass hung on the top of the boards for a defender to pick up. Portland’s fourth quarterback in five games, Rowley hopes to change the tide in Portland. “My goal every game is to score 70 if not 80 points” said Rowley, “and we didn’t even do half of that, so when that starts happening, we will be a good team.”

Fullback Dustin Risseeuw, an open tryout participant signed to the team this week, recovered two of Portland’s own kickoffs (bar balls) and rushed for a touchdown.