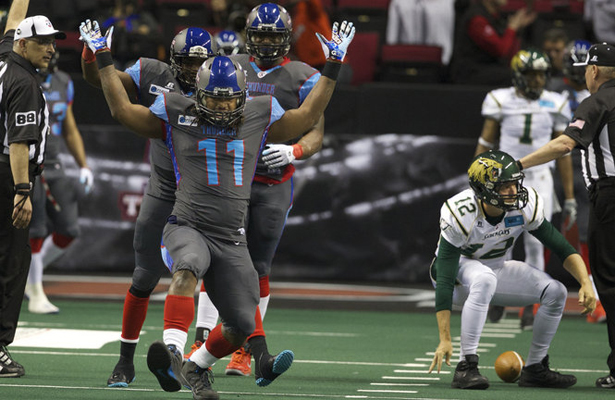 While the Portland Thunder have struggled offensively to an 0-5 record in their inaugural season, one thing that has been overlooked is the increasingly impressive play of their defensive unit.

In fact, especially considering the relative youth and inexperience of the Thunder team, it might be surprising to say that the defense is one of the best in the Arena Football League. Don’t believe me? Here are some of the stats that prove why offenses around the league are finding themselves Thunder-struck.

64 – The number of points surrendered to the San Jose SaberCats in week one of the season. By far, this was the Thunder’s weakest outing but the defense has shown much more improvement since then.

37.25 – Since week one, this is the average number of points surrendered by the Thunder defense, not counting defensive or special teams points for the Thunder’s opponents. Not only does this show a marked improvement over time, it ranks the defense for the Thunder well above the league average. Speaking of…

46.52 – Throughout the season, this is the average number of points allowed by defenses in the AFL. That means that the Thunder allow over nine points less per game than the average defense in the AFL.

14 – The number of turnovers forced by the Thunder defense. This ranks as the third most in the league, behind just the Pittsburgh Power and the Tampa Bay Storm, with 20 and 16 turnovers respectively.

34 – The number of points allowed by the Thunder against the Spokane Shock. The Shock are the fourth ranked scoring offense in the AFL and they average over 58 points per game. While the Shock ended the game with 55 points, 21 of these came on either defensive or special teams points, which I don’t hold against the defense.

Of course, with a defense so stout and seemingly still improving, there has to be a reason why the Thunder are 0-5, right? These couple numbers probably sum it up as well as any.

30.6 – The average number of points surrendered by defenses facing the Thunder offense. Despite having a defense well above league average, the Thunder offense consistently falls short, scoring a full touchdown less than their defense has allowed over the past four games.

16 – The number of turnovers the Thunder offense has given away. Only two teams, the New Orleans VooDoo and the San Antonio Talons have lost more turnovers. Considering the number of times opposing offenses have started with a short field, the defense of the Thunder is ever more impressive.

The Thunder defense consistently has shown itself as one of the best in the business. And the best part? They seem to be getting better, despite an ever shifting cast of characters. If the offense, now hopefully finding stability with new starting quarterback Kyle Rowley, can catch up, the Thunder may yet make a late run in the AFL.

Writer’s Note: Many of the official league numbers on points per game include points scored by defense and special teams. I do not want to hold that against the defense. Instead, I looked at the box score for every game and eliminated points scored by means other than the offense. This is why some of my numbers differ from those of the official Arena Football League statistics.