January 21, 2015 by Mercy Strongheart No Comments 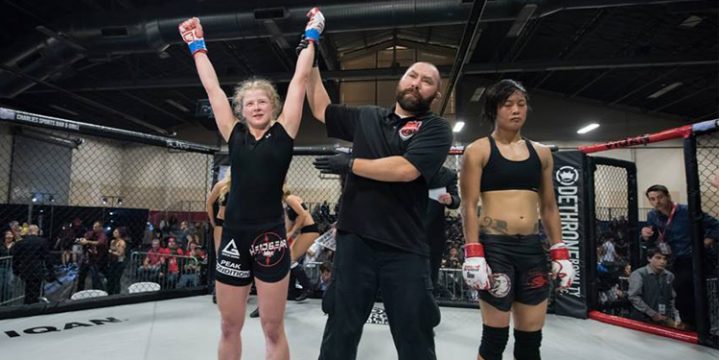 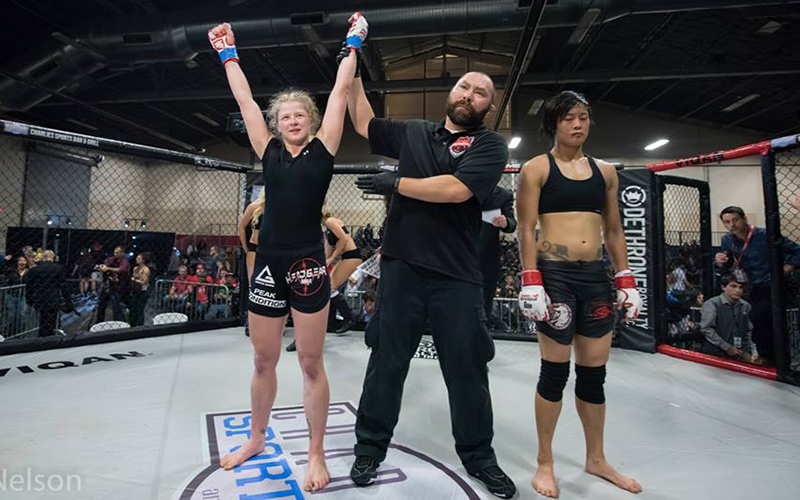 You probably wouldn’t guess that Emily Corso is a professional Mixed Martial Arts (MMA) fighter upon meeting her. The cute, bubbly 26-year old doesn’t seem to have an aggressive bone in her body.

Yet she is undefeated in her professional career, and her fierce jiu-jitsu skills keep most of her fights from progressing beyond the first round.

Most MMA fighters have a nickname. Corso’s is “The Mantis Shrimp”. She likes the nickname because it’s cute, which is the angle she’s going for. She explains that female MMA fighters tend to get boxed into being either sexy, mean, or cute.[quote align=’right’]Corso tends to smile while she fights. This trait almost earned her the nickname “The Serial Killer.” Once, a referee told her that her tendency to smile while fighting was terrifying to watch.[/quote]

“Lots of women get a lot of mileage from the sexy thing,” she says. Corso tends to smile while she fights. This trait almost earned her the nickname “The Serial Killer.” Once, a referee told her that her tendency to smile while fighting was terrifying to watch. “If someone hits me, I always smile more. I want to remember that I’m here for the fun. The moment it stops being fun is when I’ll stop.”

Corso grew up in Sitka, Alaska. She was a nerdy kid who preferred reading to sports. When she moved to Portland to attend Reed College, she thought she’d go into research or library sciences. One day, while play wrestling with another woman in the gym on campus, she realized, “I would die if someone were doing this to me for real.”  This thought inspired her to take a jiu-jitsu class as part of her PE requirements.

She loved jiu-jitsu and began to devote more and more of her time to it, finding local trainers outside of school to work with her. One day, the owner of a gym asked her to be in an MMA fight. She had never even seen an MMA fight, but said yes. After that fight she was hooked and began to work on her striking skills. 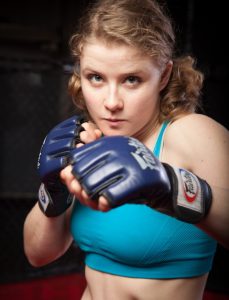 Mixed Martial Arts, also known as “ultimate fighting” and “cage fighting”, allows both striking and grappling moves. Most fighters tend to be stronger in one area or the other. The audience generally prefers to watch striking over grappling, because once the fighters are on the ground it can be hard to tell what’s going on. But Corso’s strength lies in getting her opponent to the mat quickly, and defeating them with a jiu jitsu move called the rear-naked choke, which will render her opponent unconscious in 30 seconds if they don’t tap out. “I prefer the ground,” she explains. “But I’m putting most of my training time into boxing.”

Corso trains anywhere from 90 minutes to 5 hours in a day, on top of her coaching and training of others. She says she tries to smile while she trains, so that the feeling of happiness is ingrained in her when she fights. She says that the most difficult part of her career comes from working through the frustration of mastering a new technique. “Even learning that you don’t have to be a master can be difficult,” she says.

Corso went pro last May, and in December of 2014 she was signed by Invicta, an all-female MMA promoter. Invicta will schedule and promote Corso’s fights while she’s signed with them. On their website, they promise her an Invicta debut fight in 2015. In the meantime, Corso continues to work with her Portland trainers, to work as a coach to other fighters, and to teach self-defense classes.

I recently went to watch Corso give a private lesson at Iron Ethos, a small gym in the SE industrial area that specializes in strength training for vegans. Her client, a stocky man at least two decades older than her, worked intensely on various jiu-jitsu holds with her for an hour. Corso flipped him around easily and gracefully, her long, spidery toes gripping the mat. She peppered the lesson with silly jokes in her bubbly voice. She had finished her own workout just before her client arrived, but kept up her energy and speed effortlessly.

“The hardest part of being an MMA fighter is the mental stuff,” Corso told me. “I’ve had fourteen fights in my life, but I go to the gym everyday. I take pride in listening to that voice that tells me not to give up.”