Portland Trail Blazers: 3 Things To Look For Heading Into The Season

September 30, 2014 by Garrett Thornton No Comments 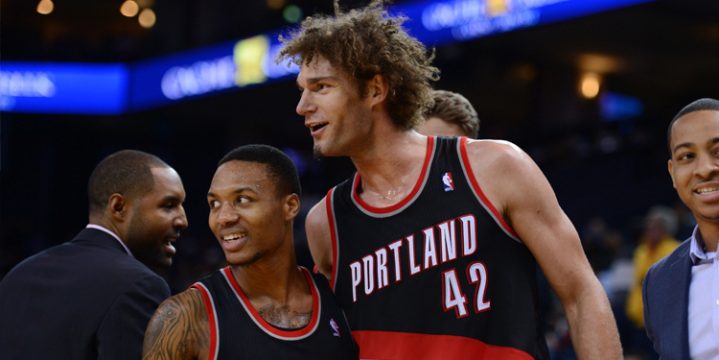 As crazy as it seems, the basketball season is here. Seriously.

Long story short, basketball is back. After the incredible, expectation-shattering season last year, there are a lot of hopes and dreams floating around Rip City. The spirit of Rip City is truly alive and the team on the court hopes to hold up their end of the bargain.

Every year there are a few specific things I keep my eye on leading into the season. Preseason can be bland and uncompetitive but can teach you a few key things about the upcoming season and the composition of the roster. This year, there are two basketball related topics and one off-the-court topic I am focusing on in the coming weeks.

The chemistry of the Blazer roster was lauded around the league last year. The ball flow and the ease of the offense were testaments to how well Coach Terry Stotts had the team playing together. The only player in the 8-man rotation that is missing from last year’s roster is Mo Williams. According to sources inside the Blazers organization, there is a belief that Williams may have been a hindrance to the chemistry. Williams was known to dribble late into the shot clock and throw up desperation shots.

Replacing Williams as the backup point guard is veteran Steve Blake. Not only a veteran to the NBA, a veteran to Portland; Blake will be a good influence to the young guards on the roster. Will Barton has already been singing praises to the leadership of Blake. The other addition is backup center Chris Kaman who will be huge in keeping Robin Lopez’s minutes down and keeping him healthy.

I don’t think that chemistry will be an issue for this team but chemistry issues tend to develop when times get tough. Times look to be tough at the beginning of the season as the Blazers open the season with games against the Oklahoma City Thunder, Golden State Warriors, Cleveland Cavaliers and Dallas Mavericks. Four out of the first five games are against playoff competition. We will see how to holds together if they are to hit some adversity early.

The last two seasons, the bench has been to downfall of this team. The production has been sporadic, at best. Williams was the top bench contributor last year and he is gone. Kaman and Blake come in to play a part on progressing the bench. But the real improvement is going to have to come from the young guys.

CJ McCollum came in from Lehigh with high expectations but those were hampered by a training camp injury. If he can stay healthy this season, the Blazers will be able to have a shooter on the floor that can hit from anywhere.

Barton and Thomas Robinson come back with expectations of continuing to be spark plugs off the bench. If they can continue to progress as players, they will be huge for a team that truly needs consistent bench play if they want to make any kind of deep run in the uber-competitive Western Conference.

The early NFL season has been completely overshadowed with issues of domestic violence and child abuse. The NBA has had its fair share of issues recently with Donald Sterling and the front office of the Atlanta Hawks. My curiosity is mainly on the players. Which player is the first to receive an over-reaction suspension? When does domestic violence take center stage in the NBA? I really expect some of these questions to be asked here in the next week or two as every team has their media days.

The excitement is going to crescendo in Portland as the Blazers continue to progress towards tip-off on October 29th. I am excited and looking forward to watching this team grow together through the next few weeks of preseason.