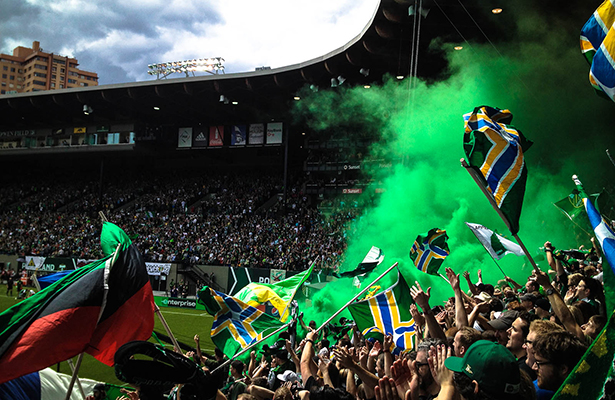 Today, a months-long wait to officially unveil Portland Timbers’ roster moves made at the end of 2013 will be over.

The Oregonian and, you know, Merritt Paulson have confirmed that the Portland Timbers will announce four roster moves tomorrow – two signings, one homegrown player, and one player loan.

The two new signings will both come from Argentina: Forward Gaston Fernandez and center-back Norberto Paparatto. The Timbers have had both players in their sights since December and are finally able to announce their acquisitions.

Fernandez is a veteran of the Argentinean league, a 5’7 dynamo who has considerable goal scoring and playmaking ability. Fernandez can play a second striker or possibly on the wing, and it’ll be interesting to see where Caleb Porter puts him.

Porter played with a target striker in 2013, usually Ryan Johnson, and Fernandez is too small to hold the ball up and act as a striker. There is one open spot in the attacking midfield due to Rodney Wallace’s crushing ACL tear.

Steve Zakuani and Kalif Alhassan are both able to fill that role and Fernandez could slide into that fight, although the boss could Supersize Porterball and play with a Spain False 9.

Portland has is stacked from the midfield up top, and they can play a few different ways. Fernandez and Diego Valeri – who recruited his countryman to come to MLS – will be fun to watch together, and Fernandez is certainly a tika-taka type to fit Porter’s system short passing system.

Norberto Paparatto, in addition to having an absolutely stellar name, is an experienced central defender from Argentina who will most likely slide into the first team.

Paparatto just hit 30 – he’s a leader, and captained Tigres before making the switch to MLS. While Paparatto doesn’t have exceptional pace, he is a much-better on-ball and ball-playing defender than anyone the Timbers have except the savvy, entrepreneurial, rum-bearing Mikael Silvestre. Between the two – and the Timbers should be thrilled with the prospect of getting Silvestre back on the field – Portland will be able to play the ball out of the back and the whole team will be more dangerous in transition.

As long as those two keep the ball in front of them, they’ll be solid in defense. But both could be susceptible with balls played over the top. The signing of Norberto Paparatto (say that name and smile) also should keep the Great Wall of Gambia together, possibly for the CONCACAF Champions League.

Jose Valencia is the player who will be loaned out – he signed his deal with Argentina club Olimpo months ago, but the paperwork is just getting hammered out now. It will be interesting to see if there is an option to buy in the Valencia deal; he’s a player Portland might want to hold onto for the time being.

Bryan Gallago, shockingly from Akron, should be the homegrown player the Timbers sign. He’s a versatile defender, and much-needed fullback depth.

All the moves point to two things: Portland is in total win-now mode – no surprise – and that Porterball could be back with a vengeance in 2014.

Down the stretch of the 2013 season, as the Timbers ground and scratched their way to a succession of 1-0 wins and eventually the Western Conference title, Portland got away from the style that defined the first part of the season.

Porter maintained that he was fine winning with any style, and injuries and a murderous schedule made it hard to play the beautiful in any case. But this team certainly has an identity and a utopian way they want to play, in fact, Paulson said on Twitter that his wish for Christmas was a “record scoring season for the Timbers.”

Both the Timbers’ new signings point to that ideal. They also show the resourcefulness of the Portland front office – while the rest of the league, small market teams like Kansas City and Columbus included – were bidding over the services of Michael Bradley and other big-name players.

It’s all part of the redemption of Gavin Wilkinson, who is on a completely unforeseen year and a half streak of brilliance. It’s almost unfortunate that he ever became interim coach, because it’s clouded the views of Timbers’ supporters on the architect of a lot of big moves and success.

The 2014 team, and season, are taking shape. The Timbers have rocked the offseason, and still importantly have two DP spots open after acquiring experienced international players. Apparently the University of Akron and the country of Argentina are enough to build the nucleus of a winning team in MLS, and the Timbers have used connections like Valeri – who is exceptionally happy in Portland – to their advantage.

Chemistry was a huge part of Portland’s success last year – not only did these guys like each other, they liked being in Portland. The signing of Pa Kah – one of the best non-DP midseason signings in MLS history – was a stroke of genius not just because of his solid play, but more-so his leadership and attitude. Glue guys like that will be huge in the coming season.

All is well for the “Akrontina Timberzips”, as @BOG put it on Twitter. There is a confidence and an air of authority around every facet of the team that we haven’t seen before. If that feeling holds when adversity hits in 2014, the coming year could be very special.

Are the Trail Blazers a Legitimate Contender To Win the West?