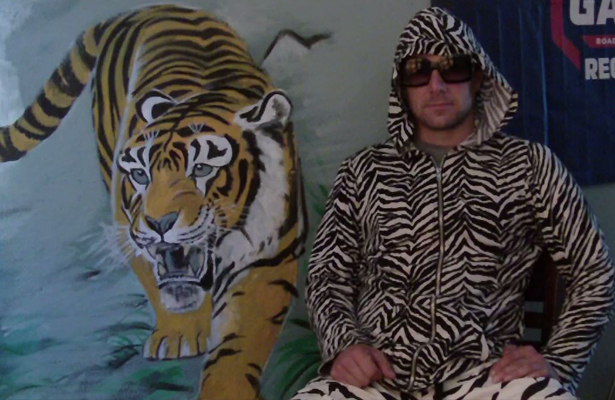 Almost everyone can remember doing burpee’s during gym class in school.

It’s that exercise where you drop to your hands in a squat position, kick you legs out and back and jump back up to a standing position. Burpees may have been the bane of your time in gym, but for 34-year-old Lloyd Weema they were his ticket to a world record.

We sat down with Weema a while back to find out why he attempted such a crazy goal.

You’re originally form Ohio. How did you end up in Portland?

I moved to Portland 2 years ago. I attended Case Western Reserve University where I ran DIII indoor and outdoor track for two years. Served as a Medic in the US Army. I play a lot of Ultimate, I have played at three Canadian Nationals and I had the opportunity to be a practice player with the Portland Stags this season. I am an instructor and coach the women’s Ultimate team for Reed College. I am a CrossFit Level 1 trainer with Goal Setting, Mobility, Judging, and Olympic Lifting Certifications.

So you’re a pretty busy guy! How often do you work out and how did you train for this challenge?

I’d like to say I work out often, but if I’m completely honest I probably don’t work out more than three times a week. When I decided to set out for this challenge, I knew I’d need to train a little harder. I was working out at least three times a day, closer to five times a day for the weeks leading up. I did a lot of biking around town putting in a few hundred miles each week, and then I just did CrossFit. It’s amazing what constantly varied functional movement does for you.

People assume I did burpees all the time. Yes, I love burpees, but about four weeks out I did them for an hour because I thought to myself, “You’ve never done burpees for an hour before.” After the hour I felt pretty good. I don’t think I did more than 50 in a row after that until the big day.

Who held the last record and what was it?

There have been multiple people who have attempted 12 to 24 hours of burpees, but at 2,000 to 3,000 most people have had enough. You have a hard time eating and keeping food down, your body hurts and then you have this want to do something other than another burpee. Just over 7,000 would give me the record, and getting over 9,400 would lock up a better 3-day than Paddy.

Will you be the “official” record holder with Guinness?

I still have to send in evidence to Guinness before they put me in their record books; they have their set of rules and regulations. The record is also currently under review by Record Setter, a similar world record database. All 72 hours was video recorded.

Why on earth did you decide to break this record?

I wanted to do something no man has ever done before. Plus, there was a charity aspect so now some people in need of clothes now have some.

How many people watched you? Who was there to help you do this?

The event was live streamed so people were watching all over the world. Over the course of the three days I probably saw close to 200 people in person.

Everyone I have ever met in my life helped me through this.

Did you first attempt to break a smaller record, like most burpee’s in a minute, hour or day?

Do you expect this record to last a while or be broken soon?

I don’t expect it to be broken any time soon, there aren’t too many people lining up to do 3 days of burpees.

Are there any other records you’re looking to break?

There are a few more burpee records I’d like to set. I actually am trying to continue my 1,000 person challenge and possibly get to 10,000 by next year. So anyone who wants to do a burpee with me, just let me know.