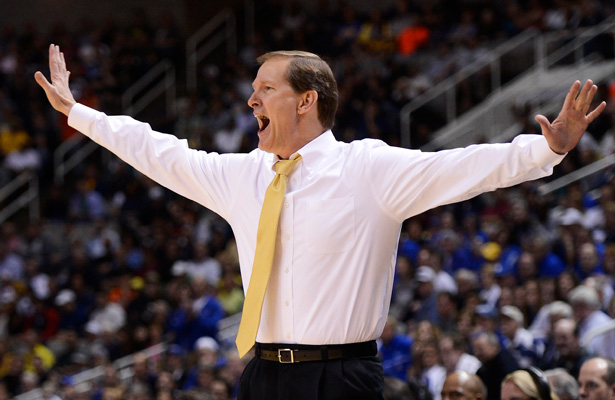 Oregon Ducks men’s basketball continues to struggle after losing their fourth game in a row.

It is hard to remember that just a few short weeks ago the Ducks were 13-0 and #10 in the country. Some—well, I did—even said they would win the Pac-12. That is still a possibility simply because they have not been mathematically eliminated yet. But at 1-4 and third to last in the conference, the Ducks are in big trouble.

Oregon is playing foul, and like their feathery namesake, going south for the winter. They play has earned those puns, and it seems they are at a loss—quite literally—on how to fix their slide.

The Pac-12 is competitive but with only one ranked team (#1 Arizona), it is hard to qualify the conference as “good.” And with Oregon’s performance the last few weeks, they can no longer be considered a good team in a mediocre conference. According to the standings, they are flat out bad.

It can now be asked if Oregon is even an NCAA Tournament team. Not because their losses are so atrocious—though Oregon State is pretty bad at 96th in ESPN’s RPI—but because they have shown an inability to fix their defensive and rebounding issues. Earlier this season they had some close escapes against Illinois and Ole Miss where it seemed defense and rebounding could be overcome by superior offense. But against conference foes familiar with their style of play—and plenty of game tape to discover ways to exploit Oregon’s weaknesses—the Ducks have crumbled.

But there is hope. The Pac-12 is tight in the middle so each game has massive implications for the post-season. Oregon’s upcoming stretch of games has gone from “a possible loss or two” to every game being “must-win”. The next game for the Ducks is against 3-3 Washington. Losing to them at this point is unacceptable simply because that would be a fifth defeat in a row. Following Washington is Washington State, one of two teams behind Oregon in the standings. Going down to the Cougars would effectively torpedo Oregon’s hopes of winning the conference and quite likely demolish any confidence the Ducks had regained against Washington. After that UCLA and USC come to Matthew Knight Arena. UCLA is an average team, and USC is dead last in the conference even with the flashy hire of Andy Enfield of Florida Gulf Coast University fame. With both at home, Oregon has no excuse not to win.

However, in order to win, head coach Dana Altman must find a solution to their defensive woes. Matchup zone, more full-court pressure, step back on the perimeter pressure to prevent blow-bys, anything. He has made his reputation on defense and now is the time to earn his paycheck. With the talent Oregon has, there is no reason for them to be performing this poorly.

According to some statistics the Ducks are not an atrocious defensive team. Against Oregon State, Oregon forced 20 turnovers. In most games, that is enough to win it. But Oregon’s poor shooting has continued during their losing streak dooming them to defeat. OSU point guard Roberto Nelson sliced up Oregon for 22 points (though committed 7 turnovers). Less pressure on the perimeter would have prevented him from sliding by Oregon’s guards to easily score on the Ducks’ poor defensive post players. With wide-open driving and rebounding lanes, it is open season on the Ducks in the Pac-12.

One thing to bear in mind for Duck fans is that in a close game (defined here as fewer than a 7 point final margin) Oregon is 4-1, including three overtime wins, meaning they know what to do when the game is tight. If they make the tournament, this bodes well for them. But that is a major if right now.