January 2, 2015 by Kyle Martinak No Comments 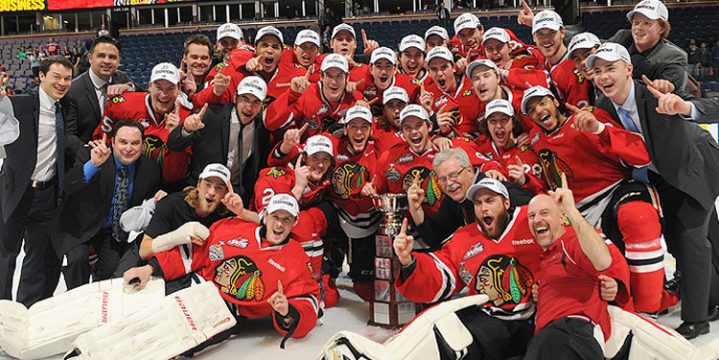 Finishing off my look back at the best years of hockey our fair city has ever seen, I direct your attention to much more recent times. While the period from 2005-2009 was a dark one for the team (ranked dead last in the division and not even making the playoffs for three years in a row), 2010 saw new ownership in Bill Gallacher and a new head coach/GM in Mike Johnston.

There was an instant turnaround, with a winning season for 2009-10 and two Western Conference titles for the 2010-11 and 2011-12 seasons. Though the Hawks lost the WHL finals to the Kootenay Ice and Edmonton Oil Kings those years, it was a massive improvement. Those years have started the division and conference streak that continues into this season, with Portland chasing their fifth consecutive banner for both.

The 2012-13 season began with a huge GM moment for Johnston: acquisition of Seth Jones. The defenseman was initially drafted by the Everett Silvertips, but was traded to Portland when the Washington team assumed Jones would be playing college hockey instead. By the end of his rookie season with Portland, it was clear the son of NBA great Popeye Jones was destined for a pro career as well. With the WHL Rookie of the Year award and a titanic 56 points for the regular season, he was drafted fourth overall to the NHL in 2013 and has since been playing for the Nashville Predators.

[quote align=’right’]It was the first year the Hawks had earned the Ed Chynoweth Cup, which had been renamed that year to honor the CHL founding father.[/quote]That’s not to say there wasn’t an overwhelming amount of talent on the starting lines. The three highest scorers in the WHL that year were all playing for Portland: Brendan Leipsic, Nic Petan, and Ty Rattie. Meanwhile, goalie Mac Carruth’s save percentage was 93% and he had 7 shutouts, capping off his final season with the Winterhawks. He is currently recognized as the winningest goalie in franchise history, and holds the WHL record for career playoff wins at 39.

Early in the season, the organization was marred by some sanctions by the WHL for violating the league’s rules on player benefits. Specifically, the franchise had paid for air travel for some players and their parents, along with the team captain’s cell phone. The team was excluded from the first five rounds of the 2013 Bantam Draft, the first round for every year until 2018, and fined $200,000. More disruptive, Mike Johnston was suspended for the rest of the season, including the playoffs.

Despite this hardship, the Hawks pulled out a fantastic regular season and took the U.S. Division and the Western Conference by storm yet again. The monumental season culminated in a WHL championship game in May of 2013 against the Edmonton Oil Kings. It was a 5-1 Portland win, giving the Winterhawks their third WHL championship and sending them to the Memorial Cup. Ty Rattie seized the MVP award that night after leading the attack with a hat trick. It was a banner moment for his career, as it was his last WHL game and it broke the league record for playoff goals.

It was the first year the Hawks had earned the Ed Chynoweth Cup, which had been renamed that year to honor the CHL founding father. The team also made it to the final game of the Memorial Cup, beating out the OHL Champions and the host team but falling to the Halifax Mooseheads of the Quebec Major Junior Hockey League.

The Winterhawks came home heroes that spring, and were appointed as the grand marshals in the Starlight Parade for the 2013 Portland Rose Festival. While there are many other seasons one could argue for, the showing for 2012-13 was a breakout year for everyone involved and should be considered the greatest season of Portland hockey in the one hundred years we’ve celebrated the sport.