Challenge Grows for Vikings as they Face Cal 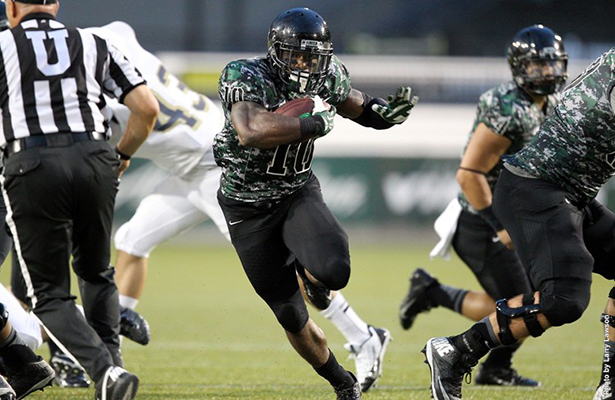 Photo and article brought to you by Portland State Athletics.

The first big test of the 2013 season awaits the Portland State Vikings this Saturday in Berkeley, CA.

The Vikings come off a relatively easy 57-17 season-opening win over Eastern Oregon last Thursday at JELD-WEN Field. Now, the level of competition takes a huge leap as PSU faces the University of California at Memorial Stadium. Cal lost its’ season-opener last Saturday, 44-30, to 22nd-ranked Northwestern at Memorial Stadium.

• Sonny Dykes has taken over as the new head coach at Cal for the 2013 season.

• PSU plays the second of three straight home games for the Golden Bears to open the season.

• The game at Cal will be the first of four televised games this season for the Vikings. It will air on the Pac-12 network.

• The Golden Bears’ aptly-named defensive line coach, Barry Sacks, also coached defensive line at Portland State from 1986-92. He was also on the same coaching staff at Nevada as Nigel Burton (2007-09).

Kickoff for this Saturday’s game is scheduled for 2:07 p.m. It will be televised on the Pac-12 Network. The game is available on the radio at Freedom 970 AM and www.freedom970.com, with a pre-game show at 1 p.m.

The game with Cal is the second of four pre-season contests leading into the Big Sky Conference schedule. Portland State is playing its first-ever 12-game regular-season. After Cal, PSU hosts Humboldt State on Sept. 14, then travels to UC Davis on Sept. 21 (the UCD game is considered non-conference although the Aggies are a Big Sky program). League play opens on Thursday, Sept. 26, against Cal Poly at JELD-WEN Field.

PSU was 1-5 on the road last season. The Vikings are 5-13 on the road under fourth-year Head Coach Nigel Burton.

California is under the guidance of first-year Head Coach Sonny Dykes. The Golden Bears were 3-9 last season, including 2-5 at home. They lost their home opener last Saturday to 22nd-ranked Northwestern, 44-30. Cal tied the game 27-27 early in the fourth quarter, but was outscored 17-3 the rest of the way.

True freshman quarterback Jared Goff threw the ball 63 times against Northwestern, completing 38 for 445 yards. He had two touchdowns tosses to Chris Harper, but was also intercepted three times. Two of Goff’s interceptions were returned for scores – one in the third quarter and one in the fourth.

Harper caught 11 balls for 151 yards, while Bryce Treggs had 13 catches for 145 yards. Brendan Bigelow led the ground game with 16 carries for 65 yards.

The Golden Bears have picked up the pace of their offense significantly under Dykes, and ran 99 plays against Northwestern, totaling 548 yards. Northwestern had 508 yards of offense, with 209 on the ground and 299 through the air.

Safety Avery Sebastian made a team-high 11 tackles and also intercepted a pass for Cal. Linebacker Jalen Jefferson and safety Michael Lowe had nine tackles each. The Cal defense forced three turnovers and made one sack.

Vincent D’Amato was 3-3 on field goals for California, his longest being 38 yards. Punter Cole Leininger averaged 43.5 yards on six boots, including a 70-yarder.

Portland State’s offense was firing on all cylinders in the 57-17 opening win against Eastern Oregon… well, almost. The Vikings fumbled on their first play from scrimmage, then lost three other fumbles in the third period – including one at the Eastern Oregon one-yard line – or the score may have been much higher. Still…

• With 672 yards of total offense, PSU racked up the 10th-most yards in school history.

• JR WR Roston Tatum had a career-high high three catches for 159 yards and a touchdown.

• SR RB Justin Lilley tied his career-best of 88 yards and scored a touchdown on 11 carries.

Portland State’s 672 yards of total offense and 405 yards rushing were the most by any NCAA I FCS school in week one of the season… the Vikings are also second in the nation in first downs (31) and first in net punting (52.0)… with three rushing touchdowns, SR RB DJ Adams is tied for the Big Sky Conference lead and ranks second in the nation… JR LB Corey Crowder’s two passes defended leads the Big Sky… JR WR Roston Tatum’s 159 receiving yards ranks third in the Big Sky Conference and fifth in the nation.

THE TOUCHDOWN MAKER: With three more touchdowns last week, DJ Adams has 30 career rushing touchdowns – including his two seasons at Maryland – on 289 carries. That is one end zone trip for every 9.6 totes.

TAKEAWAY TALLY: Portland State forced five Eastern Oregon turnovers, helping keep the Mountaineers out of the end zone until the fourth quarter. EOU did roll up 438 yards of offense, including 284 through the air. A steady diet of screen passes was fairly effective for the Mounties.

• SO CB Aaron Sibley opened the scoring by returning an interception 64 yards for a touchdown in the first quarter.

• SO LB Jeremy Lutali, playing in his first game as a Viking, had a game-high 11 tackles, 1.5 for losses and was in on a sack. He also had a second half interception.

• JR LB Corey Crowder, making his first start, had six tackles, an interception return of 44 yards, a tackle for loss and a pass breakup.

CLEAN IT UP: The downside of Thursday’s win – and the areas PSU will need to improve to have a chance at Cal – are twofold. The Vikings fumbled six times, losing the ball four times, in the game. PSU lost only eight fumbles all of last season… the Vikings had 16 penalties for a total of 139 yards… PSU was heavily penalized last year as well, averaging 8.6 penalties for 75.3 yards per game.

• The 57 points scored by the Vikings against Eastern Oregon is the most ever in a season-opening game in the 67-year history of the PSU program.

• The Vikings are now 14-4 in home openers and 12-0 against lower division team since moving to the Big Sky Conference in 1996.

• Going into this week’s televised game… Portland State has appeared on television locally in Portland 50 times since joining the Big Sky Conference. PSU is 19-31 in those games, 12-10 at home, 7-21 on the road… PSU was 2-7 in televised games in 2012.

CAPTAINS: The Portland State team selected a lineman on each side of the football as the 2013 team captains. SR C Mitch Gaulke and SR DE Bryant Long were named as Viking captains prior to the first game.