October 25, 2014 by Graham Kendrick No Comments 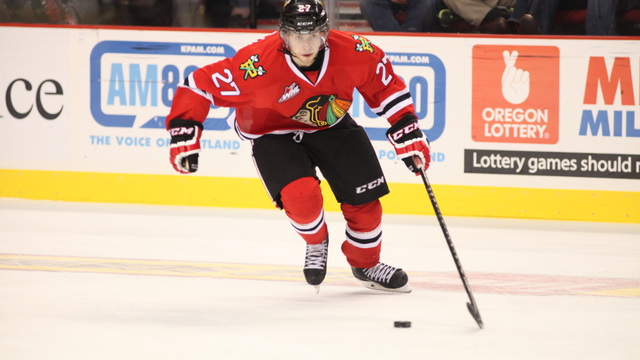 Oliver Bjorkstrand scored three times in the third period as the Portland Winterhawks wrapped up their six-game road trip through the East Division with a 6-1 win in Saskatoon Saturday against the Blades.

It was a tremendously successful trip for the Hawks, who finished 4-2 in the six games.

Led by Bjorkstrand’s hat trick, the Hawks scored four times in the third to put the game away, the second straight night they’ve finished strong after a three-goal third period paced Portland to a win in Prince Albert last night.

Portland dominated the first period with a 19-9 advantage in shots, and scored the lone goal of the frame when Chase De Leo, celebrating his 19th birthday, beat Saskatoon netminder Alex Moodie to make it 1-0 after one.

The Hawks extended the lead to 2-0 at the 3:33 mark of the second when Anton Cederholm scored a power play goal. Saskatoon got back within one midway through the period at the 10:48 mark with a power play goal from Adam Henry to make it 2-1, which remained the score going into the third.

Oliver Bjorkstrand regained Portland’s two-goal lead when he scored 9:56 into the third to make it 3-1. Just 1:30 later Miles Koules fired a blast from the right faceoff circle that beat Moodie as the Hawks went up 4-1.

The Hawks kept pouring it on, and Bjorkstrand struck again with a power play goal from a bad angle at the 14:41 mark to extend the advantage to 5-1, then completed the hat trick late in the game to make it a 6-1 score, which stood as the final.

Bolton Pouliot was again terrific in net, stopping 24 of the 25 shots he faced to pick up the win in net for Portland. Moodie finished with six goal allowed on 40 Portland shots.

The Hawks (5-9-0-2) now travel back to Portland, and will be back on the ice Thursday at Veterans Memorial Coliseum against the Kelowna Rockets in a rematch of last season’s Western Conference Final.