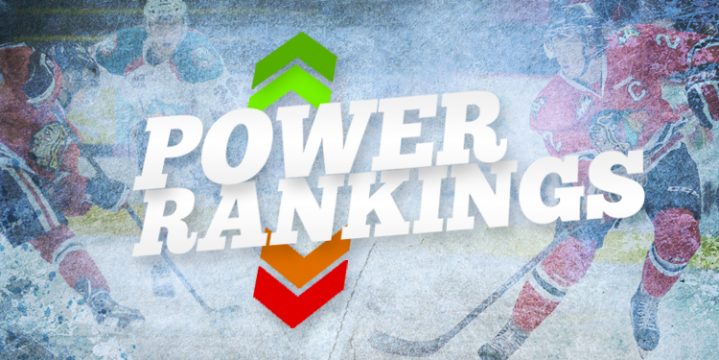 The playoff water is getting clearer by the day. With all eight teams in the east having virtually sealed up spots, only the west field is yet to be determined. With two spots up for grabs between four teams, I see this one coming down to the wire.

The real race though, is for the U.S. Division title. The Winterhawks have clawed their way back all season for a chance to win another division title. They now just sit two points back, with a game in hand. Portland plays two inferior teams this week, which would set up an important game against the one team they are trying to catch.

Portland is still continuing to score at an unbelievable rate, as they are averaging over five goals a game over the last seven games. If that continues, I don’t even think that Wheat Kings or Rockets could beat them. I said with 22 games to go could only lose six of them to catch the Silvertips. They have only lost two so far with ten games left to go. By this time next week, lets hope Portland sits atop of the division.

,46-10-7,—,1,”Brandon Wheat Kings~~No change at the top, Wheat Kings and Rockets are in the elite class of the WHL. Only ten regulation losses in 63 games is an incredible feat.”
1a,

,39-19-5,—,3,”Calgary Hitmen~~Should one of the top two teams stumble in the playoffs, the Hitmen are one of two teams I think to take them down. They are playing great hockey and are peaking at the right time. ”
4,

,37-20-5,—,4,”Portland Winterhawks~~The long chase for the division title is almost over. The Winterhawks have fought back all the way to having complete control over their own destiny through the last ten games. ”
5,

,34-25-4,—,5,”Victoria Royals~~Like I said last week, the Royals have nothing to play for. That shows in their play, as they are just 5-5 in last ten games. Royal’s fans should not be too worried though, as this team will be a tough out in the playoffs.”
6,

,39-21-3,[icon name=icon-arrow-up] +1,7,”Medicine Hat Tigers~~The Tigers slump could be over. Yeah the official collapsed and let the division lead completely slip away, but they have righted the ship with two straight wins. Can they regain the division?”
7,

,37-19-7,[icon name=icon-arrow-down] -1,6,”Everett Silvertips~~Everett has almost given up control of their division as well. Although this was not a collapse as just getting caught by the Winterhawks. They aren’t playing poorly, but are exactly playing great either.”
8,

,34-20-9,[icon name=icon-arrow-up] +1,9,”Regina Pats~~Regina is in the same boat as Victoria. Nothing really to play for but has to remain fresh for the playoffs. They are winning some games and losing some games, but should be ready for the postseason. ”
9,

,31-23-9,[icon name=icon-arrow-down] -1,8,”Seattle Thunderbirds~~Seattle had a chance to get one step closer to Portland in the division but was not able to close the deal. They now look locked in the third spot in the division and are only preparing for the playoffs. ”
10,

,33-28-3,[icon name=icon-arrow-up] +1,11,”Kootenay Ice~~Over the last ten games, the Ice has solidified their playoff hopes. With only two regulation losses over those ten games, this team has a 12-point lead with eight games to go on the final wildcard spot. ”
11,

,32-20-10,[icon name=icon-arrow-up] +1,12,”Red Deer Rebels~~The Rebels are playing solid hockey right now. They are currently just trying to peak at the right time since they are locked in a playoff spot. The one thing that will hold this team back is the amount of goals they give up.”
12,

,30-27-4,[icon name=icon-arrow-up] +1,13,”Spokane Chiefs~~The Chiefs are lucky enough to hold a nine-point lead with 11 games to go. This gives them a little insurance. Also, they have won the last three games, which also is good insurance to make the playoffs. ”
13,

,30-28-5,[icon name=icon-arrow-down] -3,10,”Swift Current Broncos~~The Broncos are not doing themselves any favors right now. They currently sit in the final spot in their division but have lost three straight. Any more and they could be looking at a wildcard spot. ”
14,

,29-28-6,—,14,”Edmonton Oil Kings~~Somehow the Oil Kings have managed to stay somewhat relevant as the postseason draws near. With two straight wins, they are solidifying the final wildcard spot, and hoping to make a surprise run at defending the title. ”
15,

,26-33-4,[icon name=icon-arrow-up] +5,20,”Prince George Cougars~~If you are like me, you are probably wondering how a team that is seven games below .500 still in the playoffs. Well they play in a weak division. Any slip up though could mean they could be fishing sooner than they want. ”
16,

,26-33-3,[icon name=icon-arrow-down] -1,15,”Vancouver Giants~~The Giants are fresh on the Cougars heels in the rankings and the standings. Only one point back and a game in hand give Giants fans hope everywhere. One time I said the Giants were the worst team in the WHL, and now they could be making a playoff run. ”
17,

,27-33-3,[icon name=icon-arrow-down] -1,16,”Tri-City Americans~~The Americans are holding on for dear life. Four straight losses have this team only two points up on the final wildcard spot. If that continues, don’t expect to see them in the playoffs.”
18,

,24-35-3,[icon name=icon-arrow-down] -1,17,”Prince Albert Raiders~~The Raiders are playing exactly like a team that is out of the playoff race. They have lost three straight and look to have officially given up on the season. ”
19,

,26-32-5,[icon name=icon-arrow-down] -1,18,”Moose Jaw Warriors~~While it is a long shot, the Warriors still have a slim chance of making the playoffs. Though it would most likely require seven or eight wins in their last nine games. ”
20,

,24-33-6,[icon name=icon-arrow-down] -1,19,”Kamloops Blazers~~Yes, the Blazers are in last place in the west. Yes, the Blazers are only two points out of a playoff spot. Though they have the worst chances out of the three teams fighting, as they would have to jump both teams. ”
21,