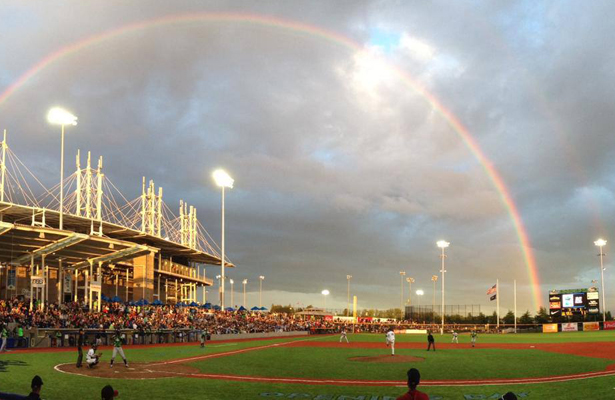 This is the sixth installment of our series “Introducing Portland’s Sports Teams,” where we introduce you to every professional, semi-professional and college sports program in Portland.

Who are the Hillsboro Hops?

The Hillsboro Hops are the short season Single-A baseball affiliate to the Major League Baseball Arizona Diamondbacks. They moved to Hillsboro after spending more than a decade in Yakima, Wash., as the Bears. Before Yakima, they played in Salem as the Dodgers, Angels and the Senators.

How many teams can you point to that are named after a beer ingredient? Let alone have a craft beer-inspired mascot? Barley, the Hops’ mascot, is about as Portland as it gets.

Many people were disheartened when their last baseball team, the AAA Beavers, bolted for Tuscon. The minor league team was a Portland mainstay for more than 100 years before packing up in 2010.

But it only took three years for baseball to return with the Single A Hops.

The team opened to huge fanfare last June, selling out their home opener and averaging 3,500 fans per game. Hillsboro finished dead last in the first half of the season but only missed the playoffs in the final round by just one game. Back in Yakima, the team had the lowest attendance in the league for six years in a row. The Hops, however, came in third with more than 135,000 fans on the season.

At the conclusion of last year’s inaugural season, the Hillsboro Argus may have put it best:

When the regular season ended on Labor Day, the Hops had missed the playoffs by a single game but displayed enough talent to leave fans wishing the season could be extended just a bit longer. One season isn’t enough to pronounce this enterprise a long-term success. But to use a baseball metaphor, the Hops have definitely made it to first base.