January 30, 2014 by Portland Sports No Comments 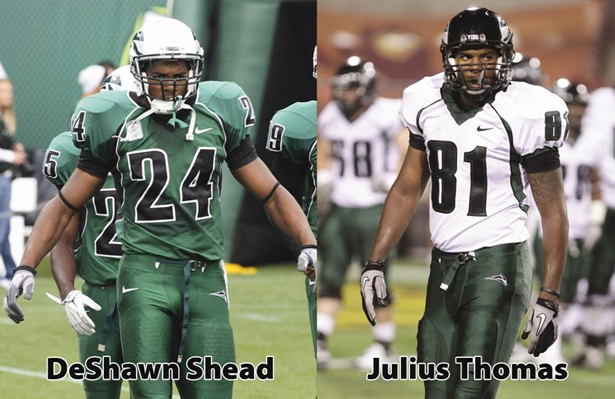 Super Bowl XLVIII approaches, and much has been about the fact that two former Portland State Vikings will be playing in Sunday’s big game at MetLife Stadium in East Rutherford, NJ.

Defensive back DeShawn Shead of Seattle and tight end Julius Thomas of Denver will take part, marking the first time in history that two former Viking footballers will play in the same game. Or, as ESPN SportsCenter pointed out on Twitter on Tuesday morning, Portland State has more players on active Super Bowl rosters than Auburn, Alabama, Oklahoma, Ohio State and South Carolina combined.

No matter what happens on Sunday, one former Portland State Viking will be a Super Bowl Champion. Thomas, a Pro Bowl tight end with the Broncos this season, played both football and basketball at Portland State from 2007-10. Shead, a special teamer and backup defensive back for the Seahawks played for the Vikings from 2008-11.

Julius Thomas fans can also look forward to a feature on the former PSU two-sport star on the Fox Pregame Show on Sunday. Fox Sports was on campus this week interviewing his former coaches.

Only two other former Portland State Vikings are believed to have played in a Super Bowl game, and both were tight ends. Clint Didier played in three Super Bowls for the Washington Redskins during the 1980s. He was a winner Super Bowl XVII and XXI. Ted Popson was a member of the 1995 Super Champion San Francisco 49ers as they won Super Bowl XXIX.

Portland State can also boast a pair of cheerleading alums on the Seattle Sea Gals cheer squad. They are Ashley and Zoe.

1-on-1 with former Viking DeShawn

Will Julius Thomas be the X Factor?

What Julius Thomas loves about Portland