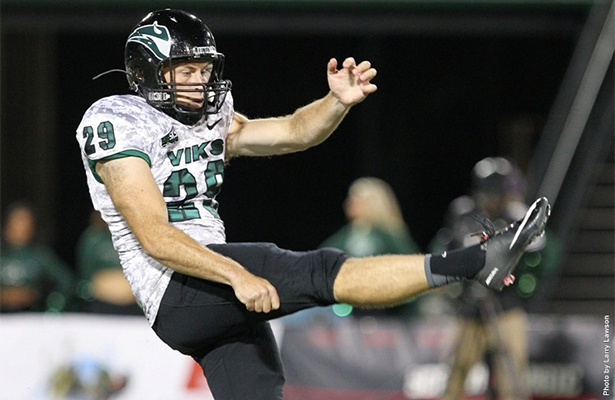 Portland State goes on the road this Saturday to take on 10th-ranked University of Montana in a Root Sports TV game.

The Vikings and Griz, both 0-1 in Big Sky Conference play, already face a key game to stay in the conference title race. Kickoff is 12:35 p.m. on Saturday.

In addition to being televised as the Root Sports Game of the Week, radio listeners can pick up the game at Freedom 970 AM and www.freedom970.com. The pre-game show begins at 11:30 a.m.

Portland State is 3-2 on the season and comes off a tough loss in its Big Sky opener at home. The Vikings held a two-touchdown lead going into the third quarter, but gave up 28 straight points and eventually lost to 18th-ranked Cal Poly, 38-34.

PSU has a 1-1 road record heading to Montana. However, the Vikings have never won a Big Sky Conference game in Missoula (0-8) and lost nine straight at Montana overall.

The Grizzlies lost their Big Sky opener at Northern Arizona, 34-16, last Saturday. The Griz are now 3-1 on the season, including 2-0 at home. Montana has won seven straight, and 11 of the last 12 games in the series with Portland State.

Due to Big Sky Conference expansion in 2012, the Vikings and the Grizzlies did not play for the first time in 17 years. Montana won the last meeting, 30-24, in Missoula in 2011.

In 2012, Montana had its first losing record since 1985, going 5-6. However, it appears the Grizzlies are on the comeback path, having won their first three games before losing at Northern Arizona last Saturday. Head Coach Mick Delaney is in his second season and has an 8-7 record overall. He will be facing the Vikings for the first time as a head coach.

Montana’s defense has been strong this season, giving up only 37 points in its first three games before allowing 34 at NAU. Still, the Griz have allowed the fewest points in the Big Sky this year and rank second in total defense (318.5 ypg).

Quarterback Jordan Johnson has been the top quarterback in the league, statistically, this season. He has completed 54-86 passes for 956 yards, 10 touchdowns and no interceptions. His quarterback rating of 194.5 ranks second in the nation. His main target has been Ellis Henderson, who has 12 catches for 270 yards and five touchdowns.

The running game has been a shared effort. Both Travon Van and Jordan Canada have 243 rushing yards this season. They have combined for five touchdowns.

Montana has a +4 turnover ratio this season.

Montana’s punting game also ranks as the best in the Big Sky. Stephen Shaw has a 46.9 average to lead the Big Sky and the Griz’ net punting of 44.0 ranks as best.

Three kickers have combined to go 6-7 on field goals this season. Freshman Ben Worst has taken over the role and is 4-4 with a long of 50 yards.

The Vikings were hindered by 13 penalties and a 2-14 conversion rate on third downs.

By James Lund | Courtesy of GoViks.com

Portland May Finally Get NHL Hockey