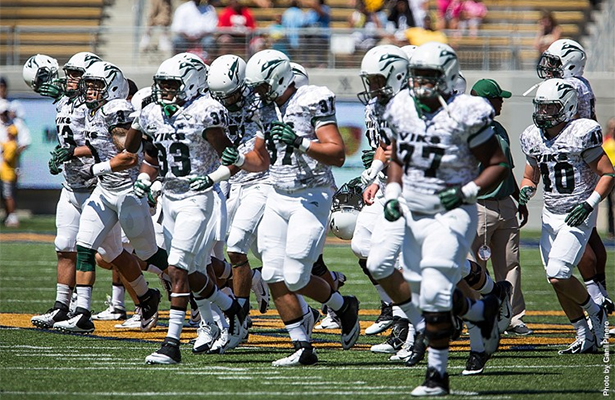 Past and present will meet on Thursday night at JELD-WEN Field when the Portland State Vikings host the 18th-ranked Cal Poly Mustangs in a Big Sky Conference opening game for both teams.

Kickoff is set for 7:15 p.m. and the game will be televised on Root Sports. The radio call can be heard on Freedom 970 AM and www.freedom970.com.

Fourth-year Head Coach Nigel Burton will lead his 3-1 Vikings into a big game against former Portland State Head Coach Tim Walsh and his 1-2 Mustangs. Now in his fifth season at Cal Poly, Walsh was the Head Coach on the Park Blocks from 1993-2006. In fact, Burton was a Walsh assistant at PSU in 2001-02.

The nationally-ranked Mustangs were Big Sky Conference co-champions last year, reaching the NCAA playoffs. They opened the season with a home win over San Diego, then lost their last two games on the road at Mountain West Conference opponents Fresno State and Colorado State.

The Vikings come into the game as one of the top offensive teams in the nation, averaging 612.0 yards and 42.3 points per game. PSU leads the nation in rushing at 325.0 yards per game.

Last year, Cal Poly beat the Vikings, 37-25, in San Luis Obispo. PSU led 25-20 with nine minutes to play in the third quarter, but the Mustangs scored the final 17 points of the game to win.

FOUR-FOR-ONE TICKETS ON THURSDAY NIGHT FOR $29

But one $29 reserved seat ticket for Thursday night’s game and receive three free tickets. That’s right, four tickets for the price of one this Thursday. Call 503-725-3307 or visit GoViks.com for more information.

Senior running back DJ Adams rushed for 208 yards on 14 carries, scoring two touchdowns and leading the Vikings to a 41-10 at UC Davis last Saturday. For his performance, Adams was named the Big Sky Conference Offensive Player of the Week.

Portland State rolled up 601 yards of total offense on 60 plays, averaging 10 yards per play against UC Davis. With 427 rushing yards on only 38 carries, the Vikings averaged 11.2 yards per rush. Adams was even better, averaging 14.9 yards per carry. He had a career-long 85-yard touchdown run, and a 27-yard touchdown run in the game. The Vikings came within 10 yards of the PSU single-game rushing record (437 vs. Idaho State, 2012).

Adams now leads the Big Sky Conference in rushing and ranks 12th in the nation at 122.8 yards per game. His seven touchdowns also lead the league. Adams has scored 19 rushing touchdowns in 15 career games at PSU to rank 11th all-time.

In the Viking running game at UCD, PSU’s quarterbacks were effective as well with redshirt freshman Paris Penn gaining 74 rushing yards on three carries and sophomore Kieran McDonagh rushing for 57 yards on eight carries with two touchdowns. Junior running back Shaq Richard added five carries for 44 yards and freshman Nate Tago had eight carries for 44 yards. Remarkably, all five runners had at least one carry of 22 yards or more.

Viking Head Coach Nigel Burton always says “it isn’t the yards you give up, its the points.” For the 2013 Viking defense, that statement has been prophetic. The Vikings have allowed 415.5 yards per game, but only 17.8 points (second-best in the Big Sky and 13th in the nation). The reason? Tough defense in the red zone. Portland State has allowed opponents 17 trips into the red zone so far this year. Only six times have the opponents scored touchdowns. There have also been six field goals, two missed field goals and three losses of possession on downs. The 70% opponent conversion rate is second-best in the Big Sky.

VIKINGS ON THE RADIO: All Portland State football games can be heard on Freedom 970 AM and www.freedom970.com. The Viking Pre-game Show begins one hour prior to kickoff each week… Tom Hewitt (play-by-play) and Mike Lund (analyst) call the action.

VIKINGS ON TELEVISION: Portland State will appear three times on the Big Sky Conference Root Sports Game of the Week this season.

VIKINGS ON THE INTERNET: Live streaming video of all Portland State home and Big Sky Conference games can be seen free at www.WatchBigSky.com… Live stats for Portland State home games are at www.GoViks.com with a mobile phone feature for in-stadium and on-the-go viewing: http://viksmobile.com.

Will the Timbers Qualify for CONCACAF?