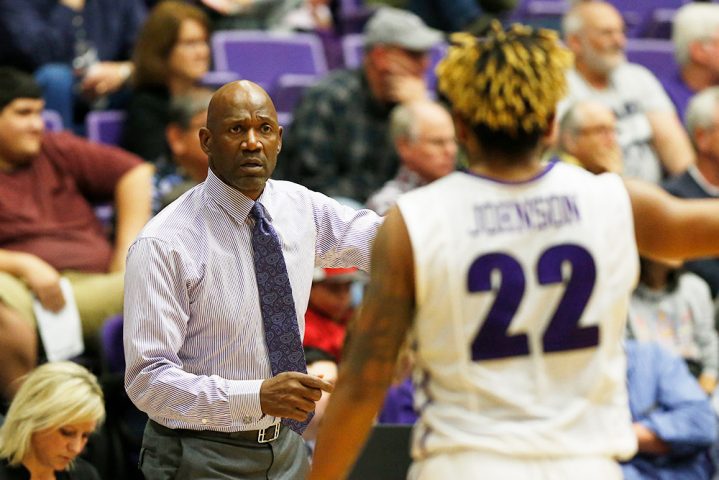 This week will be a busy Thanksgiving for Terry Porter.

Not only does he have a new moniker, college team to run and a pressing holiday tournament to prep for in Southern California, but the former 17-year NBA All-Star point guard who spent 10 years with the Portland Trail Blazers also has to keep his Twitter and social media game tight.

There are no days off for Coach Porter, especially when he’s focused with both there, here and now and equally moving a program ahead. The hashtag “#uniteportland” — which Coach Porter uses in tweets — has gained legs and embodies what Porter, Portland Pilots basketball and his staff are about these days: spreading the message.

“We’re trying the best we can [social media] as much as we can and get it behind us. We know that phone is in the player’s hands so much, hopefully they can see something that we did and get their interest…have them say ‘hey, what’s this University of Portland all about, I’m going to go on their site and check them out, see what their program is all about,’” Porter said.

“What we’ve tried to do is based off my personal experience being around good teams and some of the tendencies they have had to grow the culture.”

Before making it to the Blazers as the 24th overall pick in the 1985 NBA Draft, Porter learned the game from Dick Bennett at Division 3 Wisconsin-Stevens Point and racked up Player of the Year and MVP honors in 1984, along with being the only NAIA player named to Bob Knight’s Olympic trial team with names like Michael Jordan and Patrick Ewing. Couple that with his Rip City days and experience coaching in the league with Sacramento, Milwaukee, Detroit, Phoenix and Minnesota.

“We have worked out together with the guys doing staff and player communication building. We took the team up to Seattle to the Seahawks practice. Their coaches and some of the players spoke with us on how they went about changing their culture up there. Some of that stuff is very important as you start a program and start building with the coaching staff on what your identity is going to be,” Porter explained.

[quote align=’right’]”We’re trying to unite Portland, we’re trying to make sure the city of Portland is proud of the brand of basketball we’re playing here so that they will want to stay home and play.”[/quote]

Porter’s twelve years as a coach has something to do with his unique ability to earn the respect and attention of players at any level. Yet, Porter understands the college game is something he will need to work on as it is still rather new to him. That’s where he relies on the strength and own experience of assistant coaches, Bob Cantu and Ben Johnson.

“Trying to cover every type of motion and every type of action that we might see at the college level which is something kind of new for me. Both of my assistant coaches coach (Bob) Cantu and coach (Ben) Johnson have helped me on that.”

Porter, Cantu and Johnson no doubt have their hands full right now. While the Pilots have started 3-0 in the early season, this week alone proves another test outside of a “social strategy”. Portland faces UCLA in Fullerton, California this Thursday to tip-off the DirectTV Wooden Legacy tournament before going on to play the winner of Nebraska versus Dayton. The championship game is slated for Sunday, the 27th in Anaheim.

Recruiting is yet another area Porter and his staff are looking to cover early and often. It makes for that much more of an interesting first season in the West Coast Conference.

“One of the things we want to do when we talk about recruiting is that we want to close down our borders. If guys want to go to Oregon or Oregon State we understand that, but we want to be involved with those guys as well and show them that this a liable option. The conference is a great conference in terms of competition, we have three teams ranked in the top 30 this year, and we’re trying to emphasize that. We’re trying to unite Portland, we’re trying to make sure the city of Portland is proud of the brand of basketball we’re playing here so that they will want to stay home and play,” Porter said.

Porter isn’t the only Porter for the Pilots these days.

Porter’s two sons Franklin (redshirt transfer from Saint Mary’s) and Malcolm (redshirt freshman) have joined him at UP, which for Porter is meaningful on a number of levels and adds a whole new meaning to #uniteportland.

“It’s great to be on this journey with them. They achieved something they set out to do early on in playing Division I basketball and I’m so proud of what they have been able to achieve on their own and to have a great passion about it. To be at this point in my career and to be able to coach them is going to be special, but there will be some ups and downs. There will be adversity and pitfalls in coaching your sons. People have shared that with me. But that being, said I look forward to the challenge. In the long run there will be more positives than there will be negatives in regards to coaching them in their college careers.”

Franklin and Malcolm similar to their teammates will surely enjoy the benefits of learning from Porter as they embark on their collegiate careers, enduring the grind of a season is something Porter perfected from his playing days, and it is teaching point that he has been willing to share with this players as well.

“I tell our guys to take care of their bodies and to eat right. That’s very important. The college program is so different, afternoon naps used to be available to me as a professional player but as a college coach you don’t have that luxury with everything going on. Those afternoon naps left me a long time ago. They were pretty special back then, but your body needed it when you play at the highest level. You needed that rest.”

In these first three games of the season, Portland is getting scoring from the trio of Alec Wintering (19 points per game), Taylor Gabe (17.3 ppg.) and Jazz Johnson (14.3 ppg.), while Taylor (8 rebounds per game), Ray Bannero (6 rpg.) and Wintering (4.7 rpg.) rank among the top three on the team in rebounding.

“I think our guys do get off their feet for 30 minutes or so, and that is important, but these guys are young, they have energy, they don’t need a nap.” Porter laughed.”

“We try to identify the mistakes we make previously and hope they don’t repeat themselves. We talk about trying to build a mentality and toughness on the road to give ourselves chances to be in every game.”

From sharing his experiences, teaching the game, soaking up time with his sons and preparing the Pilots for both UCLA and an unpredictable WCC season, perhaps the largest achievement and goal this season for Coach Porter will come from bringing all of the pieces of the puzzle together in the end as he now lives the hashtag — #uniteportland.

That is plenty to be thankful for.