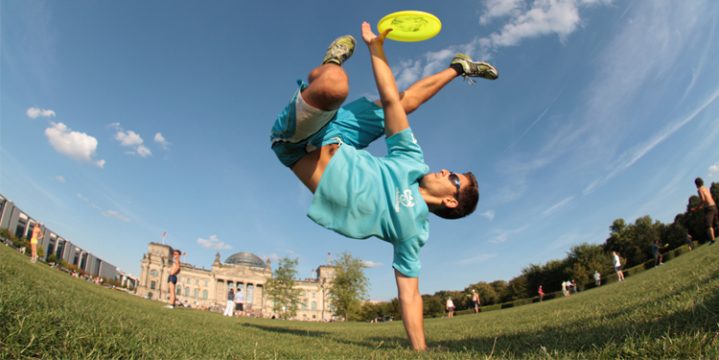 Imagine this: It’s a beautiful autumn day. The leaves are just beginning to turn yellow, but the grass is still lush and green. You’re out for a stroll on the riverfront trail in Willamette Park. A jogger runs by. A family is picnicking on the big grass field while someone else is playing fetch with their dog. A little further. Some folks are playing catch with a frisbee. What a beautiful day to be outside. And, oh, what is this? A home made sign: “Freestyle Frisbee.” What is that?

[quote align=’right’]What separates Freestyle Frisbee from other disc sports is all the stuff that happens between the throw and the catch.[/quote]You look back at the Frisbee players. One of them is holding an orange disc, while the rest are standing, looking very focussed. They seem awfully close together to be playing catch. Then, ZING, he unwinds his arm and the frisbee flies at high velocity a few feet toward a woman. She lifts her leg and puts out her hand and catches it.  No…wait, it’s still spinning… balanced  on her finger, perfectly level.

What!? She is clearly in control of the disc as she swings it behind her back and then shoots it between her legs to another player. He kicks it to someone else who lets it roll across her chest then performs some sort of aerial trick catch.

Okay, what is this Freestyle Frisbee?

In a nutshell it is both a pastime activity and a competitive sport. It was born from players doing tricks and trying to “one up” each other nearly 50 years ago. “I can catch it under my leg.” “Oh yeah? I can tip it twice and then catch it behind my back.” To this day, players of all skill levels get together to “jam” and show off their tricks to each other, always in search of the next big trick. It’s a unique sport to play as an amateur with no score keeping and no rules. Just creative, supportive playtime with friends. 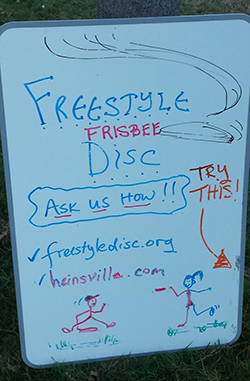 As you watch, you notice that they are constantly moving. As one person is in control of the disc, two others will take off running. Then, the one in control will slap disc so it flies toward the running group. One will make a hoop with their arms as the disc flies through toward the next person, who does a trick catch. On another series of tricks one player will control the disc on her nail and set it up in the air, under another players leg. As he takes control, she moves to his back side and waits. He turns the disc on an angle and sets it to her and she finishes by spinning around once and catching it by her ankles in a single, fluid motion.

Freestyle Frisbee really is just a sophisticated game of throw and catch. In your short time observing you recognize at least four different throws and an unquantifiable number of catches. But what separates Freestyle Frisbee from other disc sports is all the stuff that happens between the throw and the catch. You observe their various maneuvers with the Frisbee: nail delays, tips, air brushes, body rolls, and cuffs. You also notice that they constantly play into the wind, allowing the disc float up and away until the wind gently blows it back towards them. In some ways it’s like juggling, in others it’s like dance, yet it has an extreme bent to it.

You watch the Frisbee players for a bit and then chalk up another “Today I Learned” – Freestyle Frisbee. But what you don’t realize as you continue to down the path is that Portland is home of four of the best Freestyle Frisbee competitors in the world who are actively working to push their games, and the sport, forward. What is a competition like? And how did these Portland players get so good? What’s next for them in their careers? And why Portland of all places? Stay tuned as this is the first in a series on Freestyle Frisbee in Portland, Oregon.