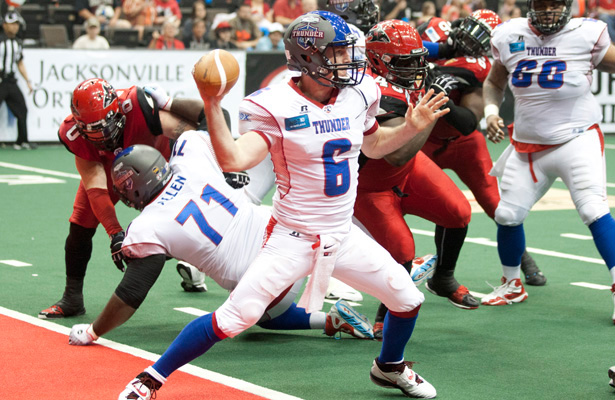 The offense finally had its breakthrough, and the Thunder capitalized with a 69-62 win over the Jacksonville Sharks.

The game started perfectly for the Thunder, as they won the coin toss, deferred, and opened the game with the ball anyway as Jacksonville’s Terrance Smith fumbled the opening kickoff. Rowley hit Alvance Robinson as Robinson flew over the boards for a 7-0 lead, and the Thunder offense was off.

The Sharks battled back in the second quarter after the Thunder fumbled on the Jacksonville one-yard line on one drive, then turned the ball over on downs at their own one on the next. But that was the only time the Thunder offense sputtered, as they piled on touchdown after touchdown after halftime.

There were so many points to go around, all the Thunder receivers got into the act. In addition to McNeil III’s four touchdowns, Alvance Robinson had two and Duane Brooks and newcomer Eric Rogers added a touchdown apiece. Davon Allen added a rushing touchdown on his first rush of the season.

Even with the offensive outburst and a great defensive performance, the Sharks ended up with one last chance from near midfield. Defensive back Eric Crocker picked off the last-ditch effort and sealed the Thunder’s first win.

The 69 points scored nearly doubled the team’s previous high of 36 points. Douglas McNeil III set a new team record with four touchdowns and also pulled in the highlight of the game, a one-handed, behind-the-head snag that kept the Thunder moving after a late Jacksonville score.

The day wasn’t all offense, though. Bryce Peila picked off a pass and returned it for a touchdown. Eric Crocker took away two passes as well. Donte Paige-Moss forced a fumble on a Jared McGriff-Culver run.

The Thunder will look to continue their roll into Tampa next week to take on the Tampa Bay Storm.