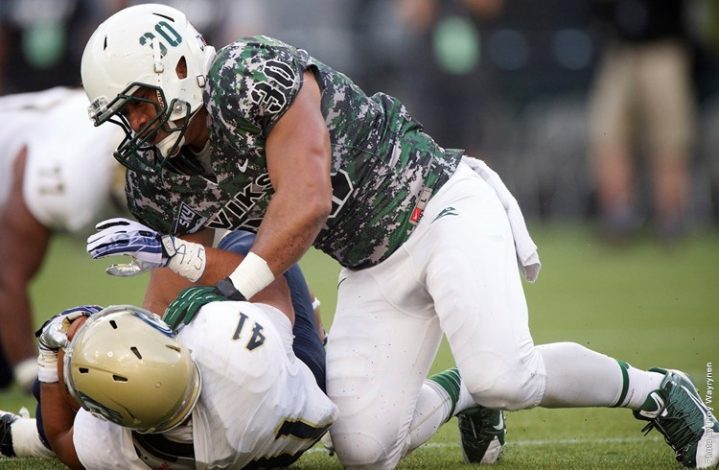 The North Dakota defense held at the goal line on the final play of the game, pulling off a come-from-behind 24-16 victory over Portland State at the Alerus Center.

It was all Vikings in the first half, as PSU led 13-3 at the break. But, second-string quarterback Ryan Bartels rallied UND back in the second half to a 21-3 advantage and the eight-point win.

Bartels led a pair of scoring drives in the third quarter, taking North Dakota to a 17-13 lead. He scored on a one-yard quarterback sneak and threw an eight-yard touchdown pass to Zach Adler.

The Vikings ran only seven plays in what proved to be a disastrous third. Momentum made a big shift to North Dakota as it gained 162 yards in the quarter and kept the ball away from PSU.

Viking kicker Jonathan Gonzales was able to tack on a 37-yard field goal with 10:54 remaining in the game, narrowing the North Dakota lead to 17-16.

But a 95-yard punt return by UND’s Alex Tillman was the death blow for the Vikings. Tillman scored with 8:47 left in the game and North Dakota took a 24-16 lead with the extra point.

That forced the Vikings to go for a touchdown and two-point conversion on their final two possessions to get the game to overtime. PSU had to punt on a 4th-and-25 with just under three minutes left but pinned UND back on their own two. After a defensive stand, North Dakota punted it back and Kasey Closs returned it to the UND 18 with 1:08 to play.

The Vikings got one first down, but on a fourth-and-goal play with six seconds left, Nate Tago was stopped at the two-yard line and UND took the victory.

Bartels completed 14-23 passes for 151 yards and a touchdown in a relief role. North Dakota managed only 262 yards for the entire game.

Kieran McDonagh was 14-36 passing for 224 yards, one touchdown and one interception. Tago rushed 13 times for 61 yards and Shaquille Richard had 13 carries for 57 yards.

Overall, PSU totaled 360 yards, but only 132 after halftime.

“They made plays and we did not. It was very simple,” said Viking Coach Nigel Burton. “We told our team on Sunday we had to do three things to win, ‘start fast, win the turnover battle and make plays’. We started fast. That was great. We lost the turnover battle, minus one – that was critical. We didn’t make enough plays and they did.

“We had our chances but we didn’t make plays in critical moments.”

The loss prevented the Vikings from getting to 2-0 in Big Sky Conference play for the first time since 2011. PSU is now 2-4 on the season, 1-1 in the Big Sky.

GAME NOTES: Kicker Jonathan Gonzales was a big factor for the Vikings again, hitting all three field goal attempts from 23, 45, and 37 yards… Stevie Coury caught a 50-yard TD pass from McDonagh in the first quarter, the longest Viking pass play of the season… PSU has lost five straight road games… Portland State returns home for a Big Sky Conference next Saturday when the Vikings host Northern Arizona. Kickoff is 4:10 p.m. at Providence Park. The game will be televised on Root Sports and air on Rip City Radio 620 AM.

Winterhawks Snag a Point in the Standings but Lose 3-2