In Time, There Will Be No Doubting Darron Thomas 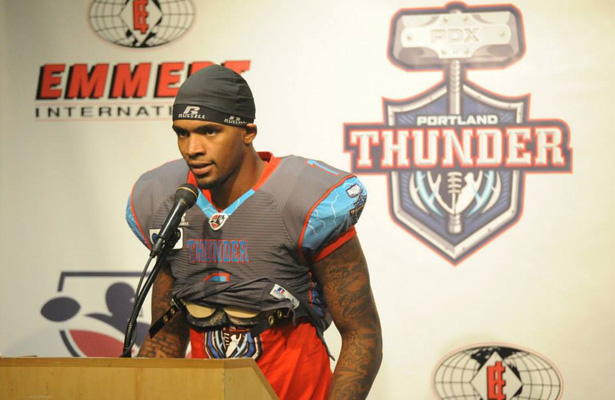 Portland Thunder quarterback Darron Thomas can be counted among the things this young team has done right.

Not only was Thomas an unparalleled success at the U of O and an obvious choice for the face of this team, but he is a player fans can grow to love … again.

First of all, he can play. Please don’t be fooled by NFL Draft pontification. Thomas can play. Criticized as a “system quarterback” there can be no arguing that the “system” with Thomas at its helm sprinted to a Rose Bowl victory and a near national title and is now the toast of football. Ironically the Oregon speed zone, or some variation thereof, is now used in Philadelphia, San Francisco, Carolina and Washington D.C. In the AFL, Thomas’ ability to avoid the sack and move logically in the pocket in high speed situations will eventually show him to be a great fit for arena ball. So too will Thomas’ team first approach. Given the opportunity Thomas can work the ball down the field well and is especially deft at the intermediate zone killer-type passes and a “take what the defense gives you” mindset that will serve well with Portland.

Furthermore, Thomas was said to have some accuracy and arm strength issues. Both of these were brushed off by multi-team NFL vet Andre Thurman, who spent 2013 with the Philadelphia Soul. “If anything Darron could take a little off at times,” Thurman joked, praising his arm. Thurman, who caught passes from the likes of Eli Manning, Ben Roethlisberger, Aaron Rodgers and Jake Locker, knows of which he speaks and listed a half a dozen NFL backups that he felt Thomas could replace at a moment’s notice.

Thomas’ collegiate resume is a who’s who of great college and now pro quarterbacks that failed to best the Ducks while #1 was at the helm. Many on this list fell to the Thomas led Ducks twice as the U of O compiled a 24 win versus 3 loss record in his years as the starter. The list includes such luminaries as Andrew Luck, Jake Locker, Nick Foles, Matt Barkley and Russell Wilson, whom he handed a Rose Bowl loss. One further gold star adorns Thomas’ list of accomplishments is his stat line versus Cam Newton in the narrow and classic national title game title loss to Auburn.

For his part Thomas refuses to be bitter or angry and continues to grant interviews to people who he is well aware had a field day with his surprising early exit from Eugene. “No … not at all, I’m a bigger person than that. I’ll talk with anyone,” he said with a smile when I asked if considered freezing out his critics. Darron is a player confident in his physical skills and well aware of his short comings with a maturity that does not squelch his fun loving nature and real ability to connect with fans.

Furthermore, Thomas has no trouble accepting “expert” opinion when it comes to his physical skill set and seems to realize that analysis of the minutiae is just part of the game within the game. What does seem to bother the 23-year-old signal caller are the reports of leadership and character issues. In fact, Thomas received not so much as a traffic ticket while in Eugene and enjoys a good relationship with many, if not all, former and current Ducks. This was evidenced as the Jumbotron at the Moda Center showed former Oregon Duck Dennis Dixon of the Buffalo Bills and Ed Dickson of the Baltimore Ravens in attendance on opening night.

Bob Jones, the US ARMY High School All-Star Game coach and Thomas’ Aldine High School coach, stated in a recent telephone interview that “I will stand up on my desk and shout out loud that this kid doesn’t have character issues.” Jones states that, as a mentor to Thomas and kind of representative at times, the only off-field mistakes Darron has made have been those of timing or out of loyalty. Thomas told Jones at one point that he had received an offer from the higher profile Thunder but that due to a previous agreement to play for his old mentor in the CIFL, he was going to turn Portland down. Jones laughs and states that he said something along the lines of “…then Darron, I just resigned as coach of that team.”

It just feels as though Thomas was the right choice to lead this team and that his return was almost preordained. The young redshirt frosh that, put in as an afterthought late in a Boise State rout, nearly mounted one of the most heroic comebacks in school history has come home. He lost that night, after all he was 9 months out of high school, but that furious rally was to be the opening lines to green and yellow legend. He elevated Oregon football to a level that Dixon, Joey Harrington or even the great Dan Fouts never came near. I believe Darron Thomas will pay off sooner than later for our new team but if he moves onto the NFL or if the Arena Football League proves to be his undoing, Thomas deserves to hear our state cheering for him again.