January 5, 2017 by Wendell Maxey No Comments 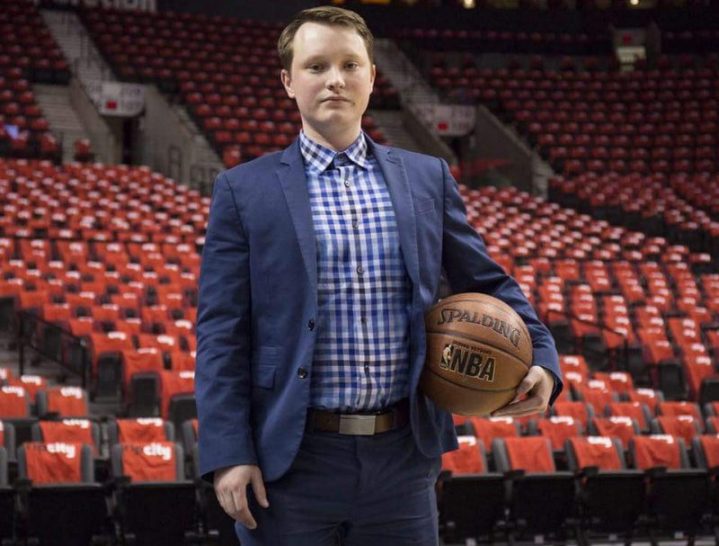 In this on-going series, we’ll get to know the names, faces and stories making news off of the court around Portland sports…

Franklin High School alum and NBA writer/reporter, Oliver Maroney takes time to share his journey from covering high school basketball to making headlines on a national level, breaking down the latest on the Portland Trail Blazers for Basketball Insiders and the podcast launch of the K/O Show.

Before we get into talking about basketball, I wanted to get your thoughts on how you balance your career and being a young dad, family man…it is not always the easiest juggling act. How do you make it all work?

It’s very difficult. I’ve always got to stay connected and informed with every piece of NBA news. With an 82-game season, practices, and interviews, it’s a juggling process. As my son gets older, I’ve tried to unplug at times and really focus on my family, but it’s difficult. Thankfully, I have the most incredible wife in the world. She supports everything I do and continues to push me to do what I love. Without her support, I wouldn’t be in this position. I love my family, I love my son, and I am absolutely grateful that they are there for me. Without someone like my wife who’s truly there for me, I honestly don’t think I’d be doing this.

You have been developing as a writer and reporter for over these last five years. What is the biggest difference for you now that you’ve gained experience compared to when you first started?

So much has changed since I started collecting data and writing short game recaps for the Oregonian. I covered high-school sports on a freelance basis for them, but I had no idea it would turn into an NBA gig. My goal back then was to do the best job I possibly could, it still is today. I’d say I grew exponentially when I started writing at a freelance level for NBA sites. I realized grammatical errors, style, and shorter pieces wouldn’t fly with editors. I had to dig deep to learn what I was making mistakes on and why it was happening. I’ll never forget a piece I wrote for C.J. McCollum about two years ago. He texted me about a day after it came out and sent a screenshot with a grammatical mistake. When a professional player corrects a piece of yours, you can only imagine how I felt. I’m thankful and grateful that C.J. pointed it out. I had to look myself in the mirror and really understand what was at stake. To this day, that’s what I always think of when I’m writing. If the player you’re writing about reads this, what would he/she think? I am so grateful that he read my work, it was the moment that I realized how important each article was.

When I landed at Basketball Insiders’, I then took another leap forward and realized that my writing needed to get better in order to stick. I worked extremely hard to  try and read others’ work, gain a deeper vocabulary, and learn how to ask the right questions for interviews. I cannot thank Basketball Insiders’ enough for taking a “flyer” on a guy like me. Alex Kennedy, Steve Kyler, and all the other people on our team are incredible individuals that have taught me a lot about this industry. It’s really been a great learning experience and I’ve learned a lot about myself in many ways as well.

I learned a lot. I still keep tabs on high school basketball and I try to make it out to as many games as I can. Some of the relationships I have in the NBA came from covering high school sports. So I always like to stay connected and up-to-date. Part of being a good writer is knowing the backgrounds, stories, and analytics of players before they go to college or the NBA. Knowing those players, understanding who they are, and watching them grow adds value to my stories and pieces when they land in college or the NBA.

What was the catalyst for you making the jump to covering the NBA and going “all in” as a freelance writer?

Spending time with some of the best media members in the league made me understand that’s what I wanted to do. Ben Golliver and Kristen Ledlow are two individuals that really showed me “the ropes,” and shared their experiences in-depth with me. They made themselves available for me and showed me what it was like to be a media member covering the game of basketball. I had known I wanted to write and discuss the game. But seeing and meeting with them in their jobs is what pushed me over the top.

How has covering the NBA as a whole with an outlet like Basketball Insiders prepared you to grow as a writer and reporter in a market like Portland in covering the Blazers?

It’s been a blessing. Every person welcomes me with open arms and has really helped me grow. The Trail Blazers are one of the best teams to cover in the league. The players are all very accessible, honest, and friendly. They’ve created a fantastic environment that rewards hard work and effort. I don’t know if I would be in this position had it not been for Oregon and Portland basketball’s wonderful community.

There are so many good people who cover sports in Portland and particularly the Blazers – from beat writers, to columnists and digital reporters, etc. Who are some of the people or/and writers who have helped influence and motivate you?

Kerry Eggers, Dwight Jaynes, Jamie Hudson, Jason Quick, Casey Holdahl, Joe Freeman, and Mike Richman are all Portland writers that I love reading. All of them have influenced my writing in some way, shape, or form. Outside of Portland, I’m always reading Chris Haynes and Ben Golliver. Those two have been instrumental in my career, but they’re also terrific writers.

How do you set yourself apart as a sportswriter in Portland?

I think I’ve got a unique angle as a national writer in Portland. There aren’t many national writers in Portland, so I bring a different perspective than many other local writers or reporters. I also make sure that when I do a story, I do it right. I know that sounds obvious, but in many cases I don’t think stories are told with the greatest details or proper quotes. I like to make sure I tell the full story. I want people to know the player and feel like they’re apart of his journey and career. I think this type of writing helps people understand and grasp what it’s like to be in their shoes. Everyone sees the outside life of a player; the money, the cars, and the fame. But many don’t grasp or understand what’s happening inside that player. My goal is to tell and capture that while adding in the on-court aspects of the game. There is much more to being a professional basketball player and my job is to help the audience understand that player both on and off the court.

Any desire to extend your writing and reporting to beyond basketball, the NBA and Blazers?

I have a passion to pursue this for as long as I can. I want to do this for the rest of my life. I grew up watching and playing all sports. I was best athletically at soccer, but basketball was the game I most enjoyed. I love this game and the people around it. I’ve been blessed to be given an opportunity to write about it. But yes, I think I would like to branch out into many different fields of writing at some point. I am always intrigued with an interesting story that has yet to be told.

In this short time, you’ve grown as a writer, have TV and radio exposure and helped launch the K/O Show with Noah Koné of K-One Media…can you share how that relationship came about and the decision to put out this podcast?

Noah and I met a few years back and have crossed paths on numerous occasions. Over the years we’d become close friends and talked a ton about many different topics. We had talked about doing a podcast and show that would feature players, coaches, agents, and other sports professionals that could speak about their story. We wanted to give people we knew a platform to discuss their story and topics around their jobs. As Noah and I were in two different cities a lot of the time, it was tough, but we managed to fill in for each other and get each episode out. We’ve been very fortunate to have many great guests on the show so far. It’s been really fun and we cannot thank the guys at Rip City Radio 620 enough for allowing us to have the opportunity to host our show there.

What can people expect from the K/O Show?

You can expect great, in-depth conversation around mostly basketball. We’ll feature players, coaches, managers, and sports professionals that will discuss their careers, current trends and topics, and a variety of other things. We’ve had the likes of Terrence Ross of the Toronto Raptors to Justin Anderson of the Dallas Mavericks. We’ve had media members like Ramona Shelbourne, Olivia Harlan, Freddie Coleman, Chris Broussard, Amin Elhassan, and others on the show. We’ve had former greats like Fred Jones and Terrell Brandon, to current college and professional stars like Jude Schimmel and Dylan Ennis. We’re just trying to give people a voice, a chance to discuss their careers, and an opportunity to have some fun. Our next episode will be an episode specifically dedicated to discussing women in sports. We have some incredible guests that’ll discuss how they got their start and why they do what they do.