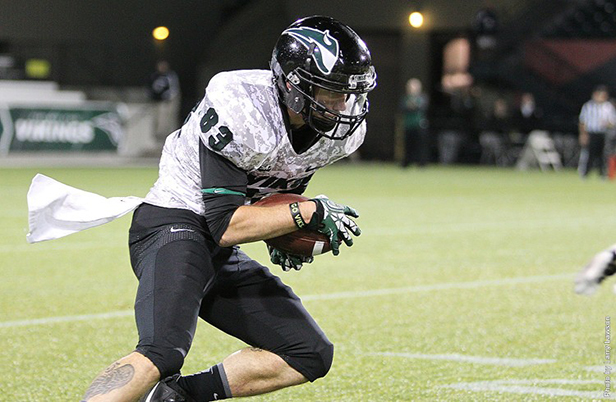 Portland State went into Washington-Grizzly Stadium trying to erase the bad memories of past football trips to Missoula. But the best laid plans…

Portland State is now 0-9 all-time in Big Sky games at Montana. The Vikings have lost 10 straight in Missoula.

Montana took advantage of Viking turnovers and penalties, dominated with a power running game and had two crucial goal-line stands keeping PSU out of the endzone.

A pair of early Viking turnovers led to a quick 21-6 Montana lead less than eight minutes into the game. Kieran McDonaghthrew an interception and also lost a fumble in the endzone. Both mistakes resulted in Griz touchdowns.

The Vikings came back with Paris Penn at quarterback and he led a 12-play, 75-yard scoring drive. Penn found Alex Toureenon a 22-yard touchdown pass and the quarter ended with the Vikings trailing only 21-13.

Montana punted on its first possession of the game, but not again until late in the half, scoring touchdowns the next five times it touched the football. The Griz led 35-13 with 8:16 to go in the second quarter.

McDonagh came back to lead a nine-play, 60-yard scoring drive late in the quarter. He hit Victor Dean on a 12-yard touchdown, closing the score to 35-20 by halftime.

PSU totaled 310 yards of offense in the half but was hindered by the two early turnovers and nine penalties. One second-quarter drive went 79 yards, but the Vikings were unable to score on four plays from first-and-goal from the four-yard line.

On the Vikings’ opening play from scrimmage in the third quarter, Anthony Goodwin picked off a McDonagh pass. That set the Griz up at the PSU 45 and they were able to score three plays later.

The Vikings showed a glimmer of hope later in the third period, driving 79 yards and getting a first-and-goal at the Montana three. But they could advance the ball only two yards on the next four plays and turned it over on downs.

Montana answered with a 99-yard drive. Quarterback Jordan Johnson finished it with a 10-yard touchdown pass to Clay Pierson – the third scoring connection of the day between those two – early in the fourth quarter. That broke the Vikings and effectively wrapped up the game.

Montana gained 581 yards of offense on 71 plays. The Griz rushed 47 times for 378 yards in the game. Travon Van gained 136 yards and had one rushing touchdown. Jordan Canada had 13 carries for 102 yards and a score.

The Vikings had 511 yards of total offense, but lost four turnovers. Dean caught four passes for 118 yards and two scores.Thomas Carter had a season-high seven receptions for 95 yards, and Kasey Closs totaled seven catches for 77 yards.

PSU also made 12 penalties for 108 yards, while the Griz had only three for 15 yards.

GAME NOTES: The Vikings have lost 18 turnovers this season while forcing 10… Victor Dean had his third field goal block of the season late in the second quarter… DJ Adams rushed 18 times for 79 yards to lead the Vikings… the loss was PSU’s eighth in a row to the Grizzlies. The Vikings last won, 35-32, in Portland in 2004… Portland State is on the road again next Saturday, playing at Southern Utah. Kickoff is 1:05 p.m. PT and the game airs on Freedom 970 AM. The Vikings have a bye week on Oct. 19.