October 19, 2016 by Portland Sports No Comments 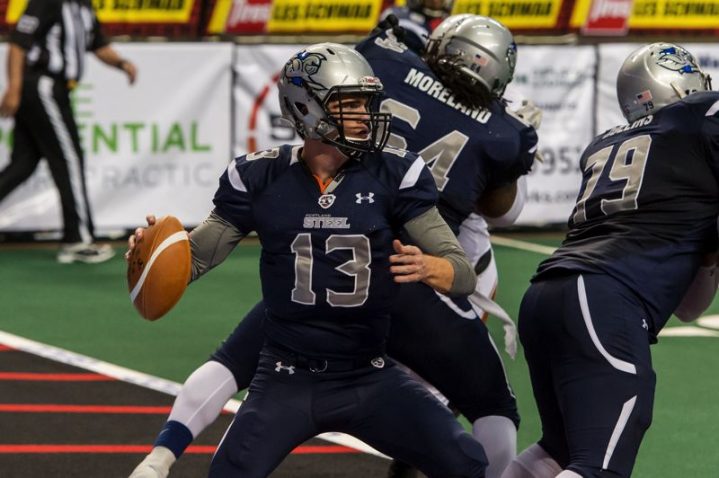 The Arena Football League has quietly ceased operations of the Portland Steel after just three seasons in existence.

The league last week held a dispersal draft in which it reallocated players on the Steel’s roster, along with players from two other teams, to the league’s remaining franchises.

Tom Goodhines, an executive vice president with the AFL, confirmed Wednesday that the league — which for the past year has operated the franchise — is no longer operating the Steel. He declined to comment further, instead referring to a statement in which the league says it’s “focused on solidifying its foundation.”

The Steel, which debuted in 2014 as the Portland Thunder, posted the second-worst record in an eight-team league that appears to have shrunk by nearly half.

In the past week, the Orlando Predators announced it would suspend operations, while two other franchises — the Jacksonville Sharks and the Arizona Rattlers — announced their intent to move to rival leagues. Then on Monday, the Orange County Register reported that the L.A. KISS — the franchise famously owned by KISS bandmates Paul Stanley and Gene Simmons — has also ceased operations.

News of the upheaval has made its way to the Portland Trail Blazers, which operates Moda Center, the Steel’s home for the past three seasons.

“Rose Quarter and Moda Center management are aware of the media reports about AFL franchises suspending operations, including the Portland Steel,” Michael Lewellen, the Blazers’ vice president for corporate communications, said in a prepared statement Wednesday. “However, we have not had any official dialog yet with AFL leadership to determine any response or next steps.”

That franchise, owned by Ted Leonsis, who also owns the NHL’s Washington Capital’s and the NBA’s Washington Wizards, is being held up by the AFL as a model for the league’s ambitions.

In its statement, issued last Friday, the AFL said it’s engaged in conversations with “strong, experienced ownership groups in markets where there is already a pro sports signature in place.”

Goodhines, the league executive, said that statement doesn’t exclude any market, including Portland, though he couldn’t say whether the league is actively discussing new ownership for a Portland franchise.

The shuttering of the Steel appears to conclude a brief, yet tumultuous, return to arena football in Portland.

The franchise made its Moda Center debut in March 2014 under the ownership of Terry Emmert, CEO of Clackamas-based Emmert Industrial, a specialist in moving heavy objects. According to the website Arenafan.com, it drew an average of 8,586 fans per game in its inaugural year, narrowly outpacing the league average.

Attendance dwindled slightly in its second year, averaging 8,290 fans per game, and by the start of its third season it became clear the franchise was struggling.

In January, the AFL announced it was taking control of the franchise from Emmert and rebranded the franchise as the Portland Steel a month late r.

In addition to its poor record, the team drew a league worst 5,055 fans per game this year, according to Arenafan, which was more than 3,000 fans fewer than the league’s second-lowest per-game average.

Erik Siemers is managing editor of the Portland Business Journal.