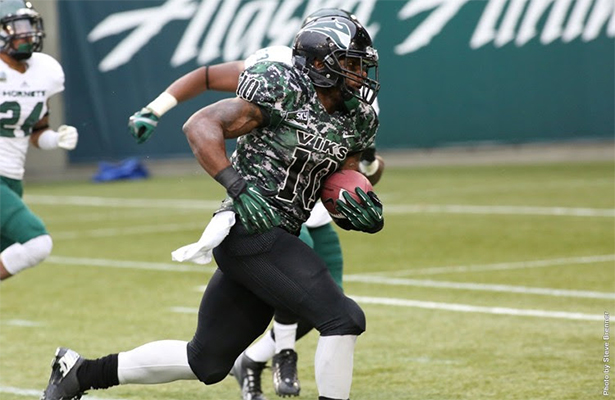 In a game dominated by defense, Viking senior DJ Adams scored a pair of second-half touchdowns.

Adams assured the American team of a 20-3 victory over the National team in the Medal of Honor Bowl All-Star Game, at Johnson Hagood Stadium. The game was a showcase for collegiate seniors and an opportunity for professional scouts to evaluate potential draft picks.

University of Florida wide receiver Solomon Patton accounted for 98 all-purpose yards and set up all three American team touchdowns. Adams scored twice in the second half, on runs of 19 yards and one yard.

Scoring touchdowns has been Adams’ speciality as he had 31 in two seasons at Portland State and 46 overall in four seasons of college football. He comes off an All-American season with the Vikings, rushing for 1,600 yards and 19 scores in 2013.

Adams had only 22 total rushing yards in the Medal of Honor Bowl, but was given the most carries of any back in the game with 13. The American running game had only 84 yards on 32 carries, while the National team managed just 50 yards on 23 carries.

Patton caught three passes for 50 yards, had a rush for 33 and returned a kickoff for 15 more to earn American MVP honors. Deron Furr (Fort Valley State) was the National MVP with six tackles, including a shared sack, and two pass breakups.

The American team got on the board on its first drive when Patton took a reverse 33 yards and Danny O’Brien (Catawba) connected with Jeremy Butler (Tennessee-Martin) for 16 yards to the National one. O’Brien snuck in from there to put his team ahead 6-0.

O’Brien completed 5-of-11 passes for 87 yards while Joe Clancy (Merrimack) hit on 4-of-10 attempts for 88 to lead the American passing attack. Butler had two catches for 77 yards, including a game-long 61-yard grab in the fourth quarter.

The National team got on the board for the only time all day at the outset of the second quarter when Corey Robinson (Troy) completed passes of 16 yards to Troy teammate Eric Thomas and 12 yards to James Baker (Idaho) to set up a 40-yard field goal by Ohio State’s Drew Basil to make it 6-3.

Robinson finished the day with seven completions in 10 attempts for 65 yards while Casey Pachall (TCU) completed 8-of-15 for 54 yards.

The National team fumbled a punt at midfield and Marcus Whitfield (Maryland) recovered. The Americans took advantage, using a 26-yard pass from Clancy to Patton to set up a 19-yard touchdown run by Adams to make it 13-3 with 8:09 left in the second quarter.

Whitfield finished the day with two sacks in addition to his fumble recovery to lead the American defense. Malcolm Butler (West Alabama), playing for the National squad, had the game’s lone interception.

Adams scored again just over a minute into the fourth quarter when his one-yard plunge put the game out of reach. A 16-yard run by Colin Lockett (San Diego State) and a 15-yard pass from Clancy to Patton highlighted the 51-yard drive.