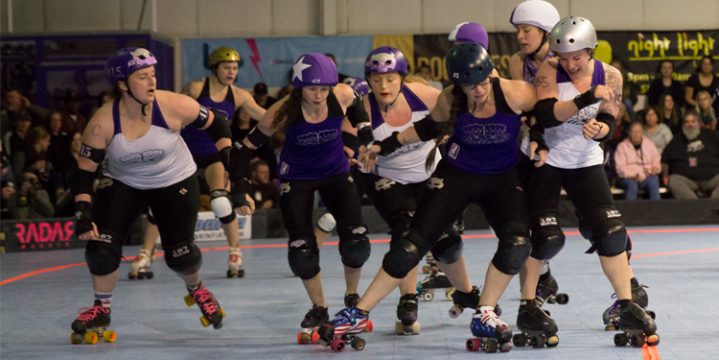 Last night I finally experienced one of Portland’s most awesome traditions: The Rose City Rollers.

Admittedly, I was nervous.

As founder and editor of this website, I’ve shared numerous posts and photos about our local roller derby team. I’ve praised the sport and our nationally recognized team and convinced others to go watch and enjoy. I’ve just never been able to actually attend a bout myself. Until last night.

Worse, I never wanted to admit I didn’t know the rules.

Before the bout began, the emcee asked newcomers to raise their hands. There were surprisingly more than I expected, but the majority of the crowd seemed to be roller derby veterans. Though you didn’t need a show of hands to see who really took this sport serious.

I saw more purple makeup than Mardi Gras. More purple shirts than a Huskies game. More women in capes than I ever expected. It was like a college football tailgate party, complete with PBR and a halftime show.

Thankfully, just before I was to ask how everything works and the match got underway, this amazing video hit the big screen:

It was so much more simple than I expected. After just a few minutes I was completely entranced. With the scoreboard behind me, I couldn’t tell who was winning but I definitely had a good idea (turns out I was usually right). Scoring seemed simple enough, but there were undoubtedly a few instances leaving me and many others confused.

Since last night was an exhibition for the No. 2 roller derby team in the world, an intrasquad scrimmage of sorts, there were more smiles and back-patting than I’m sure a regular match would have. A few times somebody was shoved out of the track and every so often somebody landed on their back or knees. Only once did a skater completely leave the track — and nearly landed in my lap.

Overall, it was entertaining and exhilarating. Following the bout, spectators were allowed to walk on the track and the skaters chatted with their fans. Jessica Shipley, No. 1889, actually skated right up to us like she knew my wife. We asked all sorts of questions and she was genuinely excited to share the sport with us.

But the greatest revelation didn’t come until the very end. My 9-month-pregnant wife was totally into it. I’ve spent years — literally, years– trying to find a sport we can both watch together. She hates baseball, loathes football and won’t watch basketball to save my life.